Immerse yourself into Georgia’s rich history and stunning outdoors. This 8-day long tour spans from east to west and connects the country’s three biggest cities – Tbilisi, Kutaisi and Batumi. Each of them will mesmerize you with its unique beauty and loaded history. Tbilisi, the vibrant capital of Georgia, is truly a multicultural hub.

Here you’ll explore Narikala, the main defender of the city, marvel at the famous sulfur baths and their timeless decor. You’ll walk through the narrow streets of Tbilisi Old Town where the present merge. Kutaisi with its spectacular sights will charm its way into your heart. According to the famous myths and legends of Ancient Greece, it is here that the Golden Fleece was kept before the Argonauts stole it with the help of  Medea, the king’s beautiful daughter. Prometheus cave, another one of our destinations, was made famous by yet another legend. It is said that Prometheus, called Amirani in Georgian folklore, was chained inside one of the caves. A boat will take you across the underground lake, while you relax and get lost in the innate beauty of this magical place.

Sataplia is no less impressive. Here you can marvel at the footprints of dinosaurs, explore even more caves and discover ancient plants on your route. The Gelati Monastery will leave you speechless with its stunning mosaic fresco. On our way to Batumi, we’ll drive through the Kolkheti National Park that happens to be home to a great variety of flora and fauna. In Poti, we’ll see the Poti Cathedral that was built as an imitation of timeless Hagia Sophia in Istanbul.

After a day of relaxation on Batumi’s exquisite beaches, we’ll get to explore some of the city’s architecture. The botanical garden situated on an elevation 220 meters from the sea level, offers beautiful lookout at the Black Sea as well as great varieties of flora. 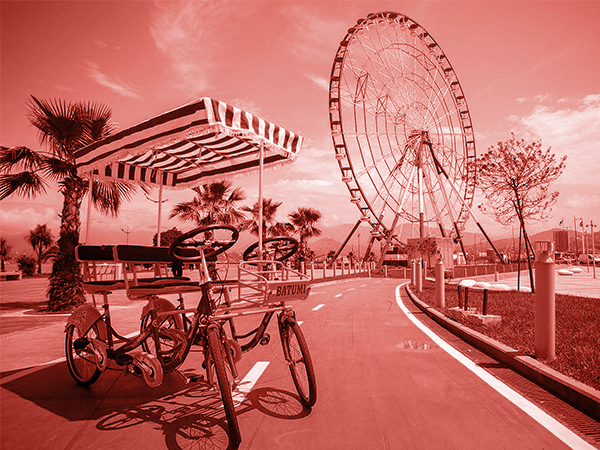 TRADITIONAL DINNER
On our way to Mtskheta we’ll stop to recharge at a local restaurant serving a variety of delicious local foods and rich wines.

CASINO NIGHT
In the evening you’ll get a chance to try your luck in one of Tbilisi’s famous casinos.
-
Overnight stay in Tbilisi.

GELATI MONASTERY COMPLEX
Gelati is a medieval monastic complex near Kutaisi, in the Imereti region of western Georgia. A masterpiece of the Georgian Golden Age, Gelati was founded in 1106 by King David IV of Georgia and is recognized by UNESCO as a World Heritage Site
-
Overnight stay in Kutaisi.

Hotel pickup after breakfast.
-
KUTAISI SYNAGOGUE
Also called the Great Synagogue it is one of three synagogues in Kutaisi.
It was built in 1885 and is the second largest synagogue in Georgia, right after the great synagogue in Tbilisi. Nowadays it serves a small, local Jewish community.

PROMETHEUS CAVE
Prometheus Cave is the largest cave in Georgia and a favourite tourist destination. The total length of the cave is about 11 km, of which 1060 meters are open to visitors. It’s surrounded by a 3km long specifically designed landscape area making the cave structure easier to navigate and enjoy.
-
Overnight stay in Kutaisi.

DAY 5: ON THE WAY TO BATUMI

Hotel pickup after breakfast.
-
KOLKHETI NATIONAL PARK
Kolkheti National Park is located in Samegrelo-Zemo Svaneti and Guria in the historical region of Colchis in western Georgia. The park covers an area of 28,940 hectares and with protected wetlands protected area spans to 33710 hectares. It’s home to many endemic species of flora and fauna.

POTI CATHEDRAL
Poti Soboro Cathedral is a Georgian Orthodox church in downtown Poti that thanks to clever planning can be seen from every part of the city. The cathedral is an imitation of Hagia Sophia in Istanbul, and it was built in 1906-07 with the great contribution of Niko Nikoladze, the mayor of Poti.
-
Overnight stay in Batumi.

On this day you are free to roam the streets of Georgia’s most beautiful coastal town Batumi, enjoy a traditionally prepared cup of coffee, take a bite of local "Boat" Khachapuri and relax on the beach. You'll also get a chance to explore the underwater world of the Black Sea. Explore shipwrecks in Kvariati, sunken Mussel farm & rock alley in Sarpi or dive with dolphins at Batumi Dolphinarium.
-
Overnight stay in Batumi.

Hotel pickup after breakfast.
-
BATUMI PIAZZA
The piazza is one of the most visited and popular sights of the Batumi. It is an Italian-style open public area in the city of Batumi, Georgia. Various significant buildings surround the piazza which has open-air cafes, hotels, and shopping opportunities.

ALI AND NINO
Ali and Nino is a moving sculpture designed by Georgian sculptor Tamara Kvesitadze. It depicts the two lovers from Kurban Sayid’s same-titled book. The steel statue begins to move every day at 7 p.m., merging for a short embrace, before leaving each other behind.

BATUMI BOTANICAL GARDEN
The Batumi Botanical Garden, located at Mtsvane Kontskhi ("The Green Cape") on the Black Sea shore covers a 108-hectare area of land and is one of the largest botanical gardens in the former Soviet Union. Boasting one of the widest varieties of flora in the world, Batumi Botanical Garden was established in 1912 by the prominent botanist and geographer Andrey Krasnov. Currently, the garden contains flora from nine phyto-geographic areas.

GONIO FORTRESS
Gonio fortress is a Roman fortification 15 km south of Batumi, at the mouth of the Chorokhi river. The first mentions of the structure date back to the 1st century. Saint Matthias, one of the twelve apostles, is believed to be buried inside the Gonio fortress.
-
Overnight stay in Batumi.