From the vibrant capital Tbilisi, through picturesque Kakheti and the holy city of Mtskheta, all the way to majestic Jvari Monastery –  visit the most extraordinary places in Georgia.
Roam the busy streets of Tbilisi and discover centuries-old architectural masterpieces hidden in plain sight. Ride the ropeway to Narikala fortress and enjoy stunning views of the city spread out at the foot of Mtatsminda mountain.  Tasty adventures await you in Kakheti. You’ll get to try the most extraordinary local wines in Tsinandali as well as learn how Georgian vintners have been making wine in Qvevri following centuries of tradition that is native to Kakheti. In Telavi, you’ll explore museums and castles and take a walk down the famous Cholokashvili street.
Take a postcard-perfect photo posing in front of cute traditional homes with colourful facades and wood carved balconies in Sighnaghi and feel loved in the city of love. 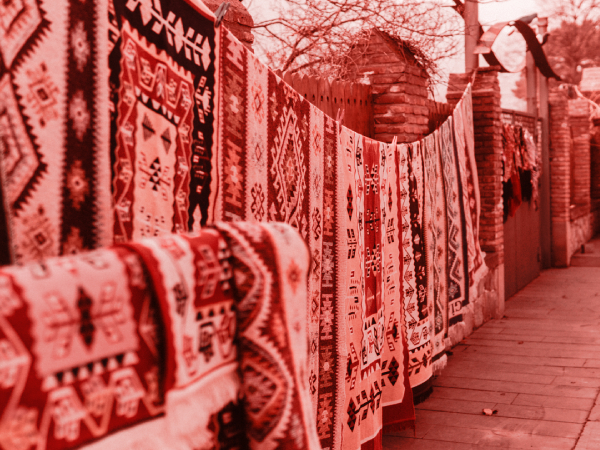 Visit the local market and discover the wonderful world of handcrafted goods.

One of our experienced drivers will pick you up from the airport and drive you to the hotel.
Depending on the time of your arrival, you'll be welcomed by a traditional lunch or a dinner with Georgian entertainment program.
-
Overnight stay in Tbilisi.

PEACE BRIDGE
The Bridge of peace is a bow-shaped pedestrian bridge that connects the two banks of the river Mtkvari. Made predominantly out of steel and glass and illuminated with numerous LEDs it’s one of the most visited contemporary structures in Tbilisi.

DAY 3: KAKHETI - THE CRADLE OF WINE

GOMBORI PASS
Tsiv-Gombori is a mountain range in the Georgian part of the Greater Caucasus mountains. It’s famous for its remarkable beauty, especially during the fall when the tree leaves turn into so many vivid yellows and reds.

ALAVERDI MONASTERY
Alaverdi Monastery is one of the most important religious monuments of the medieval era in Georgia. It was built at the beginning of the 11th century and was the tallest church in the country up until 2004 when the Sameba Cathedral was completed in Tbilisi.
Apart from being one of the most important religious landmarks in Georgia, situated in the heart of the world's oldest wine region, Alaverdi is also famous for its cellar. The monks have been making wine here for centuries.

LUNCH
We’ll taste traditional foods at one of the local restaurants.

TSINANDALI MUSEUM
Tsinandali is a village in Kakheti, Georgia, noted for the estate and its historic winery which once belonged to the 19th-century aristocratic poet Alexander Chavchavadze (1786–1846).

BODBE MONASTERY
The St. George's Monastery of St. Nino, sometimes also called the Bodbe Monastery, is one of the most important religious sites in Georgia. It houses the remain of St. Nino, the most central figure in Georgia’s conversion to Christianity, who devoted her life to healing people and preaching Christianity throughout the country.

WINE TASTING
We’ll stop at a local winery where you will get to learn more about traditional winemaking techniques as well as try various wines from the grape rich Kakheti region.
-
Arrival in Tbilisi at 8 PM.
Overnight accommodation in Tbilisi.

Hotel pickup at 11 AM.
-
THE CITY OF MTSKHETA
Mtskheta is a city one of the oldest cities of Georgia. It's the main attraction, the Svetitskhoveli Cathedral was built in the 3rd century and is the oldest and most famous Orthodox church in Georgia and an important religious destination for pilgrims from all over the world. The cathedral and its surroundings became a UNESCO World Heritage Site in 1994.

JVARI MONASTERY
Jvari Monastery is a sixth-century Georgian Orthodox monastery overlooking Mtskheta and the junction of the two Aragvi rivers with Mtkvari river.

LAST MINUTE SHOPPING & AIRPORT TRANSFER
On our way to the airport, we’ll make a small detour to the East Point Shopping mall, where you’ll be able to get your shopping fix, watch a movie or have a meal before your Georgian holidays are officially over.

Cancellation within 10 Day(s) before the date of arrival 40% will be charged.
Loading Maps
Featured