On this 3 day journey through Samtskhe Javakheti region, we set out to explore some of the most monumental and momentous places to visit in Georgia.
Explore the capital city Tbilisi, where old and new merge in all the unexpected ways, adding more flare to the already mysterious and inviting demeanour.

Visit the Mtskheta old town, UNESCO’s World Heritage Site since 1994, and its main attraction Svetitskhoveli, the “lifegiving pillar” upon which the first Christian church in Georgia was built. Enjoy the view of two powerful Aragvi rivers coming together as one from the rocky mountain where yet another impressive example of Georgian religious architecture – Jvari Monastery is situated. In Borjomi, you’ll get a chance to taste the world famous mineral water straight from the spring and revel in the beauty of the surrounding Borjomi-Kharagauli National Park. Rabati Castle and its mixed architecture will tell you enthralling stories of many wins and defeats. Stepping a foot inside the rock hewn Vardzia complex, you’ll travel back in time to and experience first hand how life was back then, unravelling the mysteries of life in the 12th century, everything from medieval sewer systems to hidden passages to ensure safe passage for the city’s most prominent inhabitants. 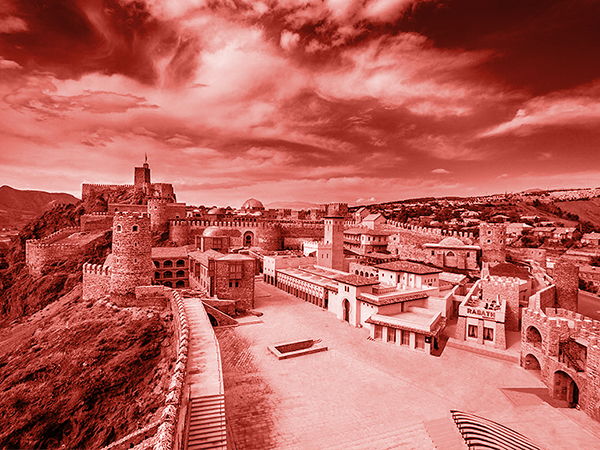 Taste the explosion of flavours that make Georgian cuisine so unique

Revel in the unique beauty of Georgian nature

Our driver will pick you up at the airport and drive you to the hotel.
Depending on the time of your arrival, you'll be welcomed with a traditional lunch or a dinner with Georgian entertainment program.
-
Overnight stay in Tbilisi.

Pick up at the hotel at 10 AM.
-
METEKHI CHURCH
Metekhi is a historic neighbourhood of Tbilisi, Georgia, located on the elevated cliff that overlooks the Mtkvari river.

DINNER
On our way to Mtskheta, we’ll stop at a local restaurant. You’ll have a chance to try a variety of delicious local foods and rich wines.

Hotel pickup after breakfast.
-
BORJOMI
The city is noted for its mineral water industry (which is the number one export of Georgia), the Romanov summer palace in Likani, and the Nature-site Borjomi-Kharagauli National Park.

LUNCH
In Borjomi, well stop to have lunch at a restaurant and enjoy nature.

RABATI FORTRESS
Founded in the 9th century under the name of Lomisa castle, Rabati Fortress has seen a lot of action defending Akhaltsikhe and surroundings from invasions. It was completely rebuilt but Ottomans in the 13th century.

KHERTVISI FORTRESS
Khertvisi fortress is one of the oldest and surviving fortresses in Georgia that date to the feudal period. The church was built in 985. The present walls are from 1354.

DINNER
On our way back we’ll stop in Borjomi for more nourishment.
-
Tour ends in Tbilisi at 21:30.