If you plan to visit Georgia, Tbilisi and Mtskheta are the destinations you shouldn’t pass on. Tbilisi, being the capital and largest city in the county with approx.1.5 billion inhabitants, offers a great variety of historical sights and cultural activities.
During our tour you’ll visit iconic landmarks such as Sulfur baths, Abanotubani district, Shardeni street, Metekhi church and Sioni Cathedral as well as Sameba Holy Trinity, the third-tallest Eastern Orthodox cathedral in the world. The ropeway will lead you to the postcard of Tbilisi, the Narikala Fortress that has been looking over and out for the city for over 14 centuries. From there you can enjoy the mesmerizing views of tightly knitted narrow streets of Tbilisi Old town and the main artery that runs through the city –  Mtkvari river. For those of you who would like to have a closer look, we’ll also cross the Peace bridge that connects the two banks of the river Mtkvari and is one of the few examples of contemporary architecture in the city. The next stop, Mtskheta, is an old capital of Georgia and one of UNESCO World Heritage sites. The city of Mtskheta has been Georgia’s spiritual heart since Christianity was established here in about 327 AD. Its main attraction, the impressive Svetitskhoveli Cathedral is the most famous church in the country as well as one of the most popular spiritual destinations for pilgrims worldwide. 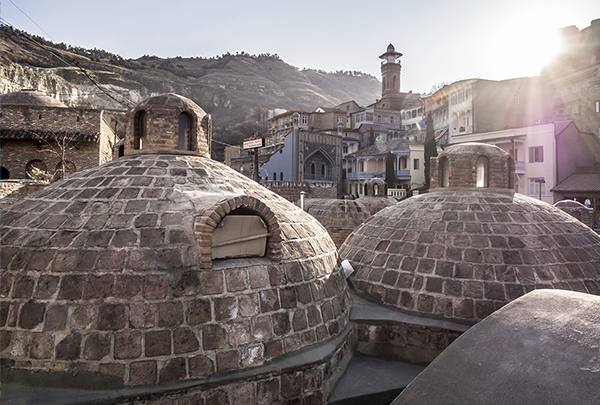 THE FIRST HALF OF THE TOUR - TBILISI

Tour starts at 10 AM.
-
METEKHI CHURCH
Metekhi is a historic neighbourhood of Tbilisi, Georgia, located on the elevated cliff that overlooks the Mtkvari river.

SAMEBA HOLY TRINITY
The Holy Trinity Cathedral, commonly known as ‘Sameba’, has been serving as the main cathedral of the Georgian Orthodox Church ever since its completion in 2004.

LEGVTAKHEVI WATERFALL
Tucked away just behind the famous Sulfur Bats, Legvtakhevi and it’s waterfall offers a picturesque chunk of nature right in the heart of the historic city.

On our way to Mtskheta, we’ll stop at a local restaurant where you can enjoy a great variety of traditional foods and local beverages.

THE SECOND HALF OF THE TOUR - MTSKHETA

$36 / The secrets of old Tbilisi: A blend of Eastern enigma and Western elegance

Tours Nearby $36 / The secrets of old Tbilisi: A blend of Eastern enigma and Western elegance