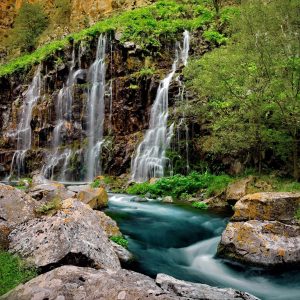 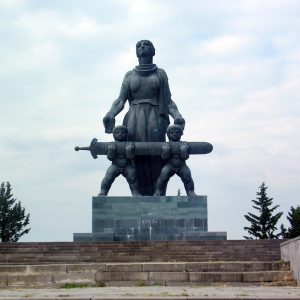 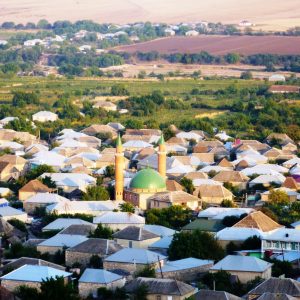 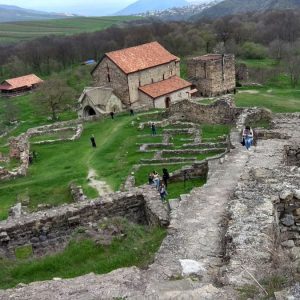 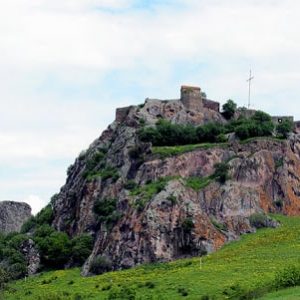 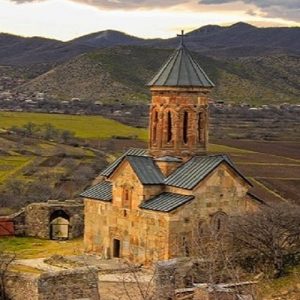 Kvemo Kartli has a rich cultural heritage complete with ancient castles, churches and monasteries. The region is also famous for its natural beauty, comprising beautiful canyons, lakes, waterfalls, mineral springs, forested gorges, alpine meadows and colorful deserts. Thanks to its unique archaeological sites, Kvemo Kartli also boasts the distinction of being home to the first humans in Europe.

THE HISTORY OF KVEMO KARTLI

Kvemo Kartli (Lower Kartli) is a historic province and region in southeastern Georgia country. The city of Rustavi is its regional capital. Since antiquity, the territory of Kvemo Kartli has been inhabited by Kartvelian tribes such as the Gogars.

During the 7th to 11th centuries, the Tbilisi Emirate, the Duchy of Kldekari and the Kingdom of Tarish-Dzorageti were established at various times on the area of Kvemo Kartli. From the 12th to the 13th centuries, the border duchies of Lori and Gaga were also established here.

Following the 13th century Mongol invasion, Georgia lost its Duchy of Khunan and its state border was relocated to the Ksia-Mtkvari border. In the 15th century, nomadic Turkmen tribes began settling in the region. At the same time, noble families were established in Kvemo Kartli, such as the Sabaratiano and the Saorbeliano.

During the 17th century, Shah Abbas of Iran settled the nomadic tribe of Borchalo within the Debed Valley and established the Lori Khanate. In the 18th century, following invasion by the feudal lords of Leki, Kvemo Kartli gradually lost its indigenous population.

Many were sacrificed to the enemy, while others escaped to other areas in Georgia, their places being taken up by different tribes. This is the main reason for the ethnic diversity in Kvemo Kartli today.

For the next two centuries, Kvemo Kartli would endure the same fate as the rest of Georgia after the country was annexed by Imperial Russia in 1801. This then gave way to Soviet rule in the early 1900s. Since independence in 1991, the Georgian government has taken steps to make Kvemo Kartli a worthy tourist destination in modern Georgia.

PLACES TO VISIT IN KVEMO KARTLI

Part of Greater Kartli, Kvemo Kartli is divided into one city, Rustavi and the 6 municipalities of Tetritskaro, Bolnisi, Dmanisi, Tsalka, Gardabani and Marneuli – all of which offer an array of Georgia destinations.

The Birtvisi Natural Monument comprises a scenic landscape of volcanic rocks, nestled in the Algeti River gorge, on the outskirts of the Trialeti Range. It is located at a Georgian altitudinal zone of 950-1050m above sea level, to the north of Tbisi Village, adjacent to the Algeti National Park. Its formidable natural obstacles of cliffs and canyons provided the ideal location for the historic Birtvisi Fortress.

Located near Partskhisi Village, Birtvisi is a ruined medieval fortress nestled among limestone cliffs. Essentially a natural rocky fortress, Birtvisi spans one square kilometer. It is secured by walls and towers, the most prominent of which is Sheupovari, which rests atop the tallest rock in the area. Various other structures including an aqueduct have survived.

Birtvisi Fortress was first mentioned in 11th century written sources. In medieval Georgian times, it enjoyed the reputation of being an impregnable stronghold whose master could control the strategic Algeti River gorge.

Samshvilde is one of Georgia’s oldest historic walled towns, of which only ruins are left. Visitors can wander through the stronghold which was constructed near the confluence of 2 rivers, on a natural landscape bordered by ravines, and enjoy stunning views of the Samshvilde Canyon.

The ancient Georgian town was the center of the Duchy of Samshvilde from the founding of the Kartli kingdom. Ancient ruins, caves, menhirs and other landmarks dotting the city date from the 4th millennium BC.

The Algeti National Park is a protected area that stretches along the Upper Algeti Valley at the forested southern slopes of the eastern Trialeti Range, its highest point being Mount Kldekari (2,000m). The park was originally established as a state reserve in 1965 to protect Georgian nature of the Nordmann fir and Caucasian spruce.

The main church may have been constructed in the early 13th century, during the reign of George IV. The domed church has a cross-in-square plan, similar in design to the Betania, Kvatakhevi and Timotesubani monasteries. Its façades are decorated, accentuating the niches and dormers. Once entirely frescoed, the interior today only has fragments of murals.

Pitareti Monastery was a property and burial ground of the noble Kachibadze-Baratashvili family and their offshoots – the Orbelishvili princes. It thrived until 1752 when it was forced to close because of attacks from Dagestan invaders.

Dating from the 6th – 7th century, Manglisi Sioni is a Georgian Orthodox cathedral located near Manglisi town. The present-day church was built on the site of the original 4th century church, and underwent a major restoration in 1002. According to a rock-carved inscription above the gate, the walls around the church and their towers were built in the 17th century by Bishop Arseni.

In the 4th century, Bishop Ioanne arrived in Manglisi and began building a church using parts of wood obtained from the “True Cross.” This was the first church in Manglisi, and one of the first Christian churches in Georgia.

Gudarekhi Monastery is a 13th century Georgian Orthodox monastery situated west of Gudarekhi Village. The monastic complex comprises the main hall church, a free-standing bell-tower and ruins of different buildings including a palace, chapels, cells, wine-cellar and stables. The church is decorated with medieval stone-carvings and inscriptions.

Kldekari Fortress is located on a rocky peak within the Trialeti Range. Essentially, the fortress was built on a strategic mountain at an important crossroads to control a caravan road cutting through the cliff connecting Eastern Georgia with its southern neighboring countries and the Byzantine Empire.

The territories of Tsalka and Manglisi, as well as the gorges of the Tana and Tedzami rivers are visible from the fortress.

Built during the second half of the 9th century, the border stronghold witnessed many battles. Although it is heavily damaged, its remains – including traces of palaces and towers, show that it was a large structure. Nevertheless, the ruined fortress, its location and panoramic vistas are quite impressive.

Prince Sulkhan-Saba Orbeliani was a member of the royal Bagrationi dynasty in the 17th century. A key figure of the Georgian renaissance, Orbeliani was a remarkable storyteller, translator, lexicographer, scientist and diplomat.

Situated in Bolnisi Village, Bolnisi Sioni is a 3-storey Georgian orthodox basilica built in 478-493. One of the oldest of its kind in Georgia, the church interiors feature several paintings from later periods.

The church also has preserved fragments of ancient inscriptions, and is adorned with unique three-dimensional sculptures including a bull’s head, various animals and birds, as well as different types of crosses and other ornaments.

Also known as the Queen’s Stronghold, Kolagiri Fortress was built by Queen Darejan at the end of the 18th century. It is one of the last standing fortresses in the Kartli-Kakheti regions. Spanning 2,000 square meters, the cube-shaped fortress is built using raw stone and bricks to decorate the entrance towers.

Dmanisi is a townlet and archaeological site famous for being the place where the oldest human remains in Europe were discovered. At 1.75 million years old, the unique findings also include many well-preserved remains of animal bones and stone tools.

The prehistoric Georgian site is buried below the medieval ruins of an ancient town and fortress known as Dmanisi. Located in the Mashavera River Valley, the site is nestled on a promontory 80m above the confluence of the Mashavera and Pinezaouri River valleys.

Dmanisi boasts the richest and most complete collection of early human remains outside of Africa. In fact, its discoveries have weakened the evolution theory premise that the first humans migrated to Europe from Africa. Dmanisi has been included on the Tentative List of UNESCO World Heritage Sites.

Tsughrughasheni is a Georgian Orthodox church situated 2km from Bolnisi Sioni, on the right bank of River Bolnisistskali. The church was constructed in 1212–1222 by King George IV Lasha of the Bagrationi Dynasty.

The architectural style of Tsughrughasheni is similar to other Georgian churches of the 12th – 13th centuries, such as Betania, Pitareti and Kvatakhevi, although it is smaller and has a higher cupola. The church is richly adorned with traditional Georgian ornaments.

Lovers of the outdoors can go hiking at the Dashbashi Canyons, one of the most remarkable natural landmarks of Georgia. Dashbashi derives its name from the Turkish word which means “stone-head.” Famous for its remarkable diversity, the canyon is carved by the River Ktsia, running through volcanic rock.

The Martkopi Monastery of the Deity is a Georgian Orthodox monastery situated near Martkopi Village, on the wooded southern slopes of the Ialno Range. Dating from the 6th century, the monastery is linked to Saint Anton, one of the Thirteen Assyrian Fathers. Most of the monastery’s structures were built in the 17th – 19th centuries.

The current complex consists of the main domed church, a bell-tower, a tower, and various other structures. Featuring Persian influences, the bell-tower was built in 1699 and is similar to others of the period, such as those at Urbnisi, Anchiskhati, and Ninotsminda. Nestled on a hilltop to the east is a 30m high tower overlooking the monastery known as Monk Anton’s Pillar.

Situated close to Akhkerpi Village, near Georgia’s border with Armenia, Khujabi Monastery (also Khuchap) is a monastery dedicated to Our Lady of Iviron. Its décor, style and proportions are similar to other 12th – 13th century monasteries such as Akhtala, Betania and Kvatakhevi.

Heavily carved, its facade is covered with stone in the color of wine and gold. The interiors are painted with orthodox icons, and have preserved inscriptions in the Georgian alphabet of Asomtavruli. Besides the main church, Khujabi Monastery comprises several ruined buildings.

Tserakvi is a Georgian orthodox monastic complex dating back to the 12th to 13th centuries. Bordered by River Shularevi, the monastery is situated near Tserakvi Village. The complex comprises the churches of Saint George and the Assumption, a bell-tower, wine-cellar, and the remains of a defensive wall. The Church of the Assumption is a 3-nave hall-church that contains 15th century wall inscriptions.

Kvemo Kartli weather is characterized by a humid subtropical-continental climate in the plains. The best time to visit Kvemo Kartli is during the summer months of May through September, when it is warm and perfect for sightseeing.

HOW TO GET TO KVEMO KARTLI

For Georgia flights landing in Tbilisi airport, you may hire a car and drive to Kvemo Kartli. But driving in the country of Georgia can be daunting if you don’t speak the Georgian language or understand the Georgian alphabet. The best option would be to travel to Kvemo Kartli via private transfer.

Go hiking up to medieval fortresses with panoramic views of lush landscapes. Explore breathtaking canyons with waterfalls in summer or enjoy an off-road adventure jeep tour in winter. Whatever tickles your fancy, Kvemo Kartli guarantees a fantastic vacation in Georgia!

There’s always accommodation available in Kvemo Kartli hotels and vacation rentals, but do book ahead with our Georgia tourism service if you’d like to stay in the better options. We can also arrange Kvemo Kartli rental cars or for you to visit Georgia with private transfers to and from Tbilisi airport.

Alternatively, create your very own custom vacation package that includes the specific places you want to see and things you want to do in Kvemo Kartli. Curious about Early Man? Order your custom tour to Kvemo Kartli today and walk in the very footsteps of the first Europeans! 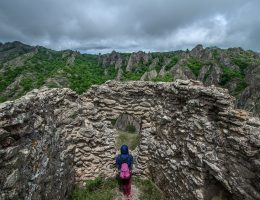 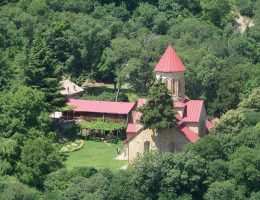