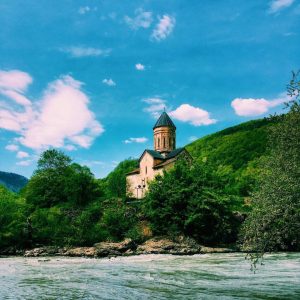 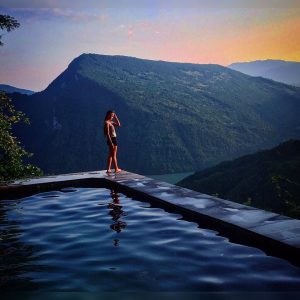 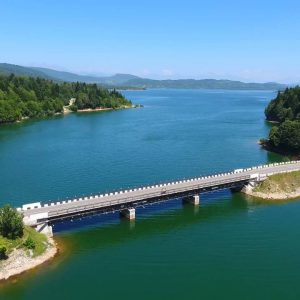 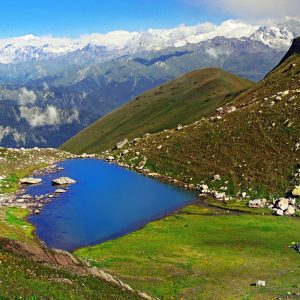 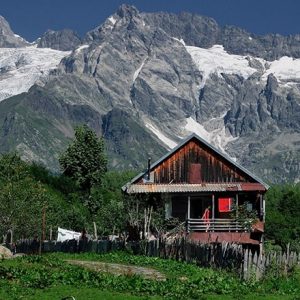 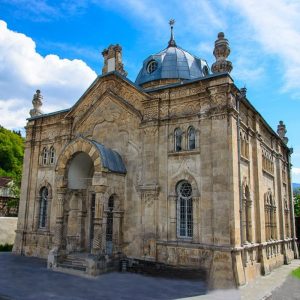 Boasting stunning landscapes of mountain forests and alpine meadows, Racha-Lechkhumi is a beautiful and unspoiled natural wonderland. It also has some remarkable cultural treasures, with attractive churches and monasteries dating back to the Middle Ages.

For most visitors, Racha-Lechkhumi is a giant outdoor playground offering plenty of things to do in Georgia. The region is popular with rafters and anglers drawn by its raging rivers filled with trout, as well as paragliders and mountain bikers.

THE HISTORY OF RACHA-LECHKHUMI

Racha is a highland area in western Georgia. It is divided into 2 administrative units comprising the municipalities of Oni and Ambrolauri, with Oni City as its capital.

Since antiquity, Racha has been a part of Colchis and Caucasian Iberia. Oni City, is believed to have been established during the 2nd century BC by Iberian King Parnajom. Coins of the Colchis Tetri – the first money minted by the kingdom, were discovered here. In the 11th century, following the unification of the ancient Georgian monarchy, Racha was made one of its duchies.

Rati of the noble Baghvashi family was appointed by King Bagrat III as Racha’s first duke. Descendants of Rati and his son Kakhaber – founder of the ruling Kakhaberisdze dynasty, controlled the duchy until 1278, when King David VI Narin abolished it during war with the Mongols. In the mid-14th century, the duchy was restored under the rule of the Charelidze family.

The next dynasty of Chkhetidze ruled Racha from 1465 to 1769. Vassals of the Imeretian king, they rebelled severally against the monarchy, with the civil war of 1678–1679 resulting in the most severe consequences.

During this war, Duke Shoshita II of Racha (1661–1684) supported Prince Archil, a rival of the pro-Ottoman King Bagrat IV of Imereti. Upon Archil’s defeat, Racha was plundered by the Ottomans.

During Rostom’s reign (1749–1769), Racha became more or less independent from Imereti. However, towards the end of 1769, Imeretian King Solomon I arrested Rostom and abolished the duchy.

By 1784, Imeretian King David II had restored the duchy and gave it to his nephew Anton. Local opposition tried to use Ottoman forces to take over Racha. But King David’s victory in 1786 at Skhvava temporarily secured his dominance. In 1789, the next Imeretian monarch Solomon II finally abolished the duchy and subordinated the province to direct royal administration.

In the early 1800s, the Imeretian Kingdom became part of the Russian Empire, and the territory of Racha was formed into an administrative unit. It remained as such during Soviet rule.

Lechkhumi is a historic province that includes the area along the middle basin of the rivers Rioni and Tskhenistskali, as well as the Lajanuri River valley. It consists of Tsageri municipality, along with parts of the Ambrolauri and Tskaltubo municipalities.

The territory of Lechkhumi has been inhabited since the Neolithic Age and was later dominated by the Colchian culture. In ancient times, the region was called Sarkineti – “the Land of Iron.”

The area was first mentioned in written sources from the early medieval era. The region is normally identified with Scymnia mentioned by Procopius (6th century AD) as a dependency of the Kingdom of Lazica. Scymnia was governed by a duke under the King of Egrisi.

Following the unification of the Kingdom of Abkhazia with the unified Georgian monarchy in the 10th century, Scymnia lost its self-governing status and was merged with the regions of Takveri, Racha and Okribi. Later, Lechkhumi became independent with Laila town as its economic center.

Within the unified Kingdom of Georgia (11th to 15th centuries), Lechkhumi was ruled by the dukes of Svaneti and then Racha. Upon the disintegration of the Georgian kingdom, the province came under the Imeretian Kingdom in 1455.

Following constant feudal conflict, the noble Chikovani family eventually won and installed themselves as the semi-autonomous rulers of Lechkhumi. In 1714, Bejan Chikovani became Prince of Mingrelia, and assumed the dynastic name of Dadiani.

On several occasions, King Solomon II of Imereti (1792-1810) tried but failed to bring Lechkhumi back under Imeretian rule. Imperial Russia’s intervention on the side of Mingrelia resulted in the fall of Solomon II and the incorporation of Mingrelia into the Russian Empire as an autonomous entity.

In 1857, the Russians abolished the Mingrelia Principality and Lechkhumi became part of the Kutais Governorate. Along with the neighboring Svaneti region, it formed the Lechkhumi district from 1867 to 1930 when Tsageri municipality was created.

PLACES TO VISIT IN RACHA-LECHKHUMI

Racha-Lechkhumi is famous for its natural beauty, wine-making, health resorts and, like most of Georgia, for its hospitality. Visitors can expect a warm welcome from friendly locals who enjoy sharing their slice of paradise, and its wonderful array of places to visit in Georgia.

Dating from the 11th century, Nikortsminda Cathedral of St. Nicholas is richly decorated with religious scenes, the figures of Saints, as well as real and fantasy creatures. Inlaid with light-colored brick, the facades are adorned with sculptures, while its interiors are decorated with 16th – 17th century murals.

Built in 1753, Barakoni Church of the Mother of God is situated in Tsesi Village. Nestled atop a steep cliff, it overlooks River Rioni at its confluence with River Lukhuni just below the mountain. The church is one of the important examples of medieval Georgian architecture.

Shaori Reservoir has many karst funnels, caves and wells to explore. In autumn, colorful trees of the surrounding Nakerala range and Mount Satsaliki are reflected in the reservoir waters, creating a fairy-tale land. The reservoir is also popular with anglers who come fishing for its huge carp.

Dating back to the 11th century, Khotevi Village has remnants of the Church of the Archangel, and a temple, both of which were built in the 13th century. There are also ruins of the 16th – 17th century Khotevi Fortress, a two-storey walled fortress.

Ambrolauri is famous for its amazing wine routes and local Georgian wine “Khvanchkara” – a semi-sweet red wine said to have been Stalin’s favorite. There are several wineries in the district where connoisseurs can enjoy wine tasting tours, as well as dine on delicious Georgian food.

The Rioni River is one of the top white-water rafting destinations in Georgia. The best time to go rafting on the Rioni is between mid-March and early October. The Rioni is also a popular bird watching destination.

Oni is an attractive, rustic town that attracts locals and adventurous tourists with its remote setting, natural beauty and traditional culture. It is also the perfect base for day trips to the surrounding regions. Attractions include its Archaeological Museum which displays many fascinating relics.

Oni Synagogue is a beautiful building with arched windows and a round silver-colored dome. The inner ceiling is inlaid with several small skylights, and its panel features an Impressionist mural of colorful mountains beneath a purplish horizon. Polished wooden benches are stacked high with prayer books.

In Gebi Village, Late Bronze Age burial mounds unearthed Georgian artifacts such as bronze belts, the head of a silver bull, as well as the remains of metalwork dating from the 16th – 10th centuries BC. Gebi was the only tower-type settlement in Racha, with only a few towers still standing today.

The most beautiful village in Racha, Chiora is located at a Georgian altitudinal zone of 1,360m above sea level, on the southern slopes of the Greater Caucasus range. Only a few defensive towers and 2 small churches remain standing in Chiora.

Shovi is an alpine climatic resort sprawled out over the plains of Racha. It is famous for its large areas of coniferous and mixed forests, and permanently snowy glaciers. Shovi has 16 amazing mineral water springs used to treat various ailments. It is also a popular destination for mountain climbing.

Utsera boasts 28 mineral water springs whose waters are used for both drinking and taking therapeutic baths. The resort also offers natural aromatherapy thanks to its magnificent groves of coniferous trees and mixed forests.

Straddling the districts of Tsageri and Tskaltubo, Mount Khvamli (2,002m) is a rocky massif situated between the gorges of the Rioni and Tskhenistskali Rivers. From its summit, trekkers can enjoy panoramic vistas of the Nakerala range, Racha, Tkibuli, as well as Likhi and the Adjara-Imereti Mountains.

The mountain has a freezer overpass where, even in the heat of summer, icicles are formed. At the top of River Lakhepisgele is a lake, which is a great spot for camping. A unique natural wonder of the mountain is its 16m-deep karst well. Khvamli is also the starting point for the Nikordziri River, which creates a 30m high waterfall in the lower stream.

A mountain of legend, Khvamli (also Khomli) is believed to be the mystic place to which Jason and the Argonauts, legendary heroes from Greek myths, traveled. It is also said to be the mountain to which Zeus chained Prometheus as punishment for teaching mankind how to make fire.

Located in Bardnala Village, the house of famous Georgian poet Lado Asatiani is a museum preserved as it was at the start of the 20th century, complete with a carved balcony, wooden staircase, roof tiles and a beautiful yard. The house-museum displays a collection of memorabilia from the poet’s life. Each summer, the village holds a celebration – Ladooba, in honor of the poet.

The Tsageri History Museum houses artefacts from the Bronze Age and Antiquity periods discovered in the Lechkhumi and Kvemo Svaneti regions. These include rare 19th century books and a collection of coins such as the Colchis Tetri and coins of Alexander the Great. Museum buffs can also visit the nearby Lado Museliani Lentekhi Local Museum of Kvemo Svaneti.

Lashichala Resort is located 20km from Tsageri on the southern slopes of the Lechkhumi range. Nestled among forests of fir, pine and spruce, the resort has a low mountain climate ideal for climactic therapy. Visitors come to drink and take therapeutic baths in the resorts mineral springs to cure various diseases.

Sairme Rocks are located in Tsageri near the village of Sairme. Shaped like triangular towers and horns, the interesting rocks rise several tens of meters and are used for training rock climbers. In the surroundings are ruins such as Labechina, a hall church dating back to the Middle Ages.

Zeskho is a 19km long gorge located on the River Tskhenistskali basin, 34km from Tsageri. The gorge is a popular destination for lovers of extreme and active holidays. Ailama (4,546m) is a peak in Zeskho Gorge, ideal for professional climbers, while Zeskhalo (1,850m) is for amateurs.

From Zeskho Gorge, you can access Muashi Resort in Kvemo Svaneti. Nestled on the southern slopes of the Svaneti range, the health resort is popular for its mineral springs, and offers mineral water baths and passive climate therapy.

Also on the Svaneti range are several mountain passes that connect Kvemo Svaneti to Zemo Svaneti. Latpari Pass (2,830m) is a popular route for trekkers that offers a scenic hike. Other passes include Lasili (3,086m) and Atkveri (2,623m).

THE BEST TIME TO VISIT RACHA-LECHKHUMI

HOW TO GET TO RACHA-LECHKHUMI

For Georgia flights landing in Kutaisi airport, you may take a domestic flight to Ambrolauri Airport and then hire a car and drive to Racha-Lechkhumi. But driving in the country of Georgia can be daunting if you don’t speak the Georgian language or understand the Georgian alphabet. The best option would be to travel to Racha-Lechkhumi via private transfer.

There are some destinations that stay with you, if only for the amazing connections, thrilling new adventures and intoxicating experiences that are unlike anything you’ve had before. An incredible region guaranteed to deliver memorable moments, Racha-Lechkhumi is one of those places.

There’s always accommodation available in Racha-Lechkhumi hotels and vacation rentals, but do book ahead with our travel service if you’d like to stay in the better options. We can also arrange Racha-Lechkhumi rental cars and/ or organize Georgia turs with private transfers to and from Ambrolauri Airport. 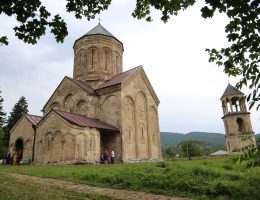 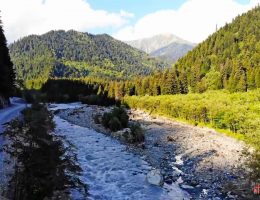