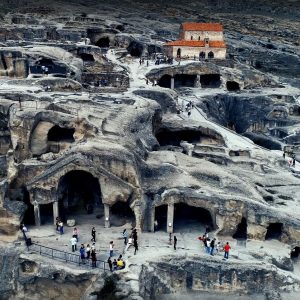 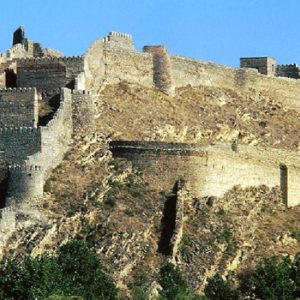 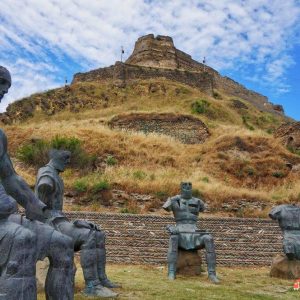 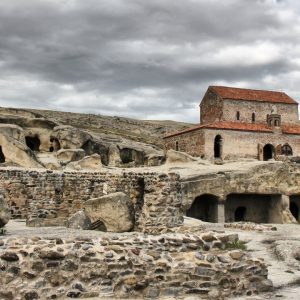 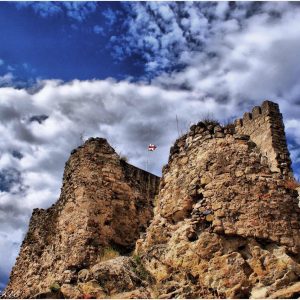 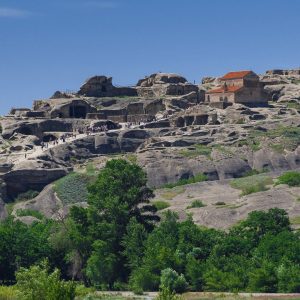 Filled with hidden valleys and secret treasures, Shida Kartli is Georgia’s heartland. Cultural monuments abound with an ancient cave city, diverse archeological sites and numerous churches, monasteries and fortresses. For travelers seeking adventure, the region offers many unforgettable opportunities, with magnificent gorges and trekking trails that are some of the most scenic in Georgia.

THE HISTORY OF SHIDA KARTLI

Shida Kartli is a landlocked region in eastern Georgia country, which comprises the central part of the historical-geographic province of Shida Kartli. The region is bordered by Russia to the north and has Gori as its capital and largest city.

The oldest trace of human civilization in Shida Kartli was found between the rivers Lamiskana, Kavtura and Tedzami, where Paleolithic tools were discovered. The area was already inhabited in the Bronze Age (3rd millennium BC), during which the “Kura-Araxes” culture was formed. Archaeological findings also indicate the existence of an urban settlement from the period of Classical Antiquity.

When King Parnavaz I of Iberia (331—234 BC) extended his authority over the whole of Kartli, Egris was merged with Shida Kartli and converted into one administrative unit ruled by an army chief.

In the 1st century BC, Roman commander Pompeius conquered Kartli, and for the next 300 years, the Iberian kingdom was further strengthened. In the 330s, Christianity was declared the official state religion in Kartli, which helped establish feudal relations.

During the 4th century, Shida Kartli, known then as Zena Village, was divided into 8 gorges. In the 5th century, the region was unified by Georgian King Vakhtang Gorgasali. In the 7th century, Georgia was conquered by the Arabs and most of the burden of Arab domination fell on the inner regions of Kartli.

By the time of King David the Builder (1089-1125), Shida Kartli was the economic and cultural center of the Georgian monarchy. Various aspects of cultural life were developed in the region, including secular Georgian literature, philosophy, painting, calligraphy, stamping, carpentry and stone-carving.

During the Middle Ages, Shida Kartli enjoyed strategic importance due to its location on the main highway connecting eastern and western Georgia. In the 13th – 14th centuries, the region prevailed through conflict with Mongol invaders. In the 1460s, following the collapse of the unified Georgian kingdom, it faced invasions by the Ottomans and the Persians.

In the early 17th century, after the Ottoman conquest of Samtskhe-Saatabago, Upper Kartli – the northwestern part of Shida Kartli, was separated from the Kingdom of Kartli. In the mid-18th century, the region was returned to Georgian control. Later, it came under the Tsar’s control after Georgia was annexed by Imperial Russia in 1801.

During Soviet rule, Shida Kartli was made a province within the Dusheti region and named Gori. The region suffered economic collapse and mass migrations during the post-Soviet crisis that followed Georgia’s independence in 1991.

Since 1992, the northern part of the region, namely Java, along with the northern territories of Kareli and Gori municipalities have been controlled by the self-proclaimed Republic of South Ossetia. Following the Russo-Georgian War of 2008, these northern areas have been occupied by Russian troops.

PLACES TO VISIT IN SHIDA KARTLI

Spread out across both sides of the Mtkvari River valley, Shida Kartli rests on the foothills of the Greater Caucasus and the forested Trialeti Range. The region is divided into the 5 districts of Gori, Kareli, Kaspi, Khashuri and Java, and one self-governing city, Gori, all of which offer an array of places to travel.

One of Georgia’s oldest urban settlements, Uplistsikhe is an ancient Georgian cave town-fortress. Its central section is the most interesting part, which comprises a big hall decorated with a rock-hewn ceiling, and the palace complex. Other highlights include a 6th century rock-carved church, a 10th century brick church, an amphitheater, pharmacy, bakery, prison and pagan shrines.

Dating from the 7th century, Ateni Sioni Church is an ancient domed church nestled within a beautiful setting overlooking the gorgeous Tana Valley grapevines. The walls of the impressive church feature inscriptions made using the early Georgian alphabet during the 9th to 11th centuries. The facades feature attractive carvings, while the interiors boast fine 11th century frescoes.

Ateni Sioni is situated in the Ateni Gorge which boasts an amazing diversity of flora and fauna. On a clear day, visitors can enjoy breathtaking views of the Caucasus Mountains from the church. A nearby resort offers special therapeutic baths in sulfur mineral waters believed to treat various illnesses.

Samtavisi Cathedral is a monastic complex that consists of a church, dwellings and a cemetery. Founded in the 6th century, the cross-domed cathedral is remarkable for the beauty of its proportions and beautiful carvings on its facades. The interiors feature fragments of frescoes dating from the 17th century.

The Joseph Stalin Museum complex consists of the memorial house in which Stalin was born, an exposition building and his personal armored train carriage. The museum exposition building is a huge impressive palace built in the Gothic style. It was established in 1957 and has over 60,000 displays documenting Stalin’s life and career, including documents, letters, photos and personal memorabilia.

Gori Fortress is a citadel that stands on a rocky hill in the middle of the town. Partially rebuilt, the fortress dates mostly from the Middle Ages, with 17th century additions. It once controlled key economic and strategic routes and accommodated a big garrison. The best time to visit the fortification is at sunset when you can enjoy picturesque vistas over the city.

Regarded as the founder of scientific pedagogy in Georgia, Iakob Gogebashvili was a famous public figure, teacher, scholar and writer. Established in 1958, his house-museum displays Gogebashvili’s memorabilia and personal belongings including first edition copies of his books, works by famous Georgian painter Elene Akhvlediani, and photos and documents from that period.

Built in the 12th – 13th centuries, the Kintsvisi Monastery complex comprises several buildings, with St. Nicolas Church as the main one. This 13th century cross-domed church boasts some of the finest examples of medieval mural art of that period, depicting Kings George II, Lasha-Giorgi, and Queen Tamar.

Urbnisi is an ancient town that was of great importance in medieval Georgian times. Surrounded by a thick wall, the town contained more than 18 towers. During the 5th – 6th centuries, the largest three-nave basilica known as Saint Stephen’s was constructed. It was first restored by Bishop Theodore in 9th – 10th centuries and later by Queen Mariam in 17th century.

Located in Ruisi village, Ruisi Cathedral of Transfiguration was constructed by King Vakhtang Gorgasali between the 8th and 9th centuries. The church has a three-storey bell-tower built in the 17th century. There are also ruins of a fortress surrounding the cathedral, as well as a wall built in the medieval period. Several ornaments dating back to the 10th and 11th centuries can be seen on the façades.

Dvani is a large grave site nestled on a mountain slope on the banks of River Proni. Fourteen graves dating back to the 6th and 7th centuries BC have been discovered here, some covered with cobblestones. Later archaeological excavations uncovered high quality black and red-burnt earthenware, silver, and bronze artifacts.

Khizaant Gora is an archaeological monument located on the left bank of the Mtkvari River in Urbnisi Village. Excavations have uncovered 12 antique cultural strata, including a Bronze Age grave site and 19 residences dating from the 3rd-1st centuries BC. Typical square houses of the Kura Araxes culture have also been found in the grave site. There are also ruins of a 6th century fortress, its tower and walls.

Located in Tsinarekhi Village, Kvatakhevi is a medieval orthodox monastery built in the 12th – 13th centuries. The complex consists of the main church, a bell-tower and monk cells. Once the country’s literary and educational center, visitors can see some preserved manuscripts from the library. During autumn, the natural landscape surrounding the monastery is especially breathtaking.

Built in the 7th century, the Rkoni Monastery complex features several layers: the 7th century Church of the Virgin Mary; the 13th century gate; a chapel, a church of John the Baptist, and a bell-tower dating from the 17th – 18th centuries; and dwellings for monks.

Near the monastery is King Tamar Bridge which is built over the Tedzami River. Visitors can cross the bridge and climb up the hill to see another small church and rock-hewn cave that was once used by monks. In autumn, the surrounding area is particularly stunning.

Tourists can also visit the Rkoni Fortress nearby which dates from the 18th century. Surrounded by battlements, the fortress is built on a mountain and comprises a church, a tower, and the ruins of a three-storey palace. The fortress was once the residence of Georgian feudal lords.

Nestled on a high mountain slope, Skhvilo Church was first mentioned in 10th century Georgian chronicles. The complex comprises the church, the main tower, a wall, water reservoir, as well as residential and functional buildings. The church has been invaded several times and was significantly damaged during the 17th century.

Located in a Tsromi village, Tsromi Cathedral was prominent during the 4th century. The present-day church was built by Stepanoz II from 626 to 634, but has since been destroyed and restored several times. In 1940, the cathedral was damaged by a devastating earthquake.

Surami Fortress is located on the southern slopes of the Likhi range, overlooking Surami town. The fortress once commanded a strategic position thanks to its proximity to the Surami Pass which connects eastern and western Georgia. While the exact date of its construction is unknown, the town itself has existed since the 12th century. Near the fortress are 9 churches and one synagogue.

Nestled on the southern slopes of the Likhi range, Surami Mountain Resort has been in operation since 1928. In addition to its healthy climate, the resort boasts natural mineral springs believed to help in the treatment of respiratory diseases.

The Khtsisi – St. John the Baptist Cathedral is located deep in the Khashuri forest. According to an inscription found on the church’s eastern façade, it was built in 1002 by Bishop Anania. It still functions as a monastery to this day.

Shida Kartli weather is generally characterized by a dry, continental climate, with the exception of the high altitude areas where it is humid. There are warm summers, cold winters and the mountain peaks are covered with snow year-round. The best time to visit Shida Kartli is from May to October when the weather is pleasantly warm for sightseeing.

HOW TO GET TO SHIDA KARTLI

For Georgia flights landing in Tbilisi airport, you may rent a car and drive to Shida Kartli. That said, driving in country Georgia can be challenging if you don’t understand the Georgian alphabet or speak the Georgian language. The best option is to travel to Shida Kartli via private transfer.

Shida Kartli is a region rich in ancient temples and monasteries, hidden in deep valleys and lush forests. Alpine meadows and mountain slopes are adorned with thousands of beautiful flowers, while pristine lakes and waterfalls await discovery by lovers of hiking and natural tranquility. Once you get a taste of the treasures of Shida Kartli, one visit simply won’t be enough.

Be sure to book Shida Kartli hotels and vacation rentals ahead through our travel planner. If you would rather drive, we have a modern fleet of Shida Kartli rental cars available for hire. We can also arrange travel to Georgia and Shida Kartli that includes private transfers to and from Tbilisi airport.

Alternatively, create your own custom vacation package that includes the specific places you’d like to see and things you’d like to do in Shida Kartli. Craving a fantastic getaway? Order your custom tour to Shida Kartli today and immerse yourself into the glorious Georgian heartland! 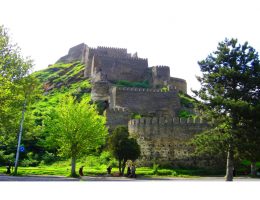 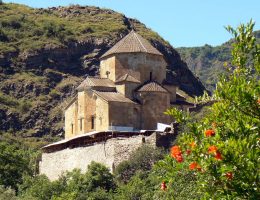 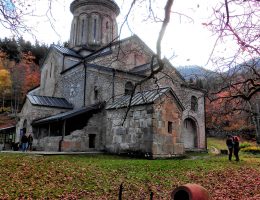 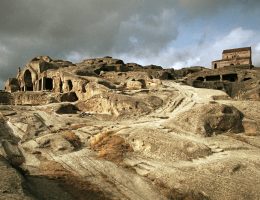