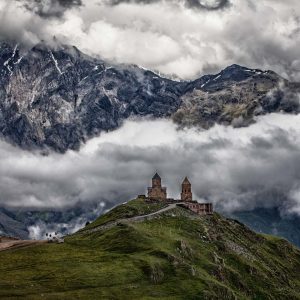 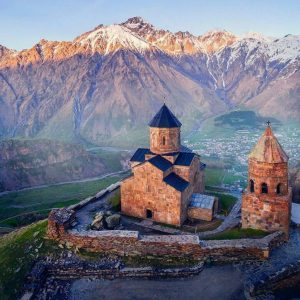 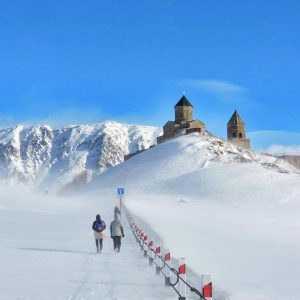 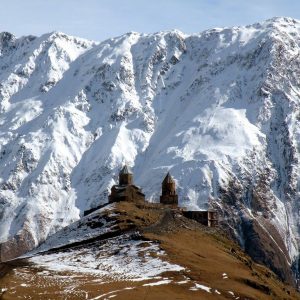 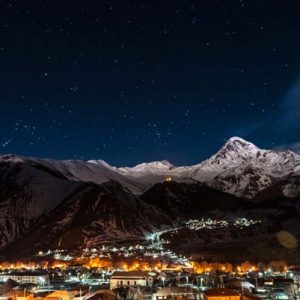 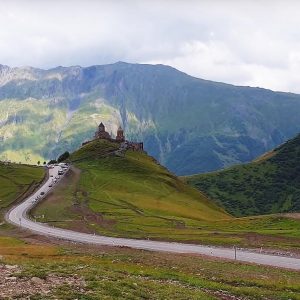 The most famous picture of the country of Georgia is the view of Gergeti Trinity Church, seen from Kazbegi village. Each year, thousands of tourists travel all the way up into the majestic Kazbegi Mountains just to lay their eyes on this breathtaking sight.

THE HISTORY OF GERGETI TRINITY CHURCH

Gergeti Trinity Church is the popular name for the Gergeti Tsminda Sameba, a church located near Gergeti Village in the Mtskheta-Mtianeti region of north-east Georgia.

The 14th century church is nestled on the right bank of the Chkheri River (the left tributary of the Tergi River), at an elevation of 2,170m above sea level. Its location lies on the craggy slopes of the Great Caucasus Mountain Range, within Kazbegi Municipality.

Although not much is known of its history, there are interesting anecdotes relating to the construction of Gergeti Trinity Church during the 14th century.

According to local folklore, when the people couldn’t decide on where to construct a church in the region, a wise man from Mtskheta told them: “Slaughter a cow and cut it into pieces. A raven will pick one up and fly away. It will then drop the meat and that is the place upon which you should build the church.” And so they built it there.

And when they had to choose an architect to build the church, they organized competition as follows: the first person who arrived at the site from Jvari Pass (the highest point on the Georgian Military Highway) would be the architect. Many began to run from Jvari Pass, including a lame man who rode a horse and took a shortcut. He won and built the church.

The earliest recorded history of the church is by Georgian author Vakhushti Batonishvili who wrote in the 18th century that when faced with danger from Persian invasions, important artifacts from Mtskheta, such as Saint Nino’s Cross, were brought to the Gergeti Trinity Church for safekeeping. A guide book from 1906 also mentions that the church was built on a former site for pagan idol worship.

In Soviet times, religious services in Gergeti Trinity Church were prohibited, although it remained popular as a stopover for travelers on the Georgia Military Highway. Following Georgia’s independence, the church was handed back to the Georgian Orthodox and Apostolic Church and resumed its functions as a church.

Ranked as one of the world’s most beautiful churches, Gergeti Trinity Church is today the top-visited tourist attraction in Georgia.

Gergeti Trinity Church is a monastic complex that comprises of the Holy Trinity Cathedral, a separate bell-tower, and clergy houses. Dating back to the same period as the church, the bell-tower is decorated with some bas-reliefs. The monastery dates from the 15th century and is inhabited by a handful of monks.

Built during the 14th century, the Holy Trinity Cathedral is the only cross-cupola church in the historical Khevi province. The church is quite simple in terms of design with a classic Georgian architectural style. Massive blocks of stone are decorated in bas-reliefs and ordinary patterns, while the windows let in very little light, creating a mysterious twilight in the interiors that have some nice frescoes.

Gergeti Trinity Church boasts a photogenic setting at the foot of the snow-capped Mount Kazbegi, one of the highest and most beautiful peaks of the Caucasus. In the face of such breathtaking beauty, the church’s modest exterior becomes all the more stunning for its simplicity.

The church’s grounds offer many amazing vantage points of the Kazbegi Mountains. But to get the world-famous shot of Gergeti Trinity Church from a distance with the mountains in the background, you will need to climb another 10-15 minutes farther uphill towards Gergeti Glacier.

Taking photographs of the church interior is not permitted. Also, as with most other Georgian churches, women visiting Gergeti Trinity Church are required to cover their heads, as well as their lower body. Even if wearing trousers, you are required to wrap yourself with a cloth provided at the entrance of the church.

No visit to Georgia is complete without hiking up to the staggeringly beautiful Gergeti Trinity Church. The famous church can be seen from all over Kazbegi, so you will easily know the general direction in which to go.

The hike up to Gergeti Trinity Church can be accomplished within a few hours. It takes around 1.5 hours to go up, and slightly less to come down, which makes it easy to accomplish on a day trip from Tbilisi. That said, we recommend that you stay overnight in Kazbegi as there are many fun activities to do here.

The hike is an easy ascent up a serpentine road and through a thorny, pine forest. It is rather cool and quiet as you go up the mountain, but it gets windy once you reach the plateau. Suddenly you will see an incredible sight: a little church sitting isolated against a backdrop of imposing snow-capped mountains!

Hiking up to Gergeti Trinity Church is a must because the surroundings are absolutely stunning. Moreover, the only way to gain a true appreciation of the scale of the Kazbegi Mountains is by traveling on foot. Once you arrive at the church, you will be rewarded with epic panoramas that make the long, steep climb worthwhile.

A nature lover’s dream steeped in ancient history, Kazbegi is the perfect Georgian getaway. Beyond Gergeti Trinity Church, Kazbegi’s spectacular landscapes offer a scenic retreat away from the tourist crowds with plenty of Georgia tourist spots to explore.

Rather than stopping at Gergeti Trinity Church, experienced trekkers can hike farther to the spectacular Gergeti Glacier (also known as Ortsveri). The stunning landscape offers uninterrupted views of the Kazbegi Mountains from different perspectives. The roundtrip trek takes 8-9 hours, so head out early in the morning.

Nestled on the banks of the Terek River at an elevation of 1,740m above sea level, the small town of Stepantsminda is the main settlement in the historical Khevi province. Famous for its scenic location in the Greater Caucasus, Stepantsminda is a hub for mountain climbing and trekking.

Situated at 5,047m above sea level, Mount Kazbegi is a peak within the Great Caucasus range and Georgia’s third-highest mountain. Known locally as Mkinvartsveri or Mkinvari, the Kazbegi Mountains have been ranked among the 100 places where you have to travel at least once in your life.

While is possible to enjoy epic views of Mount Kazbegi from virtually anywhere in Stepantsminda, the most dazzling panoramas can be enjoyed from Gergeti Trinity Church.

For more adventure, join a mountain climbing tour up the Kazbegi Mountains, and enjoy scenic treks while reconnecting with nature. On your way up, you will spend the night near Gergeti Trinity Church to get acclimatized to the higher Georgian altitudinal zones.

Dariali Gorge stretches 11km from Stepantsminda to Georgia’s border with Russia. With tumbling streams and verdant slopes set against a background of towering valleys, the gorge is one of the most spectacular of its kind along the Tergi River.

Situated at the foot of Mount Kazbegi, the Dariali Gorge has steep cliff faces, medieval Georgian watchtowers, waterfalls and diverse wildlife. Immortalized in 19th century Russian poetry, the gorge is also regarded as one of the Caucasus’ most romantic spots.

A scenic drive from Kazbegi towards the Russian border reveals a different yet gorgeous landscape. On your way, stop at Gveleti Village and hike to the two Gveleti Waterfalls, in the surrounds of small streams and lush green grasslands.

The bigger waterfall is a pleasant spot, perfect for picnics. The best time to visit is in the late morning when the sun shines right into the gorge. You can also swim inside the Gveleti Lake nearby. During winter, the waterfall freezes over transforming it into a fun ice climbing destination.

Located 4km south of Kazbegi, Sno Valley stretches to the southeast of the Georgian Military Highway. One of the region’s prominent cultural hubs, centuries-old carpentry and stone masonry are still practiced and taught in Sno by master craftsmen.

Dating from the 16th century, the Sno Fortress is situated on the banks of the Snotskali River. Constructed atop a stony hilltop, the fortification is surrounded by a circular wall with a pyramidal tower in the middle. There is also a small church in Sno.

Travel to the remote Juta Village and be completely immersed into the wild natural beauty of the Kazbegi landscape. Situated at an elevation of 2,150m above sea level, Juta is found within the gorgeous, velvety-green Sno Valley.

Trekkers can enjoy pleasant hikes in the Artkhmo Gorge nearby. Another trek from Juta goes southeast up Chaukhi Valley to the base of Mount Chaukhi (3,842m), a dramatic multi-pinnacled peak. You can also climb farther up the valley eastwards towards Chaukhi Pass (3,338m).

Truso boasts abundant historic and cultural sites such as the small abandoned Abano Village that has a few houses with ancient Georgian towers. Covered in birch forests, the gorge offers many trekking opportunities in the valleys of Mna and Suatisi.

The most beautiful of the Georgia ski resorts, the Gudauri Ski Resort is your best bet for fantastic skiing and snowboarding in Georgia. It’s also a top paragliding destination, offering visitors the chance to soar like a bird over stunning Georgian landscapes.

Situated 4km north of Gudauri, the Soviet-Georgian Friendship Monument is also known as the Gudauri View Point. Built in 1983 during the Soviet times, the Georgian monument is worth a visit to see its gorgeous tiled murals and breathtaking valley views.

HOW TO GET TO GERGETI TRINITY CHURCH

For flights to Georgia landing at Tbilisi airport, you may hire a car and drive 3 hours to Kazbegi (149km). That said, driving in Georgia can be challenging if you don’t speak the Georgian language or understand the Georgian alphabet. The best option would be to travel to Gergeti Trinity Church via private transfer.

From its isolated location perched on the slopes of the majestic Kazbegi Mountains and surrounded by the vastness of Georgian nature, Gergeti Trinity Church is a classic metaphor of the smallness of man in the face of God. Once you ascend the mountain and rest your eyes upon the incredible sight, you will truly appreciate why the church is the iconic symbol of the Caucasus.

You can book Kazbegi hotels in advance with our Georgia trip planner. For those who prefer not to hike up to Gergeti Trinity Church, we have a modern fleet of rental cars available for hire. We also organize Georgia holidays that include private transfers to and from the church.

Even better, create your own custom vacation package that includes the specific places you want to see and things you want to do in Kazbegi. Want to see Georgia’s most famous church? Order your custom tour package to Gergeti Trinity Church today and be dazzled by the iconic symbol of the Caucasus! 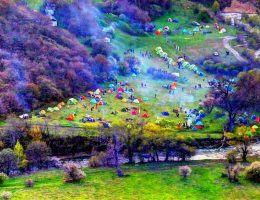 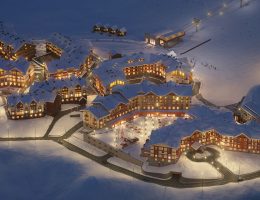 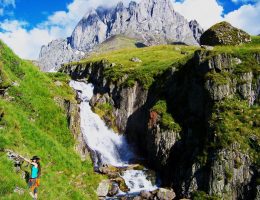