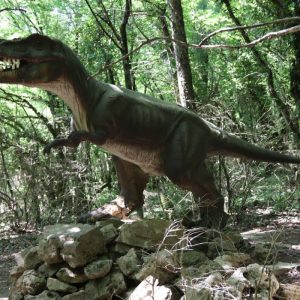 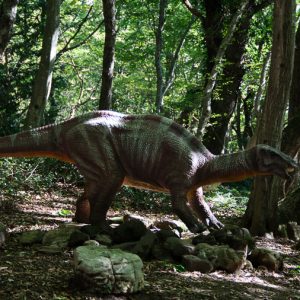 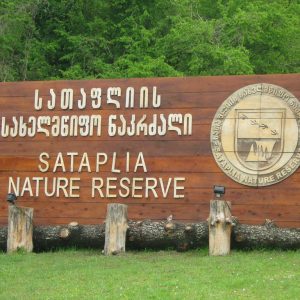 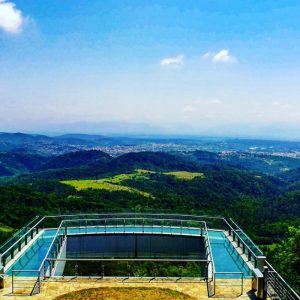 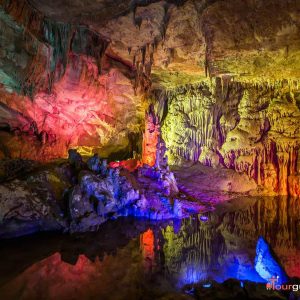 For millions of years, nature worked to create underground masterpieces in Georgia – and Sataplia Cave is one of them. Nestled among lush forest, this subterranean wonder ushers visitors into a world filled with spectacular geological formations, making you feel as if you’ve stepped right into nature’s own art gallery.

In addition to this labyrinth of mysterious karst caves, other treasures abound inside the Sataplia Nature Reserve. Visitors are also amazed by its well-preserved dinosaur footprints, and the glass-bottomed observation deck that offers breathtaking panoramas of the surrounding natural scenery.

THE HISTORY OF SATAPLIA NATURE RESERVE

Sataplia Strict Nature Reserve is situated within Tskaltubo district, in the Imereti region of western Georgia country. Its visitors’ center is situated in Kvemo Alvani Village within Akhmeta district, nestled on the slopes of an extinct volcano known as Mount Sataplia (494m) and Mount Tsinara (520m).

In Georgian language, “tapli” means “honey”, and the name “Sataplia” translates to “place of honey.” This derives from the local tradition of harvesting honey from wild bee colonies that used to inhabit the caves found on the southern slopes of Mount Sataplia.

Sataplia Strict Nature Reserve was established in 1935 to protect the area’s geological, paleontological, speleological and botanical Georgian monuments. These include karst caves with unique stalactites and stalagmites, Colchis forest ecosystems and archaeological sites. In 1957, the nature reserve was expanded to its present-day borders.

For several decades, the Sataplia Strict Nature Reserve didn’t receive much tourism investment as it was regarded mainly as an excursion destination for Kutaisi residents, rather than being of any scientific value. Later, the Regional Union of Scientists established an eco-school here to teach environmental awareness to pupils in the city’s elementary schools.

From 2010-11, a plush new tourist complex was set up in the nature reserve to attract international tourists. A visitors’ center was built, a café was opened, along with an exhibition hall and a pavilion displaying models of dinosaurs. A glass-bottomed observation deck was also built above the cliff-side, and the main karst cave was fitted with sound and lighting effects, as well as a secure footpath.

Today, the Sataplia Strict Nature Reserve is one of the popular places to visit in Georgia, offering a wonderful array of tourist activities to enjoy.

Spanning an area of 354 ha, the landscape of Sataplia Nature Reserve is mostly mountainous. Out of this total area, 348 ha (about 98%) is covered with dense Colchis forest – a type of temperate broadleaf and mixed forest with many shrubs and undergrowth. The nature reserve’s unique ecosystem is a thriving habitat for a broad spectrum of flora and fauna, including rare and endangered species.

Sataplia Nature Reserve has a beautiful karst cave complex that comprises 5 caverns filled with fascinating stalactites and stalagmites. However, only the largest cave – commonly known as “Sataplia Cave”, is open to visitors. Sataplia Cave is 900m long and up to 10m high and 12m wide. However, only a section of this large cave measuring 314m is available for tours.

Sataplia Cave was discovered by chance in 1925 by Petre Chabukiani, a teacher and researcher from Kutaisi. Chabukiani was traveling upstream when he noticed a crevice leading into the cave. Upon further exploration, he realized that the cave was part of a bigger complex that was naturally carved deeper out of the mountain rock.

An early human settlement was also discovered near a karst cave within the nature reserve. Archaeological excavations on the site unearthed a wide range of prehistoric Georgian stone weapons and other Georgian artifacts that are currently on display at the Kutaisi Ethnographical Museum.

Visitors have the option of walking around at their own pace or joining a group tour, with services offered in English, Georgian and Russian. The guided Sataplia caving tour covers 2km, and takes about one hour to walk along the main visitor trail.

Sataplia Cave is a karst cave with a small underground river. The cave comprises three halls with many stalactites (formations hanging down from the ceiling) and stalagmites (formations growing up from the floor), carved out over a period of two thousand years.

Sataplia Cave is part of a large cave system unified by an underground river. The cave features several distinct rock layers formed over millions of years during different stages of the Earth’s development. To date, only a fraction of the entire length of the cave system has been explored.

Sataplia Cave is equipped with great sound, colorful lights and visual effects that enhance the natural beauty of its rock formations. The impressive stalactites and stalagmites are dramatically lit, giving the cavernous space an eerie atmosphere. The trail within the cave is fitted with handrails for visitor safety.

The highlight of this cavern is its dome-shaped hall, which is located 100m from the entrance. The size and beauty of the stalactites and stalagmites found in the middle of this hall will astonish you.

At the center of the cave is a large 6ft tall stalagmite in the shape of a giant human heart, known as the “Stony Heart.” This was created over thousands of years by tiny drops of calcium in the water falling from stalactites on the ceiling above. Locals believe that if two people who are in love place their hands upon the Stony Heart, their feelings for each other will last forever.

However, if you don’t have a lover, you may still place your hands on the Stony Heart and wish for one and your wish will be granted. Such local beliefs are some of the reasons why Sataplia Cave has become a popular venue for Georgian weddings. For a small fee, engaged couples can have their civil marriage signing ceremony inside the cave.

Next to the Stony Heart is a hall that is popular among people suffering from bronchial asthma. With a permanent temperature of about 14 degrees Celsius, the cave is said to have healing air ideal for treating respiratory diseases.

The cave is a habitat for a wide variety of nocturnal organisms including bats, freshwater mollusks and crayfish. However, the mountain-dwelling bees that produced plentiful honey, giving the mountain its name are today few in number.

Running through the cave, the underground river exits into a well. Thereafter, it flows along narrow impassable bends before finding its way out on the southern slopes of Samgurali Hill, within the Oghaskura Cave on Mount Sataplia.

The star attraction of the Sataplia Nature Reserve is the collection of about 200 fossilized dinosaur footprints preserved in Cretaceous limestone, dating from the Mesozoic Era, about 120 million years ago. Remarkably well-preserved, the footprints are displayed inside the Conservation Center building.

Sataplia’s dinosaurs are called “Satapliazaurus” and are different from European dinosaurs. Built above the footprints is a pavilion with a display of skeletons of Satapliazaurus dinosaurs. The pavilion is equipped with buttons that visitors can press to hear the sound of a specific dinosaur roaring!

Sataplia Nature Reserve has several panoramic vantage points. Visitors can enjoy a walk on the cliff-side, which offers stunning views of Kutaisi. Also located at the highest point of the nature reserve is an Observation Deck that offers sweeping views of the surrounding natural scenery.

The spectacular Observation Deck is built on the rocky cliff-side in the form of a horseshoe, and has a glass-bottomed viewing platform that opens up to breathtaking views of Kutaisi and its surroundings. Just be careful: standing on the transparent glass floor can make you feel as if you were hovering over an abyss! To protect the glass floor from scratches, visitors are provided with special shoe covers.

To reach the viewing platform, you’ll get to walk along scenic trails that wind through lush Colchis forest. The Observation Deck is located 500m to the left of a 300m loop that is situated to the right of the Colchis Forest Trail.

The leafy forest canopy bathes the footpath leading to the cave in a mellow, green light. Standing along the path are statues of well-known dinosaurs. Tyrannosaurus Rex and Iguanodon are just two of the extinct creatures represented here that are certain to excite visitors. While the replicas can be a bit scary with their claws sticking out, it is a great opportunity to take your very own dinosaur selfie!

There is also an exhibition hall with good displays on the Sataplia Nature Reserve. Here visitors can learn interesting facts about local wildlife and more information about the dinosaurs that once roamed this part of Georgia. Also on display are pictures of archaeological excavations that were carried out in the area, and their findings.

Outside the cave is a trendy café with a double terrace, where you can stop to rest and grab a bite to eat. There is also a children’s play area, and a souvenir shop within the nature reserve. (For a wider variety of Georgian souvenirs, be sure to visit our Georgia souvenir shop).

The karst cave at Sataplia Nature Reserve is open to tourists the whole year-round. However, you will best enjoy your tour if the weather is warm and dry. It is therefore recommended that you plan your trip in summer or early autumn. For safety reasons, walking on the Observation Deck is not allowed in rainy and snowy weather. The reserve is open every day from 10am to 5pm, except Mondays.

HOW TO GET TO SATAPLIA NATURE RESERVE

There is no place in the world quite like Sataplia Nature Reserve, where visitors get to step into the fossilized footprints of both carnivorous and herbivorous dinosaurs. And then there’s the enchanting Sataplia Cave that adds to the other-worldly experience with its spectacular array of stalactites and stalagmites. Top it all off with some of the best panoramic vistas in Georgia, and you are guaranteed an unforgettable experience at the Sataplia Nature Reserve.

You can book Kutaisi hotels and vacation rentals in advance with our Georgia country tourism service. If you prefer to drive yourself, we have a modern fleet of Kutaisi rental cars available for hire. We also organize Georgia tours from Sataplia Nature Reserve with private transfers to and from Kutaisi airport.

Even better, create your own custom vacation package that includes the places you want to see and things you want to do in Kutaisi. Fancy a peek at dinosaur footprints? Order your custom tour to Sataplia Nature Reserve today and walk in the footsteps of prehistoric dinosaurs! 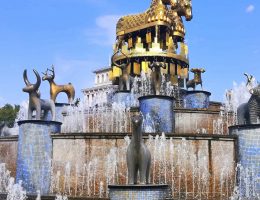 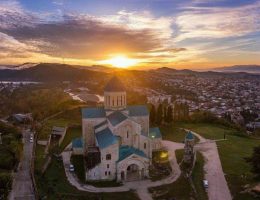 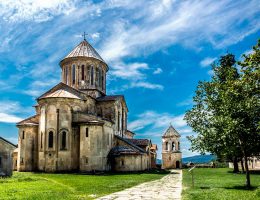 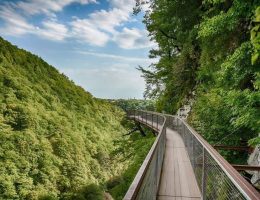 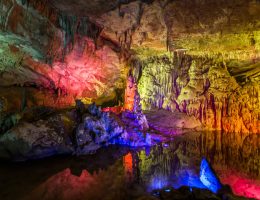 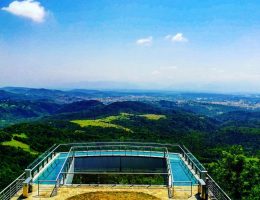