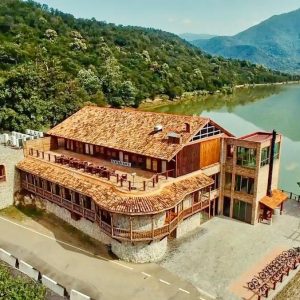 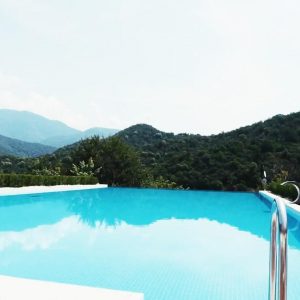 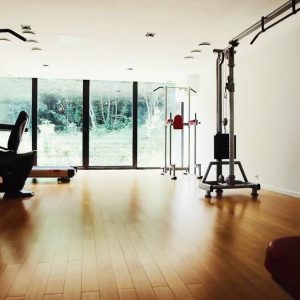 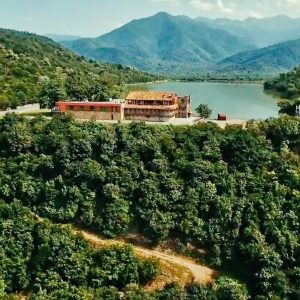 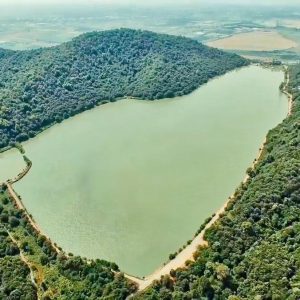 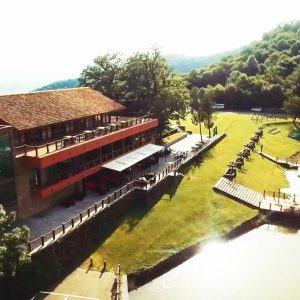 Small and lovely, Kvareli is both an interesting place for a daytrip and the perfect starting point for a longer tour around Georgia’s premier wine region – Kakheti. From foodies and wine lovers to nature enthusiasts and history buffs – there’s something for everyone in Kvareli.

PLACES TO VISIT IN KVARELI

Kvareli is a town located in Alazani Valley within the Kakheti region of eastern Georgia. It is one of the most beautiful cities in Kakheti, thanks to its breathtaking Georgian nature and magnificent views of the Greater Caucasus Mountains. Biking in Kvareli is a great way to enjoy the stunning natural scenery, rolling vineyards, picturesque villages and historic sites, among other amazing tourist places.

Located on the Great Silk Road, Gremi city was the capital of the vanished Georgian Kingdom of Kacheti. The city was destroyed in the 16th century by the Persians and has never been restored since. Today, the ruins of Gremi city are an important archaeological site of the Late Medieval period, featuring the remains of churches, baths, dwellings and trading arcades.

The Gremi Church was constructed and painted with frescoes in 1565 on the order of King Leon. Its unique style features new attachments to the traditional structure of the Georgian cross-cupola church. The façades are good examples of the brick church decorative system that is characteristic of Georgia’s late feudal era.

Erected next to the Church of Archangels is the 3-storey Royal Tower whose two bottom floors were built before the church itself. On the ground floor is a tall, large room. Along the back wall of this room is a corridor leading to the first and second floors. There is a belfry at the top of the tower.

Situated near Shilda Village, Nekresi Monastery is a Georgian Orthodox monastic complex that consists of a basilica, mortuary chapel, bishop’s palace, refectory and defensive tower. Perched on the wooded eastern slopes of the Greater Caucasus Mountains, the Georgian monument is famous for its impressive views over Alazani Valley.

The monastery is located in the ancient Georgian town of Nekresi which was established between the 2nd and 1st centuries BC by King Pharnajom. In the 4th century AD, a church was built in Nekresi during the reign of King Mirian, Georgia’s first Christian king.

This 4th century church would become a refuge for Father Abibos in the late 6th century. Abibos was one of the Thirteen Assyrian Fathers who came to Georgia to spread Christianity. He later became the bishop of Kakheti and founded a monastery at Nekresi, which became his residence.

In addition to spreading Christianity, the monastery was an important educational and scientific center of the region, where monks studied theology, and wrote and copied manuscripts. For a long time, Nekresi Monastery exercised great political and cultural influence over the Eastern Caucasus region. Because of this, the monastery often became the target of enemy attacks.

Today, the monastic complex of Nekresi unites several Georgian architectural monuments, among which are 3 churches. The first is a 3-church basilica dating from the 8th and 9th centuries. The basilica features a plan that is unique to early Georgian churches, with solid walls used to divide its 3 naves into three different churches.

Dating from the second half of the 4th century, the oldest church (also one of Georgia’s oldest) stands at the center of the complex. The small basilica has open arches in the facade to conduct service from outside, as well as an ancient tomb with human bones.

Beside it stands the two-storeyed 9th century bishop’s palace, complete with an impressive grand hall, a wine cellar and a 16th century tower. To the east is the main Church of the Assumption of the Virgin, another 3-church stone basilica built in the 6th and 7th centuries, with interiors decorated in murals painted in the 17th century.

Affectionately known as “the father of the nation,” Prince Ilia Chavchavadze (1837 – 1907) was a Georgian poet, writer, publisher and political figure who led the renaissance of Georgia’s national movement during the second half of the 19th century, when the country was under Russian rule.

Established in 1937, the museum complex consists of Chavchavadze’s modest home, his family’s castle and an exhibition hall. There is also a picturesque garden with grape alleys, decorative plants and century-old walnut trees, and a square stone tower.

The museum showcases memorabilia of the poet and his family, including his manuscripts, family coat of arms, seal, household items, 18th and 19th century weapons, furniture, a collection of Chavchavadze’s works, paintings inspired by his works, and a collection of photographs and archival documents.

Wine is the blood of the Georgia country and Kakheti is its most important vessel. Situated at the heart of Kakheti’s wine region, Kvareli is home to Georgia’s largest winery – Winery Khareba. The winery boasts one of the largest wine cellars in the world – an underground tunnel that maintains the perfect temperature for Kakheti’s famous white wine, Kindzmarauli.

Winery Khareba features a winery and tasting rooms situated inside its Gvirabi tunnel, an old tunnel built in Soviet times. Visitors can enjoy a unique tour inside the winery’s mysterious 8km long tunnel that was opened in 1962 for the World Congress of Vine and Wine.

During the tour, you can learn more about wine and wine-making, admire views of Kakheti from the tower and decide which method of wine production you prefer: European or Georgian.

At the end of the tour, you can enjoy tastings of Georgian wine and other interesting activities such as learning how to make puri (Georgian bread) and churchkhela (Georgian candy). You can also taste chacha (Georgian brandy) and enjoy a delicious meal of Georgian cuisine in their restaurant with beautiful views over the waterfall and magical garden.

Spread out over 300 hectares of natural landscape, beneath the southern slope of Greater Caucasus Mountains, lies the beautiful Kvareli Lake Resort. Built around the stunning Kvareli Lake, the resort is one of the best places in Kakheti to relax in nature.

Surrounded by virgin forest, with Kvareli Lake at the front into which the small Bursa and Chagurgula rivers flow, and with the sprawling Alazani valley in the background, Kvareli Lake Resort is a unique place to stay. Visitors can sleep in large hotel rooms, each equipped with a small terrace that provides beautiful panoramas.

One of the magnificent lakes of Kvareli, Ilia Lake is an artificial man-made lake. It is located in the Alazani Valley, where vineyards of Saperavi grape used in the production of Kindzmarauli wine are located. An architectural masterpiece, the lake is nestled within the Duruji River Gorge and is surrounded by broad-leafed forests, with the Greater Caucasus Mountains in the background.

Ilia Lake was named in honor of Ilia Chavchavadze, the famous 19th century writer of Georgian literature. This lake is very popular, especially during summertime. Visitors can rest in the beautiful park, cafes and restaurants, while enjoying views of the forest-covered mountains.

From the well-equipped recreation area, you can rent a bike and cycle around the lake, among the trees, enjoying the fresh air. Or you can sit and enjoy magical views of the lake with its reflections of the beautiful hotel that looks like a fairy-tale castle. You can also swim or rent a catamaran or paddle boat and sail in the lake.Top of Form

The Marjanishvili Memorial Museum is located inside the former house of Konstantine “Kote” Marjanishvili (1872 – 1933), one of Georgia’s most famous theater directors. Also known as Konstantin Aleksandrovich Mardzhanov in Russian, Marjanishvili is famous for his big, lavish theater shows.

Marjanishvili is regarded as an important contributor to the pre- and post-revolutionary evolution of Russian, Soviet and Georgian stages.

The Marjanishvili Memorial Museum showcases Marjanishvili’s memorabilia, including his personal belongings, audio and video recordings of his plays, and pieces of graphic art, among others. The museum is also famous for hosting “Makeup Anointment”, an annual induction ceremony for students of the Tbilisi-based Shota Rustaveli Theatre and Film University.

One of the biggest Kakhetian strongholds of the 16th – 18th centuries, Kvareli Fortress was of strategic importance as a defensive structure for both Kakheti and Georgia’s inner regions against the Lezghin invasions of the 18th century.

Nestled on a plain directly on the central square in Kvareli, the fortress has a large square layout. Its corners are formed by cylindrical towers, with the main entrance located in one of them. The main wall is further divided into smaller towers.

The entire fortress structure has 3 floors, with enclosures and facilities designed to accommodate a garrison strong enough to resist a siege by an army of 25,000. As with other Georgian fortresses, decorations are scarce inside Kvareli Fortress. That said, the entrances are adorned with diamond-shaped bricks and crosses.

Rising to a height of more than 3 meters, the fortress walls were built using gray stone. Originally, the citadel was enclosed by another wall, located about 20 meters outside the fortress. It was also previously surrounded by a moat. Today, a football pitch is located inside the walls of the ancient fortress.

THE BEST TIME TO VISIT KVARELI

Many tourists are drawn to Georgia for its nature and cuisine. However, to truly experience Georgian culture and its fascinating traditions, you must attend some of the country’s amazing festivals. September is the best time to visit Kvareli as travelers can participate in Rtveli, the annual grape harvest festival. Kvareli weather is also pleasant at this time of year.

WHERE TO STAY IN KVARELI

In terms of accommodation, visitors can choose from a wide range of Kvareli hotels and vacation rentals. Wine lovers may opt to stay on a vineyard, many of which offer everything from basic guesthouses to all-inclusive luxury lodgings.

WHERE TO EAT IN KVARELI

Traditional Georgian food paired with fine Georgian wine, are the hallmarks of the beautiful Kakheti region. Food lovers are guaranteed superb meals, be it at a winery, a guesthouse or one of the amazing Kvareli restaurants.

HOW TO GET TO KVARELI

For flights to Georgia landing at Tbilisi airport, you can hire a car and drive 1.5 hours to Kvareli (130km). That said, driving in Georgia can be challenging if you don’t speak the Georgian language or understand the Georgian alphabet. The best option would be to get to Kvareli via private transfer.

Kvareli is a charming town of rolling vineyards, inviting wineries, rich history, beautiful monuments, great hospitality and, of course, delicious wine. Whether you’re planning a week-long adventure or a whirlwind wine tour, Kvareli makes for a worthwhile stopover on your Georgia itinerary.

You can book Kvareli hotels ahead with our Georgia country tourism service. If you would like to drive around Kvareli, we have a modern fleet of rental cars in Kvareli available for hire. We also organize travel to Georgia and Kvareli with private transfers to and from Tbilisi airport.

Even better, create your own custom vacation package that includes the specific places you want to visit and things you want to do in Kvareli. In the mood for some fine wine and fantastic sightseeing? Order your Georgia custom tour to Kvareli today and enjoy a fantastic holiday at the birthplace of wine! 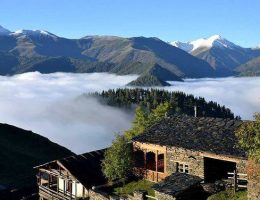 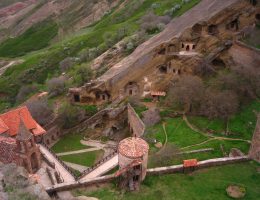 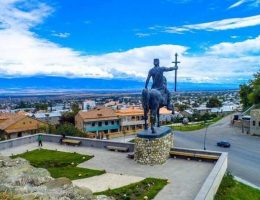 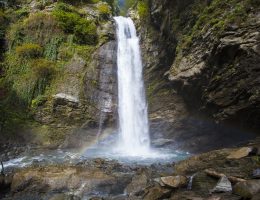 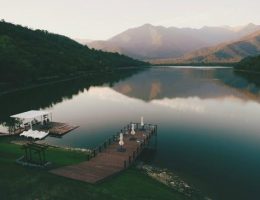 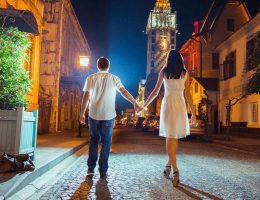 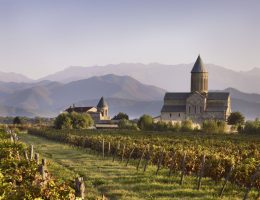 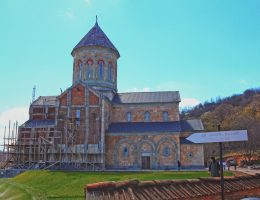 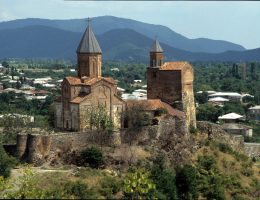 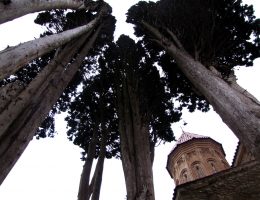