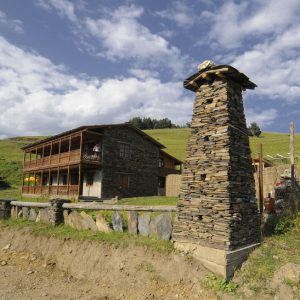 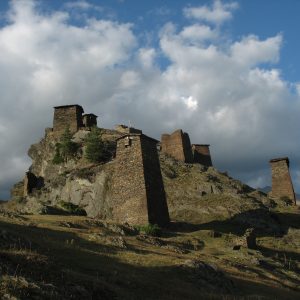 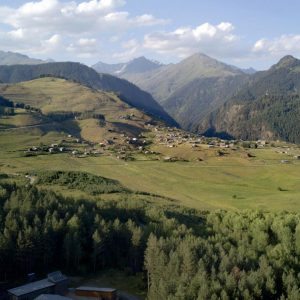 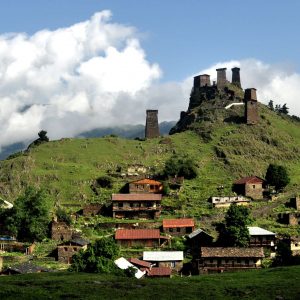 Built in harmony with the surrounding nature, Omalo is perched between the rocky peaks of the Caucasus range. From this vantage point, the village boasts panoramic views over some of the most impressive valleys in the South Caucasus, dominated by a stunning group of medieval watchtowers.

PLACES TO VISIT IN OMALO

Nestled between the Greater Caucasus Mountain Range and the Pirikita Range, Omalo is the largest and principal village of the historical province of Tusheti. Administratively, it is part of the Akhmeta municipality, within the Kakheti region of northeastern Georgia.

Omalo boasts an amazing natural landscape and unique cultural identity. In addition to its stunning medieval architecture, a variety of tourist places make the village a popular destination in country Georgia.

Because of its high-altitude location and the absence of good roads, Omalo is largely isolated from the rest of Georgia for most of the year. The only access road goes through the Abano Pass, which is normally closed between October and April due to thick snow cover, and is accessible only via 4WD.

Abano Pass is a high mountain pass situated in the middle section of the Greater Caucasus range that connects Tusheti and the rest of Kakheti. At an elevation of 2,850m above sea level, Abano Pass is the highest drivable mountain pass in the Caucasus.

The stunning 72km unpaved serpentine road also offers one of the most spectacular drives in the world. Along the way, visitors can soak up the breathtaking scenery of high, snow-covered peaks and steep, grassy hillsides with flocks of sheep and wild horses racing through iris fields. At various points, the almost vertical slope leads into gorges several hundred meters deep.

Keselo is a small medieval Georgian fortress that consists of five towers perched on a hilltop above Omalo. Keselo Fortress was constructed in the 1230s during the Mongolian invasion of Georgia and originally had thirteen towers known as keseloebi.

The fortress was intended as a refuge for the Tushetians who would use its towers as temporary shelters during raids on their village by invading Mongols, and later Dagestan tribes. The fortress towers are built using slate and are surrounded by windows.

By the 20th century, most of the fortress towers were in ruins. Restoration work began in 2003 using medieval Tushetian techniques for the construction of fortified towers.

Housed inside one of the towers of Keselo Fortress is the interesting Omalo Ethnographic Museum that displays Georgian artifacts of Tusheti’s ancient customs and beliefs through the ages, as well as the social structure of the society.

The museum showcases an array of archaeological artifacts such as ancient rock art motifs and Bronze Age jewelry and axes discovered during restorative work on Keselo Fortress. There are also traditional agricultural tools, household items and weapons that reflect how Tushetians lived in the old days.

The Shalva Alkhanaidze Photography Museum is located inside another tower in Keselo Fortress. The museum showcases a collection of local photographs taken between the 1950s and the 1970s.

Tusheti is remarkable for its picturesque landscapes of alpine meadows and coniferous forests. Beyond Omalo, the historic region boasts unique cultural heritage monuments in the form of ancient villages, among other amazing attractions.

Dartlo is a picturesque village situated within the Pirikita Alazani Valley some 12km northwest of Omalo. The village boasts ancient wood and slate houses, crowned by an impressive group of stone-built watchtowers that date from the 19th century.

Unlike other Tushetian villages whose houses have modern roofs, Dartlo boasts uniform architecture with stone-slated roofs that help preserve its historic, medieval image. This is what makes Dartlo worth the steep hike from Omalo, with some of the region’s most rewarding mountain views along the way.

In summer, the village is covered by wildflowers that line its narrow pebble streets, offering a stunning sight. A unique treasure of Georgian architecture, Dartlo is also famous for its open-air court hall whose main judge was a woman.

Situated 2km from Diklo Village, the Dzveli Diklo fortress is perched on a rock overlooking Russia’s Dagestan province. Hikers can enjoy a scenic 40 minute one-way hike from Diklo village with splendid views of the valleys. Diklo’s houses are built to trap warmth inside as long as possible during the day, as mornings and the evenings are usually quite chilly.

Located to the east of Omalo, on the southern slopes of the Greater Caucasus range, Shenako is one of the prettiest villages in Tusheti. Clustered under one of the region’s few churches, the village has stone-built slate houses with carved wooden balconies.

Nestled in the shadow of Mount Diklo, Shenako houses several buildings of Georgian folk architecture, as well as its medieval Church of the Holy Trinity. The village’s delicate architecture is impressive in its complexity. Shenako is one of the few populated villages in the Tushetian highlands, and is accessible only via 4WD.

Kvalvo Village is located on a hillside some 200m above Dartlo Village. Here you will find the interesting Kvalvo Tower, which towers over the village and once served as a refuge from Dagestan invaders. Visitors can climb up the ancient tower which overlooks the whole valley, and enjoy panoramic views of the surrounding rivers and mountains.

Located halfway between Omalo and Shenako lies the lonely “Castle of Love”, a tower associated with Georgia’s version of the tale of Romeo and Juliet. The castle offers picturesque views over the Alazani Valley and makes for an interesting walking tour from Omalo.

According to local legend, at the end of 18th century there lived a boy from Shenako and a girl from Diklo that loved each other. But both their families disapproved of their love and forbade it. After disobeying the warnings of their elders, the pair were both expelled from their villages.

Despite nobody being allowed to help them, the couple managed to build a tower on the poorly accessible crag over the Pirikita Alazani Valley. For food, they grew crops and hunted in the surrounding forests. In the beginning, they lacked fire. But later, the boy’s grandmother brought them fire. When she was discovered, the grandmother was also expelled from her village.

The couple continued to live in the tower and gave birth to four brave sons. Then, one summer, Dagestan invaders came, burned Shenako and Diklo to the ground, and killed all the men in both villages.

Only the four sons from the Castle of Love survived. They managed to defeat the invading army and returned to Shenako and Diklo, where they founded new lineages. Present-day villagers claim to be their descendants.

Spanning 796 square kilometers, Tusheti National park is one of the Caucasus’ most ecologically unspoiled regions. A vital habitat for many rare and native plant and animal species, the park is notable for the exceptional beauty of its alpine landscapes.

Tusheti National Park is famous for its rich biodiversity of birch forests and meadows, pastures and hayfields. Wildlife enthusiasts can spot mammals such as the Front-Asian panther, wolf, lynx, wild cat, roe deer and wild boar.

The park is also a great spot for birders to quietly observe birdlife in pristine Georgian nature. Visitors can hire binoculars and enjoy bird watching, as they spot rare species such as the black kite, the greater spotted eagle, Caucasian snowcock and Caucasian grouse.

The jewel of Tusheti, the park practically encompasses all the Tushetian villages and was created to preserve their spectacular sights of great historical and cultural significance. These include the unique Georgian monuments of cultural heritage such as the ancient watchtower-houses, indigenous customs, traditional crafts and local cuisine.

THINGS TO DO IN OMALO

Hidden among the picturesque valleys and mountain peaks of the Caucasus, Tusheti is one of the best Georgian destinations for long hikes and trekking. And Omalo is the ideal starting point for hiking and other fantastic outdoor tourist activities in Georgia.

One of the most unspoiled regions of the Caucasus, Tusheti is impresses hikers with its spectacular nature and ancient Georgian villages dominated by medieval watchtowers. Avid trekkers can enjoy both single day and multi-day hikes through Tusheti’s pristine historical centers.

One of the popular multi-day treks leads from Omalo across the Tusheti National Park to Shatili in Khevsureti province. On the way, you will pass medieval villages such as Dartlo, Dano, Chesho, Parsma and Girevi, the last village in the valley. The 75km long trail leads over the Atsunta Pass (3,487m) down to Khevsureti and on to Shatili. Depending on your fitness level, you should plan 5-8 days for the hike.

For day hikers, there is a beautiful 12km long hike from Omalo to Goglurta, which can be completed in a day. The trail leads from Omalo through Chachabo and the Apakurta Pass (2,551m) and finally on to Goglurta.

Visitors to Omalo can also enjoy off-road adventure jeep tours that go over the Tushetian valleys and provide picturesque views. Or go horse riding through the tiny mountain villages of Tusheti, past ruined ancient fortresses and herds of sheep.

THE BEST TIME TO VISIT OMALO

Because of severe climate, Omalo remains inaccessible for 7-8 months a year. Visitors should wait until the second half of May when the roads to Tusheti open. July through August is the peak season for trekking when Omalo weather becomes drier and more stable. This is also when Georgian nature is at its most beautiful, and everything is green and blooming with colorful wildflowers.

Or plan your visit to attend the colorful Tushetoba festival in summer and watch the region come alive with celebration. Tushetoba is held in Omalo every July or August to celebrate the unique cultural heritage of the Tusheti region.

Traditionally, the event kicks off with a horse race whose winner gets a sheep and a flag. For the sake of speed, horse riders have a maximum age limit of 15 years. Also on display are other Georgian sports such as archery and wrestling.

WHERE TO STAY IN OMALO

While Omalo has several guesthouses, these operate only when the road is open, with some not even opening until July. There are also a handful of nice Omalo hotels and vacation rentals that offer rooms with stunning panoramas of the valley.

WHERE TO EAT IN OMALO

A number of Omalo restaurants serve local Georgian food in the form of simple, hearty mountain fare. Diners can expect a lot of meat, cheese and khachapuri, with few vegetables. Most guesthouses in Omalo also offer half-board rooms with an option of a packed lunch.

HOW TO GET TO OMALO

For flights to Georgia landing at Tbilisi airport, you will need to hire a 4WD suitable for off-road use and drive 4.5 hours to Omalo. However, we recommend not only renting the car, but also a local, experienced driver with local knowledge of driving through the slippery Abano Pass.

The road to Omalo is an adventure in itself taking you through a serpentine mountain pass into a gorgeous valley. As you climb out from the verdant valley, medieval watchtowers appear in the distance, making for a truly magnificent sight. And once you arrive at Omalo, you realize that you have journeyed right into the heart of Georgia’s natural beauty.

If traveling in summer, it’s best to book Omalo hotels ahead with our travel service. If you prefer to drive, we have a modern fleet of 4WD rental cars in Omalo available for hire. We also arrange Georgia vacations in Omalo that include private transfers to and from Tbilisi airport.

You can even create your own custom vacation package that includes the places you want to see and things you want to do in Omalo. Up for a fantastic adventure? Order your custom tour to Omalo today and explore a beautiful Georgian village where time has stood still! 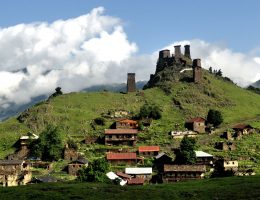