You don’t have to go far to find natural wonders in this beautiful country. Both natural and manmade, there are many great places to visit in Georgia. As well as its history and beautiful landmarks Georgia also has countless places of natural beauty. Here we look at the 11 most stunning that are a must-see for any lover of nature.

Tbilisi is one of the most beautiful cities in the world with a fortress, a magical old town, a large reservoir, and many pieces of incredible architecture. When you look beyond that, you will also see that the city sits in an area of outstanding beauty.

The capital is sandwiched between two small mountain ranges that you can always see from Tbilisi. One of the best ways to see the city is heading up the Funicular which is a railway that takes you to Mount Mtatsminda on the east of the city. It offers you stunning views of the city below and the surrounding area.

As well as being able to cast your eyes over the landscape there, you can also enjoy the Mtkvari river which snakes through the city and the many lakes it has such as Lisi and Turtle. While it’s a great bustling city if you travel of Tbilisi make sure you enjoy the natural beauty as well.

To the north of Georgia, there are the Caucasus Mountains which border Russia. They contain a few incredible mountains with the most famous being Mount Kazbegi. If you were feeling adventurous then you could decide to climb to the top where you are sure to see some natural wonders!

If climbing isn’t your thing then there are a few other great ways you’re going to be able to enjoy the mountain. Perhaps the best is to take in a man-made wonder while you’re at it with the Gergeti Trinity Church which is on a hillside but easily accessible.

You’ll be able to enjoy the church but more importantly, you will have a panoramic review of Mount Kazbegi and its surrounding peaks. It’s a truly breathtaking experience as you get to cast your eyes over the snow-capped peaks in front of you.

While Mount Kazbegi is far above your sea level, Georgia has caves far, far below it. One of the most fascinating facts about Georgia as it doesn’t just have the deepest cave in the world, it has the four deepest which are all in the Abkhazia region.

Krubera at 2,197 and the Veryovkina caves at 2,212 meters are the biggest and a wonder to be explored. Being in such a cave can bring its risks and it’s only suitable for serious divers. They are not for the faint-hearted with epic drops and tight passages.

There are parts of the caves still being discovered and it may yet reach to deeper depths than we already know. If you want to be as far below the Earth’s crust as possible then Georgia is the place that you want to be.

Sadly, the Georgian government currently does not control Abkhazia and the tourist safety in the area is not guaranteed. Both the European Union and the United States advise their citizens to refrain from visiting the region.

Waterfalls in any part of the world are beautiful and this one in Georgia is no different. It’s located in the very southwest of the country. If you’re visiting the city of Batumi then it’s only going to be a short drive away in a car rental.

At 52 meters in height, it’s an impressive sight with a walkway that takes you right to it. Georgia’s rough terrain gives you many opportunities to see impressive bits of nature and this waterfall is near the top of the list.

If you get the opportunity to see it then you must take it. There are restaurants, inns, and picnic sites that you’re going to be able to relax in. There is also a nearby medieval stone bridge if you wanted to see a beautiful man-made structure. 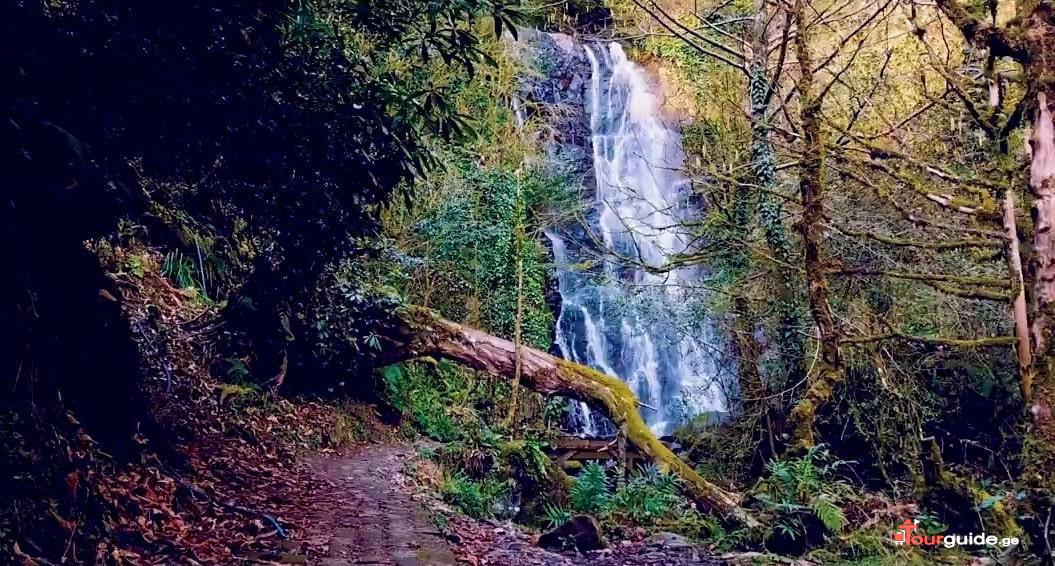 There can be quirks of nature that happen with the shifting of tectonic plates and such an example is the Katskhi Pillar. It rises vertically out of the landscape in a valley and dominates the environment and almost looks mythical.

You can get to the top of the pillar but it’s not for the faint-hearted. There are ladders all the way to the top but just make sure that you don’t look down. The bottom of the pillar has a negative tilt which even makes it more daunting.

If you do get to the top not only would you have climbed one of Georgia’s natural wonders but you’ll also be able to cast your eyes over the Imereti region and you’ll feel as though you’re in paradise. As with many parts of Georgia, the feeling can be magical.

In the Svaneti region of Georgia, there is a place called Ushguli which is a picturesque and charming village that looks as though it hasn’t changed in hundreds of years. There are old watchtowers and ancient brick buildings that make it a fascinating place to visit.

What helps to make Ushguli such a great place to stay isn’t just the buildings but also the surrounding area. There are snow-capped mountains and green valleys that make you feel you could be in Lord of the Rings or any other fantasy franchise.

It’s fairly easy to reach from the regional center of Mestia. If you love hiking then you could make this into the trip of a lifetime. Taking a picture of the valleys in the foreground in the huge mountains in the background will give you one of the most Instagramable pictures ever.

We’ve already looked at mountains, caves, rivers, lakes, valleys and unique rock formations and now we can also add canyons to the lost. It just goes to show that if you’re looking for natural wonders then Georgia has it all.

The emerald green Abasga river runs through the canyon. If you wanted to view it then the best idea would be to get on a boat and go through it while you check out the wonders above. Another great idea is to hike at the top of the canyons.

If you were enjoying a long vacation in Tbilisi and wanted to see something spectacular then it’s around 175 miles from the capital. Both of the canyons are quite close together and both are going to have your jaw-dropping when you see them.

While the Krubera & Veryovkina caves are the deepest in Georgia, the Sataplia & Prometheus are probably the most interesting and also the most tourist-friendly. There is a museum on the site and it’s also quite family-friendly.

You will be able to see dinosaur footprints, stalagmites, and unique cave structures. Unless you’re going to be too scared to head out on it, there is also a raised glass-bottomed platform where you can see the landscape of Kutaisi.

The Prometheus Cave is a great option, especially for those who don’t like the idea of tight spaces as the caves are very high. It’s around 160 miles from Tbilisi and it’s great for an overnight stay as there are many great Georgia hotels dotted around the caves.

While the Katskhi Pillar is one impressive rock, the Birtvisi Rocks are a range of rocks that jut out from the surface. There are some high points around the rocks where you are going to be able to climb up and cast your eyes over all of the structures.

They are cone-shaped rocks are can be found in the Trialetti National Park. If you’re heading to Tbilisi for any significant time then it’s a great idea to head out there. The journey only takes around an hour from the capital and is well worth the round trip.

As well as the amazing structures there are also the ruins of an old fortress that once stood in the area. There is a staircase cut in the rocks to reach it where you can see even more amazing views. It’s incredible nature and history all wrapped up in one.

Georgia is full of beautiful lakes but the Abudelauri Lakes probably take the title of being the most beautiful in the country. There are green, blue and white lakes that are unique due to their surrounding environment.

The green lake contains a lot of vegetation, the blue lake’s water is pure with a blue tint and the white lake has cloudy water from the glacier that flows into the lake. Added to that turbid water is the fact that the water also often reflects the snowy peaks above.

It takes a bit of climbing to get there but if you love hiking then you are going to find it worth it with interesting settlements along the lake. It’s located in the very north of the country and would be a two and a half hours drive to get to the area.

Situated in the north east of Georgia, Tusheti National Park is probably the best national park in Georgia but it faces some stiff competition. You’ll feel serene while you’re there and it’s no exaggeration to say that you’re not going to see a more scenic environment on Earth.

The national park has it all with valleys, rivers, and mountains making for some of the best hikes you could ever wish to have. Even if you’re not a spiritual person, the area will start to make you feel very philosophical about life.

As well as the landscape the area is also steeped in a rich and fascinating history. Tusheti is going to be able to give you a relentless onslaught of epic nature. If you get to see wispy clouds descended over the area then it’ll start to feel very enchanted

We chose 11 places in this list but in reality, we could have chosen hundreds. If you travel to Georgia you’ll find natural wonders at every turn. If you plan your Georgia tours well then you may be able to get a few of these amazing sights in one trip.

If you do, there’s a good chance you’ll keep coming back to Georgia to see the rest of them. Hopefully, this has whet your appetite to see the best natural wonders in Georgia, whether that is on top of a mountain, at the bottom of a cave, or somewhere in between.