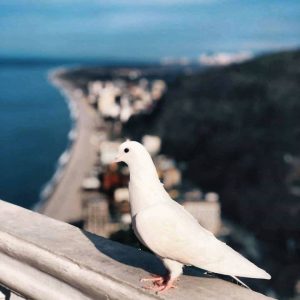 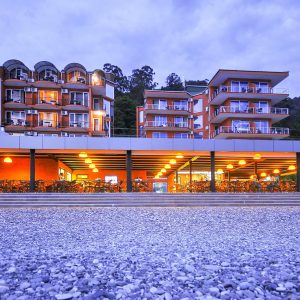 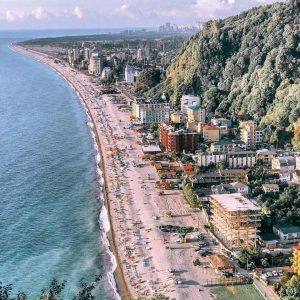 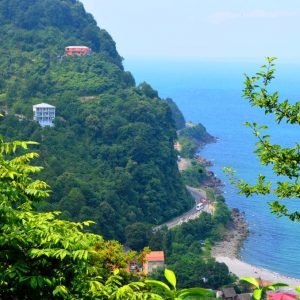 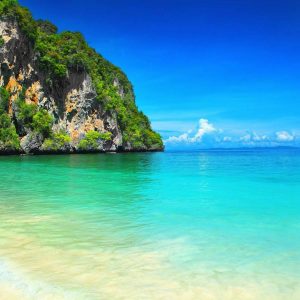 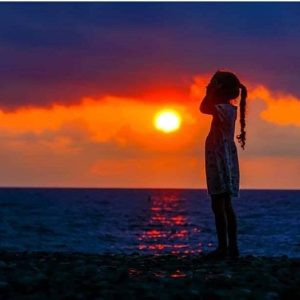 Kvariati has everything you need for a fantastic vacation in Georgia: a sublime subtropical climate, incredibly beautiful nature and rich historic Georgian monuments. Its small and beautiful resort is perfect for those looking to get away from the bustle of city life, and escape into some peace and quiet.

THINGS TO DO IN KVARIATI

Nestled on the Kakhaberi Plain, along the banks of the Kvariati River, Kvariati is an urban village in the Adjara region of southwest Georgia country. Part of Khelvachauri district, Kvariati is divided into 2 parts: the upper part on the hillsides above the highway; and the lower part near the water, where all the tourist infrastructure is concentrated.

The perfect seaside getaway, Kvariati boasts a wonderful mix of sea and mountains in its gorgeous sea resort situated along the eastern coast of the Black Sea. Because there are fewer tourist crowds, Kvariati is a great place for a romantic getaway or family vacation. Although not as active as Batumi, Kvariati does offer a choice of entertaining things to do in Georgia.

Stretching 1km long and surrounded by towering mountains, Kvariati’s beach is among the cleanest in Georgia. It is covered with pebbles, lapped by the warm, crystal-clear waters of the sea. The place is generally quiet, which makes it a great spot for relaxation.

While swimming in Kvariati, enjoy amazing panoramas of the surrounding emerald-clad mountains. Visitors can rent sun-loungers and umbrellas to sunbathe on the beach, or take barefoot walks at sunset. Active vacationers can engage in diverse watersports such as boating, diving, jet-skiing, kite surfing and parasailing.

Kvariati is also popular with diving enthusiasts who come to see the old shipwrecks sunken at the bottom of the Black Sea. There is a diving center with experienced instructors to provide training for beginners. Serious divers can even get their PADI diving certificate in Kvariati. Hikers can also enjoy long walks along mountain trails while spotting subtropical flora and fauna.

Kvariati is also famous for its wellness benefits arising from natural aromatherapy, which offers beneficial effects on the respiratory system. This is thanks to the saturation of air with eucalyptus tree scents emanating from the strip of eucalyptus grove that grows on the mountain slopes.

The combination of fresh mountain air enriched with the aroma of eucalyptus, cool sea breeze and abundant sunshine make Kvariati perfect for a relaxing and healing vacation. Moreover, bathing in the pure waters of Kvariati’s Black Sea also rejuvenates the body.

Although it boasts pristine beaches that stretch out against a dramatic backdrop of lush green mountains, Khelvachauri is more than a seaside destination. Beyond Kvariati, Khelvachauri offers an array of places to go in Georgia.

Located 2km from Kvariati, Gonio Village boasts a natural combination of sea and mountain climate, crystal-clear waters, pristine Georgian nature, and a fantastic resort. Nestled on the left bank of River Chorokhi, Gonio Sea Resort offers visitors a fantastic seaside with clean beaches. Some of the finest in Adjara, Gonio’s beaches are perfect for swimming.

Gonio is also famous for its ancient Georgian fortress, a Roman fortification formerly known as Apsaros. Located 1.5km from Gonio, the fortress is the main historical site in Khelvachauri district.

Founded in the 1st century AD, Gonio Fortress is located at the mouth of River Chorokhi on the site of one of Georgia’s most ancient settlements. Its strategic location made the fortress an important citadel for the Byzantines, Romans and Ottomans, which is today evident in its architectural layers.

Measuring 245m long and 195m wide, the fortress has 18 towers which are mostly in ruins. On site is a hippodrome and Roman theater dating from the 1st to 3rd centuries. The grave of St. Matthew, one of the Twelve Apostles, is also said to be situated within the fortress. Matthew is said to have come here following the death of Christ and preached his teachings for a long time.

Most of the territory of Machakhela Park is covered with forest that shelters unique flora and fauna. Nature and wildlife enthusiasts can see unique plants, animals and bird species. Two hiking trails lead up the Archangel Mountains, offering panoramic views of the Machakhela and Chorokhi rivers. Along the way, you can enjoy strolling in forests of beech and chestnut.

During the 18th century local gunsmiths in Machakhela Gorge made flint rifles. Today, visitors can see the descendants of the old masters, visit with their families and learn about the manufacture of the Machakhela gun and daggers.

Machakhloba is a traditional festival celebrated in Machakhela Gorge in the second half of September. Festivities begin at the Machakhela Rifle Monument (at the confluence of the Machakhela and Chorokhi rivers), continues in Machakhispiri village and concludes in Zeda Chkhutuneti village.

Surrounded by lush mountains, Sarpi is a small village located at Georgia’s border with Turkey. Sarpi’s sea resort attracts visitors with its beautiful pebble beach and crystal-clear waters. Near the beach is a big rock that rises out of the sea, from which you can dive.

Built in the 6th century, the Monastery of St. Andrew of Sarpi is located to the north of the Kalindere River. The monastery was formerly part of a complex that had three chapels in one. During the late 20s and early 30s, the chapel walls were broken down and its stones used to build a barracks.

Kolkhoba is a traditional Laz festival held in late August/ early September in Sarpi. The festival traces its roots to an ancient holiday related to the cult of the sea during which the Laz people would gather along the coast and swim in the sea. During the festivities, the myth of the Argonauts is performed.

Mtirala National Park is a protected area that spans the districts of Khelvachauri, Kobuleti and Keda. The park’s flora consists of Colchic broad-leaved and mixed forests including sweet chestnut, cherry laurel Oriental beech woods with rhododendron, and Colchic box understories with various lianas.

Common animals include the wild boar, brown bear and roe deer, with bird species such as the booted eagle, golden oriole and eagle owl. Amphibians found in the park include the Caucasian toad, Eurasian mash frog, viper and salamander.

There are also off-road adventure tours available to take you Mtirala Mountain, from where you can enjoy panoramic views of Batumi. Mount Mtirala is one of Georgia’s most humid areas. The name Mtirala (meaning “to cry”) originates from the 4,520mm annual rainfall that makes it one of the wettest places in the Caucasus.

Built at the end of the 18th century, Ortabatumi Bridge is located in Ortabatumi Village over the Korol River. There is also Zvaria Bridge which is located over the Zvaria River; as well as the Kokoleti (Chomakhuris) Bridge.

Guarva Castle: Built between the 6th and 7th centuries, Guarva castle is located on a rocky hillside at the confluence of the Chorokhi and Machakhela rivers. From the pre-feudal fortress, visitors can enjoy great views of the three gorges. Thanks to its strategic location, the fortress was an important post for centuries controlling caravan routes from the eastern Caucasus.

Chkhutuneti Castle: Dating from the 11th and 12th centuries, Chkhutuneti Castle is located on the left bank of the Machakhela River, high on a rocky hill at the confluence of Machakhelistskali and Daviteti Gheli. The fortress once controlled an important trading route that connected the Black Sea with the southern districts of Georgia. ​​

Remains of the medieval Georgian castle include an old prison with a tunnel connected to the river, which was formerly used as a shelter. Near the slope is a medieval stone wine cellar.

Korolistavi Castle: Korolistavi is a castle built on a rocky cliff, at the height of the Koroli River. Today, only the remains of a stone-built tower and the fortress wall with 3 doors are preserved.

Transfiguration Church of Akhalsheni: This is a cross-domed temple located on the shore of Bartskhana, 100m above sea level. The stone church was built by Pontic Greeks who had settled in Khelvachauri towards the end of the 19th century. In the 80s, the church was rebuilt, dome decorations were refurbished, bell-towers were added and a chandelier was hung for interior lighting.

Holy Trinity Mother See of Holy Etchmiadzin: The church is located on the Black Sea coast of the Adjara-Guria Range. From its location 400m above sea level, high on the western slope of the hill, visitors can enjoy wonderful views of the sea and beyond. The church has a dome and inscribed marble gravestones. A stone cross found in the Adjaristskali River is preserved in the church.

Opened in 1984, the Chkhutuneti (Machakhali) Historical and Ethnographic Museum is located in Zeda Chkhutuneti Village. The museum is housed in a stone and wood-built three-storey building that was formerly a mosque, and hosts an array of Georgian artifacts.

THE BEST TIME TO VISIT KVARIATI

Kvariati weather is characterized by a humid, subtropical climate due to its proximity to the Black Sea. The best time to visit Kvariati is during the months of July through August. By mid-September, most tourist places in Kvariati are closed until the next tourist season.

WHERE TO STAY IN KVARIATI

Kvariati has a fairly large selection of comfortable mini-hotels and vacation rentals with everything you need to make your stay enjoyable. Many Kvariati hotels boast panoramic views from their room windows and terraces, while guesthouses give you a taste of local life.

WHERE TO EAT IN KVARIATI

During the summer months, many cafes and restaurants open along Kvariati’s beach, serving excellent traditional Adjarian cuisine and fresh seafood. Dishes in most Kvariati restaurants are simple, no-frills but tasty. Fine Georgian wine is also available. Many Kvariati bars and clubs also open in summer, allowing visitors to experience Georgian nightlife as well.

HOW TO GET TO KVARIATI

For flights to Georgia landing at Batumi airport, you can hire a car and drive 20 minutes to Kvariati (15km). But driving in Georgia can be daunting if you don’t speak the Georgian language or understand the Georgian alphabet. Your best bet would be to get to Kvariati via private transfer.

Everyone knows about Georgia’s popular seaside resorts of Batumi, Ureki and Kobuleti. But some tourists still haven’t visited the country’s other outstanding Black Sea resorts. If you’re up for new discoveries and experiences, Kvariati Sea Resort guarantees a memorable vacation.

If traveling during the summer, be sure to book Kvariati hotels ahead with our travel advisor. If you would like to drive, choose from our modern fleet of rental cars in Kvariati available for hire. We also organize travel to Georgia and Kvariati with private transfers to and from Batumi airport.

Alternatively, create your own custom vacation package that includes the places you’d like to see and things you’d like to do in Kvariati. Tired of the bustle of city life? Order your custom tour to Kvariati today and escape into a summer holiday to remember! 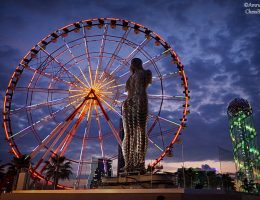 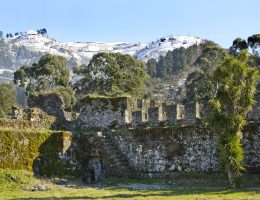 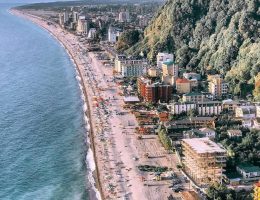 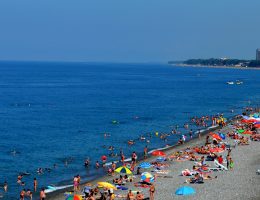 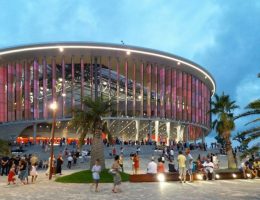 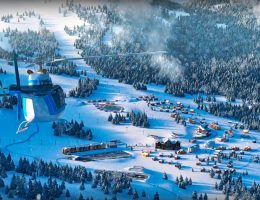