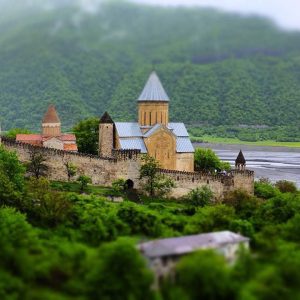 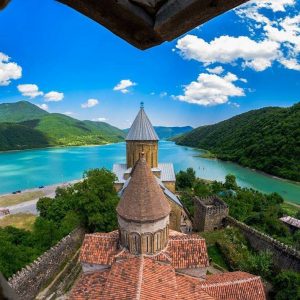 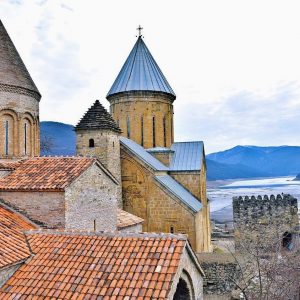 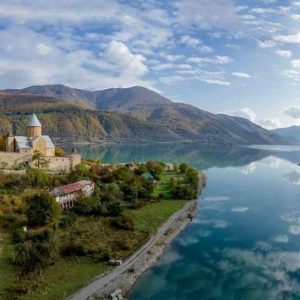 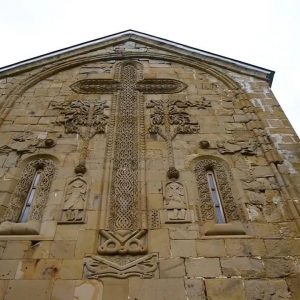 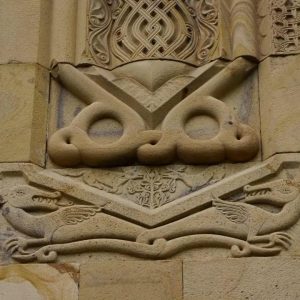 On a scenic drive along the legendary Georgian Military Highway, it’s impossible not to notice the spectacular Ananuri Fortress. Nestled on the shores of the breathtaking Zhinvali Reservoir, the medieval Georgian castle once stood guard over Georgia’s northern borders. Today, it offers visitors insights into the country’s rich history within the surrounds of stunning Georgian nature.

THE HISTORY OF ANANURI FORTRESS

Ananuri Fortress is a castle complex located in the Dusheti Municipality of the Mtskheta-Mtianeti region of eastern Georgia country. Nestled on the left bank of the Aragvi River, along the famous Georgian Military Highway, the fortress is found in Ananuri Village, within the historical province of Mtiuleti.

There are no records on exactly when the fortress was built. However, archaeological excavations indicate that by the 13th century, a hill fort designed to serve as a barrier against enemies, existed in the Vedzathevi Gorge on the left bank of the Aragvi. The earliest written sources that mention Ananuri date from the 17th century.

Ananuri was the seat of the dukes of Aragvi. This was a feudal dynasty that ruled as far as the Tergi Valley from the 13th to 18th centuries. Ananuri was built to protect the main road leading to Dusheti, the capital of the Aragvian duchy. At first, just one tower was built, but eventually, the complex grew into a fully-fledged fortress.

Perfectly chosen, the location of the fortified castle within a narrow gorge, at the confluence of the Aragvi and Vedzathevi rivers, meant that no army could go by unnoticed. This enabled Ananuri to stand guard over the heart of the duchy, as well as protect the retreat road for residents of the Aragvi valley.

However, Ananuri’s strategic location along an important trade route made it attract invaders, from both within and outside Georgia, seeking to take control of the fort. The site of many battles, the fortress played an important role in wars between local feudal princes, and was never conquered. In the first half of the 18th century, the serrated walls of the fortress became the residence of the royal family.

According to Georgian historian Vakhushti Bagrationi, in 1723, Teimuraz II, the ruler of Kakheti, his wife Tamar and young son – later King Erekle II, stayed in Ananuri for over a year, after his army was overrun by the stronger Lezgic forces. Nevertheless, the Lezgins failed to conquer the well-fortified Ananuri castle.

The most dramatic page in the history of Ananuri is the invasion by Shanshe of Ksani in 1739, when the fortress was attacked by forces of the rival Ksani duchy, with the support of Lezgic mercenaries. The prolonged siege ended only after the invaders destroyed the fort’s water supply, which forced Ananuri’s defenders to surrender. The fortress was then set on fire and the Aragvi clan massacred.

Just four years later in 1743, the local peasants rebelled against Ksani rule, killed the usurpers and invited King Teimuraz II to rule directly over them. However, King Teimuraz later found himself facing his own peasant uprising which he suppressed with the help of King Erekle II of Kakheti.

In 1795, the Ananuri stronghold became a haven for residents of Tbilisi and King Erekle II who had escaped a massacre by Persian forces in the Georgian capital.

The fortress remained in use until the start of the 19th century when Georgia was annexed by the Russian Empire. A garrison of Russian forces was deployed in Ananuri to protect the people and the Georgian Military Highway. Later, the Russian troops left the castle, leaving it in a neglected state.

In the 1970s, Soviet authorities began construction of the Zhinvali Hydroelectric Power Plant, along with a reservoir to supply Tbilisi with water. According to the preliminary plan, Ananuri Fortress was to be submerged as well. However, following protest by the Georgian public, the height of the dam was decreased, leaving the medieval fort standing on the southern shores of the Zhinvali Reservoir.

In 2007, Ananuri was added to the Tentative List of UNESCO World Heritage sites, and is today one of Georgia’s top tourist attractions.

THE ARCHITECTURE OF ANANURI FORTRESS

While the castle has survived to this day, it only comprises the upper section of the former Ananuri fort. During the time of the Aragvis, the Ananuri complex of buildings was much richer.

The Ananuri Fortress complex has a rectangular layout and consists of 2 castles joined together by a crenellated wall. Built in the typical architectural design of the Late Medieval period, the fortress comprises a circuit wall with turrets, enclosing several buildings and structures. These include 4 churches, 2 towers, a porch, bell-tower, spring and reservoir.

The upper fortification is well-preserved and has a large 5-storey square-shaped tower called Sheupovari, located in the middle of the western wall. Built with battlements for holding guns and catapults, the tower served as a storage area and was the site of the Aragvi clan’s last defense against the Ksani. The lower fortification has a round tower but is mostly in ruins.

Filling up most of the courtyard, the Church of the Assumption or “Ghvtismshobeli” was constructed in 1689 for the son of Duke Bardzim. The church features a central dome and richly decorated facades, with fine stone carvings of large crosses, human, floral and animal images, and a carved entryway with ancient Georgian inscriptions.

The church also has the remains of beautiful wall paintings, most of which were destroyed by the 1739 fire. The frescoes painted between the 17th-18th centuries depict scenes such as the Last Judgment, as well as portraits of the Thirteen Assyrian Fathers who came to Georgia to spread Christianity. The paintings are regarded as some of the finest examples of Late Medieval Georgian religious art.

There’s another minor Church of Gvtaeba or “Divine Church”, which has some inscriptions on its facades indicating that its dome was built in 1674. The church interiors have numerous frescos of Christ and the Holy Mother.

And then there’s the single-nave Church of Mkurnali or “The Healer”, which dates from the second half of the 16th century. Because the small church is located in the lower section of the fort, it is unavailable to visitors. However, its bell-tower, which consists of arches on an octagonal base, makes for a great photo op of Ananuri when captured against the backdrop of the Zhinvali Reservoir.

Near the entrance to the castle complex is a Khevsurian tower. Tall and narrow, the 14th century tower rises 4-storey’s high and is remarkably different from the other structures around it. It has a unique Svaneti-type stepped pyramidal roof, which is reminiscent of the towers found in Khevsureti.

At one corner of the fortress grounds is a hole that looks like a well, but was in fact the former prison. The hole was made so narrow such that no one could sit down on the ground. Instead, prisoners had to remain constantly standing. In its time, the fortress also had a water supply line, with water coming from the western side of the complex and being stored inside reservoirs.

Boasting beautiful Georgian architecture, Ananuri is one of the most mesmerizing places in Georgia. In contrast to its turbulent past, the fortress is today a quiet and picturesque place to visit.

After an hour’s drive from Tbilisi, you will cross the Ananuri Bridge which links the Georgian Military Highway to the fortress. Seen from the Ananuri Bridge as you approach it, the fortress is truly picture-perfect, with the gorgeous Zhinvali Reservoir as a backdrop. Built over the Aragvi, the bridge also offers stunning views of the surrounding forested mountains.

As is common with Georgian churches, female visitors to Ananuri are required wear a long skirt and a headscarf. These garments can be borrowed at the entrance.

Once inside, be sure to climb the fort walls, which offers a good workout, but is well worth it. Visitors can climb Sheupovari, the tallest of the fortress towers, for fine views of the church dome, as well as walk along the battlements. A picturesque view of the Zhinvali Reservoir spread out below opens up from the base of Ananuri Fortress.

From your vantage point overlooking the reservoir, you can enjoy a surreal experience. The view of the green mountains on both sides of the turquoise waters is a sight for sore eyes. It takes you back in time, letting you imagine how it was to watch enemies approach the castle from the mountains…

You can also see Ananuri Bridge from the castle complex which looks beautiful with the green mountains as a backdrop.

During your tour of Ananuri, your guide will share some fascinating stories about the fortress. One of the most famous is the legend relating to the origins of the fortress’ name, which has been passed down through generations of Georgians.

According to local folklore, when the Tatar Empire invaded Georgia and surrounded Ananuri, the people survived by getting water and fish from the river using a secret underground passage.

Unaware of the existence of this secret tunnel leading down to the river, the invaders believed that the Georgians who had barricaded themselves inside the fortress walls would not survive for long without food and water, and would soon surrender.

After some days under siege, the fortress guards threw fish up into the air to irritate the invaders. At this point, the Tartars realized that the fort had a link to the outside world. For a long time they searched for the secret passageway but could not find it.

Finally, they captured a local woman named Ana, who was from the village of Nuri, and asked her about the location of the tunnel. When Ana refused to reveal the secret to the invaders, she was tortured and killed. Thereafter, the fortress was named “Ana-Nuri” in honor of this woman who remains a heroine in the eyes of Georgians.

While Ananuri holds a lot of history, it should not take too much time to explore. Wandering around and soaking up the excellent views of the picturesque fortress should take you about an hour. It is generally a same-day trip, as there is no place – or need, to stay overnight. In fact it is best to include Ananuri as a stop on a longer trip, on your journey up the Georgian Military Highway.

HOW TO GET TO ANANURI FORTRESS

Perched along the turquoise-colored waters of the Aragvi, the Ananuri castle complex is a perfect example of the unique blended architectural aesthetic of Georgia. Thanks to its proximity to Tbilisi, Ananuri is perfect for a quick getaway from the city, to be dazzled by a historical Georgian monument nestled among beautiful scenery.

It is advisable to book Tbilisi hotels and vacation rentals in advance through our travel planner. If you prefer to drive, we have a modern fleet of Tbilisi rental cars available for hire. We can also arrange for you to visit Georgia and Ananuri Fortress, with private transfers to and from Tbilisi airport.

Even better, create your very own custom vacation package that includes the places to see and things to do in Georgia around Ananuri Fortress. Wondering what the Middle Ages were like? Order your custom tour to Ananuri Fortress today and enjoy a fantastic journey back in time to medieval Georgia! 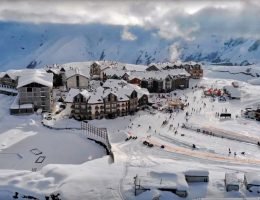