Journey through some of southern Georgia’s illustrious routes before arriving at the quaint town of Akhaltsikhe, whose centerpiece is the charming Rabati Castle. Explore the castle complex that encompasses many beautifully restored medieval structures nestled on a hilltop. With its perfect blend of historic and spiritual treasures, Rabati Castle makes for an amazing day trip in Georgia.

THE HISTORY OF RABATI CASTLE

Nestled on the banks of River Potskhovi, Rabati Castle is located in the historical city of Akhaltsikhe, within the Samtskhe-Javakheti region of southern Georgia country.

Rabati Castle is a medieval Georgian fortress constructed on the site of the original 9th century citadel known as “Lomisa.” Towards the end of the 12th century, Lomisa was rebuilt with a system of city-wide fortifications including high walls, watch towers and guarded entrance gates. It was then renamed “Akhaltsikhe” which translates to “New Fortress” in Georgian.

Its modern name – Rabati, derives from the Arabic word “Rabat”, which means “fortified place.” Rabati was originally the name of the fortress’ trading quarter, which was mainly inhabited by Jewish merchants and craftsmen. Later, the name gradually stuck in reference to the whole fortress.

Between the 13th century and the end of the 14th century, Rabati Castle was the capital of Samtskhe-Saatabago, ruled by the House of Jakeli, a Georgian noble family and ruling dynasty of the Samtskhe Principality. From inception, the Georgian monument attracted many power players over the centuries due to its strategic location.

In 1393, the city was attacked and destroyed by Tamerlane’s army. It was restored only to be destroyed once again a century later by the Mongols. Despite the invasions, the fortress withstood and continued to thrive due to its strategic importance derived from convenient trading routes.

Following the 1590 Treaty of Constantinople, the entire Samtskhe-Saatabago territory came under the rule of the Ottoman Empire. The Turks mostly constructed defensive edifices within Rabati until 1752 when the first mosque was built. By the late 18th century, there was a functioning orthodox church within the largely Islamized fortress.

After the signing of the Treaty of Georgievsk between Imperial Russia and the Kingdom of Kartli, the Georgians made their first attempt to take Rabati Castle in 1810, but failed. Eighteen years later, the fortress was successfully stormed during the Battle of Akhalzic.

Following the collapse of the Soviet Union, there was new stimulus to develop Akhaltsikhe by Georgia’s post-independence government. Between 2011 and 2012, Rabati Castle was restored with extensive renovation and reconstruction of the fortress and its buildings. A museum, hotel, restaurants and other tourist facilities were also built to attract more tourists.

Built on a high hill, Rabati Castle is visible from any point in the Akhaltsikhe. Occupying 7 hectares, the fortress comprises of imposing walls, 4 towers with spiral staircases, an observation deck and several buildings. The complex is divided into an upper (historical) section and a lower (modern) section.

The upper section comprises of the small Jakeli Castle built on the highest point of the complex; the Ahmediyah Mosque, a madrasa, the 9th– 10th century Orthodox church, a 19th century synagogue, a Catholic Church, a bathhouse, and the Samtskhe-Javakheti History Museum.

The lower section features a hotel, cafes and restaurants. There are also shops where you can buy Georgian wine and other local goods. (For a wider selection of souvenirs, be sure to visit our Georgia souvenir shop). From the lower section, a covered walkway leads down to the Potskhovi River.

The centerpiece of Rabati Castle is arguably its mosque. The stone-and-brick Ahmediyah Mosque and its two-storey madrasa were both built in the 1750s. Although no longer used for religious purposes, the mosque sports a stunning new golden dome.

Laid out in front of the mosque is a traditional Ottoman-style courtyard with colonnaded pavilions and ponds decorated in intricate mosaics. Inside the mosque is a display of various artifacts uncovered during excavations.

Another highlight is the Samtskhe-Javakheti History Museum, which houses one of the country’s finest collections of archaeological artifacts. Visitors can browse a plethora of Georgian artifacts uncovered from the Meskheti region, that range from 4th millennium BC Kura-Araxes Culture relics to 19th century regional costumes.

Among the notable museum items is the oldest surviving fragment of the epic poem “The Knight in the Panther’s Skin,” authored by Georgian national poet Shota Rustaveli. While the poem was written in the 12th century, the museum’s copy is said to date back to the 1500s.

A tour of Rabati Castle is a great way to bring things to life. Plan for 2 hours to explore the entire fortress complex and peruse its interesting architectural elements.

Climb the fortress towers and enjoy splendid views of Akhaltsikhe, bordered by mountains overlooking tiny villages. From atop the tower, you will get a better sense of the scale of the rest of the complex. Or take a leisurely walk through its long passageways with hidden vantage points, and immerse yourself in the remarkable surroundings of lush, well-manicured gardens and fountains.

Tmogvi is a fortress perched high above a gorge on the banks of River Mtkvari. A narrow path stretching up the gorge leads to the fortress. Once at the edge of the gorge, panoramic views of the river and mountain await. The majestic Tmogvi Fortress consists of a central temple and several ruined towers. Near Tmogvi is the rock-carved Church of St. Ephraim whose walls have 13th century paintings.

Sapara is a Georgian orthodox monastery located within a densely forested ravine, accessed by an amazing road surrounded by high mountains. Construction of the monastery started in the 11th century with the Assumption Church, followed by the rest of the complex. The 13th century church of St. Saba is the biggest temple in the complex whose walls are adorned with gorgeous frescoes and carvings.

Vardzia is an underground cave monastery and fortress carved out of the rocky slopes of the Erusheli Mountain on the left bank of River Mtkvari. A caving in Vardzia tour lets you explore the former chapels, libraries, wine cellars, baths and dwellings connected by narrow tunnels and steep stairways.

The star of the show at Vardzia is the Church of the Dormition, with its double-arched entryway, row of bells hanging on the exterior and interior walls decorated with intricate murals.

Situated about 5km from Vardzia, Vanis Kvabebi is a cave monastery complex that comprises of six churches and hundreds of rock caves on 16 floors, used as shelter, market, vault and tomb. Its oldest church dates from the 8th century, while the caves were built between the 9th and 11th centuries.

During the reign of Queen Tamar, parts of the cave and church destroyed by an earthquake in 1089 were rebuilt. In 1204 the old stone wall was reconstructed, and in 1265, the gate, a bell-tower and church hall were built.

Looming over Khertvisi Village, at the meeting point of the Paravani and Mtkvari rivers, Khertvisi Castle once guarded an important road connecting the Byzantine Empire and the Caucasus. One of Georgia’s largest fortresses, the elongated castle is more than 150m long and 30m wide. One of the oldest fortresses in Georgia, Khertvisi Castle has been used as a fortress since the 2nd century BC.

Nestled in the charming Borjomi Gorge, Borjomi is a gorgeous resort town famous for its rejuvenating mineral water springs. Borjomi attracts many visitors with health problems who believe that the mineral waters have curative properties. Adventurous travelers can also enjoy rafting in Borjomi on the Mtkvari River which is one of the best places for white water rafting in Georgia.

Enjoying a scenic ride on the Kukushka train is another popular activity in Borjomi. A 37km narrow-gauge railway line built in 1902, the Kukushka connects Borjomi with Bakuriani Ski Resort. The famous train winds through gorgeous forests before it ascends the magnificent Caucasus Mountains. The train journey is ideal for those who want to enjoy breathtaking Georgian nature.

Nestled in the shadow of the breathtaking Caucasus Mountains, Bakuriani Ski Resort offers some of the best skiing and snowboarding in Europe. An internationally-acclaimed winter sports hub, Bakuriani is perfect for nature and sports enthusiasts. Visitors can enjoy both the Georgian winter, as well as summer outdoors activities.

With its surroundings of breathtaking nature and landscapes, Mitarbi Ski Resort is one of the most beautiful Georgia ski resorts. It is also one of the country’s top destinations for family holidays and ski sporting events. Every year, thousands of tourists and locals flock the resort to ski, snowboard, hike, bike and horse-ride, among other activities.

The Borjomi-Kharagauli National Park is one of Georgia’s most beautiful and pristine forest landscapes. The park offers a spectrum of activities including wildlife and bird watching opportunities within the national forest, which is one of the most ecologically diverse in the country. There are also marked trails available for both casual and advanced hiking.

Nestled within the forested Kvabliani River valley, Zarzma Monastery of Transfiguration is a medieval orthodox monastery in Zarzma Village. The complex has a series of buildings dominated by a domed church and one of Georgia’s biggest bell-towers. The church has richly decorated facades and interiors painted with frescoes. There are also several single-naved chapels, some of which are in ruins.

Located on the hills of Samtskhe-Javakheti at an elevation of 2,070m above sea level, Paravani is Georgia’s largest lake. Thanks to its rich diversity in fish species such as trout, Paravani Lake is one of the most popular fishing destinations in Georgia. The lake is also a favorite among eco-tourists who come to enjoy the picturesque nature of spring and summer.

The best time to visit Rabati Castle is between the months of June through September, when the temperature is mild and pleasant with little rainfall. This is the summer season, and a great time of year for lovers of the outdoors to take road trips, or go hiking and biking in the surroundings of Rabati Castle.

HOW TO GET TO RABATI CASTLE

For flights to Georgia landing at Tbilisi airport, you can hire a car and drive 3 hours to Rabati Castle (209km). But driving in Georgia can be daunting if you don’t speak the Georgian language or understand the Georgian alphabet. Your best bet would be to get to Rabati Castle via private transfer.

Of all the ancient fortresses of Georgia, none of them compare to Rabati Castle in terms of grandeur. With deep influences from diverse religions and cultures well reflected in its beautifully restored architecture, the charming fortress lets you explore Georgia’s rich history in a single location. At every turn, visitors to Rabati Castle are greeted with the most breathtaking vistas.

Due to limited accommodation options, it is advisable to book Akhaltsikhe hotels in advance through our travel advisor. If you prefer to drive, we have a modern fleet of rental cars in Akhaltsikhe available for hire. We also offer Georgia tours to Rabati Castle with private transfers to and from Tbilisi airport.

Even better, create your very own custom vacation package that includes places to see and things to do in Georgia around Rabati Castle. Fancy a detour into the Middle Ages? Order your custom tour to Rabati Castle today and enjoy an amazing journey back in time to medieval Georgia! 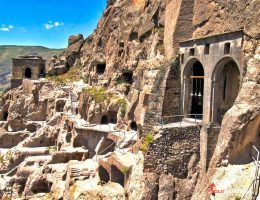 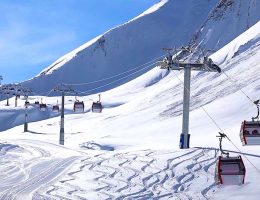