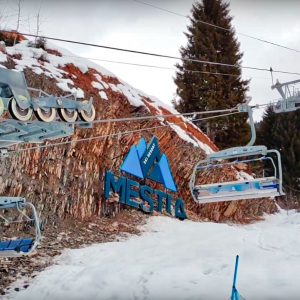 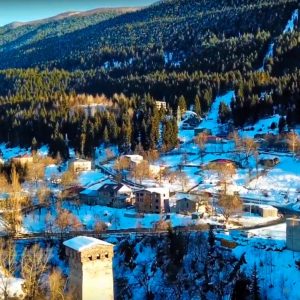 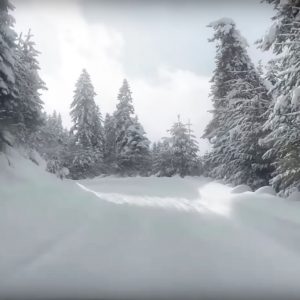 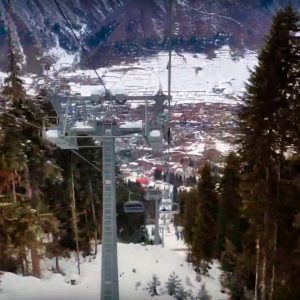 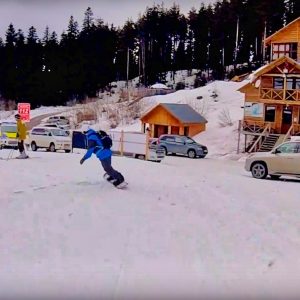 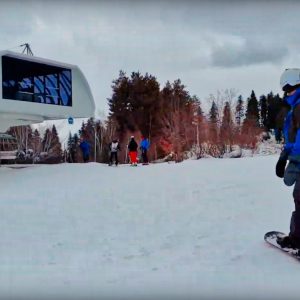 One of the world’s most picturesque resorts, Hatsvali Ski Resort is located within the Samegrelo-Zemo Svaneti region of north-west Georgia. Hatsvali is a young mountain resort with developing infrastructure, offering many opportunities for backcountry skiing to skiers of all levels. Ski tour and freeride lovers will find plenty of good slopes here that offer new challenges for skiing in Georgia.

A rapidly-developing Georgia skiing resort, Hatsvali was opened in 2011. Since the launch of the Hatsvali skiing hub, Svaneti – a remote and forgotten region of Georgia is slowly becoming a true skier’s paradise. Svaneti is an alpine area in the Central Caucasus that is the highest populated territory in all of Europe. Not long ago, Svaneti was a wintry kingdom isolated from the rest of the world. It had impassable roads covered in snow avalanches and snowbound villages forced to live on supplies accumulated during the summer. The situation began to change with the construction of its first ski resort – Hatsvali.

A small airport was opened near Mestia during the same year. Thanks to this new development, reaching Svaneti and the skiing resort of Hatsvali became much less difficult. A good paved road was also built to connect central Mestia and the resort.

During its first season, Hatsvali only had a handful of ski tracks. Since then, new ones are being built every year. As the resort continues to grow and develop, it’s possible to find custom ski-tours with one or two-day trips to take you to places you’ve never skied before.

Although Hatsvali’s popularity continues to grow with each passing year, the resort’s greatest advantage is the small number of visitors on its slopes. The number of guests at Hatsvali is limited by the shortage of accommodation and long travel distance from Tbilisi. As such visitors get to avoid the inconvenience of long queues which are common at most ski resorts.

Hatsvali skiing hub has a humid climate with cold winters and short summers. Ski season in Hatsvali stretches from early December to late May. The resort enjoys 42 sunny days on average per season, which is the average for all ski resorts in Georgia.

A four-season resort, Hatsvali serves its guests all year round. But the passive period is from October to November, during which the ski lifts may be closed. All ski lifts are open during winter, but in summer only one ski lift – Zuruldi is open.

Winter is a great time to enjoy a vacation in Georgia and the Caucasus. The mountainsides are blanketed in heavy snow and first-class resorts such as Hatsvali are ready to welcome visitors to their diversity of slopes for skiing and snowboarding. The month of March is best time to visit Hatsvali. March is the sunniest month with an average of 16 sunny days that make Hatsvali one of the 3 sunniest Georgia ski resorts.

HOW TO GET TO THE SKIING HUB

Hatsvali is nestled in the Greater Caucasus, just 8km from Mestia. Although it is rather far from Tbilisi (460km), the beauty of this enchanting ski resort will more than make up for the long journey. The quickest way to reach Hatsvali from Tbilisi, Kutaisi (218km) or Batumi (271km) is by taking a domestic flight and landing at Mestia Airport.

It is also possible to rent a car in Tbilisi and drive yourself to Hatsvali ski center. Our travel agency offers cars for hire with winter tires that are designed to transport skiing equipment. But if you don’t speak Georgian, driving to Hatsvali on your own can be daunting, which is why we recommend our transportation and excursion services. Our travel agency offers tours and round-trip transfers to Hatsvali from Tbilisi. We have a modern fleet of comfortable cars designed for winter driving on mountain roads. They are spacious to accommodate all your luggage and equipped with roof racks for transporting ski equipment. Our experienced and professional drivers guarantee a safe and pleasant journey.

Hatsvali’s winter sports area is located between the elevations of 1,868m and 2,348m. The ski area is covered in pine forest which makes it ideal for glade skiing. While there are no artificial snow-making facilities, there is a valley run available, and the resort is supervised by rescuers at all times.

The ski resort of Hatsvali has a total of 4 ski lifts available with a total capacity of 4,975 passengers per hour to take skiers up the mountain slopes. Ski lift Hatsvali is a 6-seat chair lift that connects Mestia to Hatsvali Ski Resort, moving from 1,428m to 1,898m above sea level. Bigel and Slalom are small rope tows located at 600m and 800m respectively, which are ideal for beginners skiing on short tracks.

Zuruldi is the main 4-seat chair lift. From the base station at 1,467m, it lifts skiers up Mt. Zuruldi at 2,348m above sea level within 10 minutes. It is ideal for advanced and professional skiers who want to ski on intermediate and difficult tracks.

THINGS TO DO IN HATSVALI SKI RESORT

During both summer and winter, Svaneti becomes a magnet for mountain lovers who come to enjoy the abundance of things to do here. Tourists fond of hiking and exploring ancient cultures flock to this remote mountain region during summer. And in winter, proud Svanetian people welcome guests arriving to indulge in winter sports.

Hatsvali has a children’s ski school with qualified instructors and opportunities to off-track ski and freeride. Here you can go skiing outside tracks – a perk appreciated by experienced skiers, as going down fluffy snow-covered slopes outside the boundaries is strictly prohibited in most other European resorts. Sometimes Hatsvali offers night skiing where the tracks are illuminated by colorful lights.

It’s relatively inexpensive to vacation at the Hatsvali skiing hub during winter. Ski pass prices for a Day Ticket during the Main Season is GEL 40 for adults, GEL 25 for children and free for under 6 years.

Hatsvali ski center offers many opportunities for backcountry skiing with routes that lead to the slopes of mountains Tetnuldi, Ushba and Shkhara. Skiers of all levels also have the opportunity to slalom, giant slalom, downhill ski and more. Visitors at Hatsvali can also enjoy snowboarding activities on the slopes or freeride in deep snow. Skiers and snowboarders can rent equipment from the resort.

A paradise for freeriders, Hatsvali is the best ski resort in Georgia to learn how to freeride. Freeriders can experience many different types of cover, from forest and natural ramps to steep angled slopes and natural obstacles. This enables expert skiers to try new experiences and find new adventures. Moreover, the slopes of Hatsvali are covered in pine forest, which decreases the chances of avalanches, making the area safe for freeriding. The freeriding areas are quite wide and pass near ski trails or through beautiful landscapes.

There are endless opportunities for ski touring at the ski resort of Hatsvali. Several excellent ski tour routes enable you to see the majestic snow-capped peaks of Tetnuldi and Ushba. Ski touring from Mestia is only possible during the coldest months of winter, although many higher valleys are accessible in a 1-3 hour drive during springtime. Ushguli, Mazeri and Adishi are the ski touring hotspots, with guesthouses and single to multi-day ski touring options.

Fans of trekking will enjoy their time in Svaneti as there are plenty of hiking opportunities with spectacular views. One of the most popular hikes is the 4-day trek from Mestia to Ushguli, one of the most remote Georgian villages and the highest settlement in Europe.

If you prefer day-trips, go hiking to Chaladi Glacier on a relatively moderate hike with little elevation gain, extending into a frozen zone. Hiking to Shkhara Glacier is one of the most beautiful hikes you can do in Svaneti as it offers amazing views of Georgia’s highest peak. Also hike to Koruldi Lake, one of the most stunning lakes in Georgia.

There are plenty of mountain trails where you can go horse riding in Mestia. You will see picturesque ranges, alpine valleys and interesting cultural sites such as ancient houses, towers and churches with beautiful frescoes. Your guide will also share lots of interesting stories and legends along the way.

It is also possible to go biking in Svaneti on mountains Hatsvali, Tetnuldi and the country’s highest mountain, Shkhara (5,201m). Go up by cable car and then downhill in an amazing single track while soaking up the amazing views of the surrounding mountains covered in ice and snow.

Located at the top of the Hatsvali lift station, Café Zuruldi is the highest restaurant in Georgia. The restaurant has a lovely terrace and panoramic windows that offer breathtaking views of Mt. Ushba. Famous for its steep rock massifs, Mt. Ushba is the epitome of beauty amongst the Caucasus Mountains.

A great spot for après ski, Café Zuruldi serves delicious Georgian cuisine including regional specialties such as kubdari (pork meat pie) and tashmijabi (mashed potatoes with sulguni cheese). There is also another restaurant – Café Hatsvali, located on the lower station.

Hatsvali Ski Resort is located in the Upper Svaneti region, a UNESCO World Heritage Site, and one of Georgia’s most historic areas where the nature is still mostly untouched. Preserved by its long isolation, Svaneti is a fine example of stunning mountain scenery peppered with medieval-like villages, ancient stone tower houses, churches and forts. Choosing Svaneti as your winter vacation destination is a great decision, as its ancient traditions and excellent skiing opportunities make for a lovely holiday combination.

Serpentine mountain roads lead you to Mestia town, the heart of the region. From here, routes to farther amazing destinations in Svaneti begin. Mestia is the capital of the Svaneti region, home to Georgia’s Svan minority who boast a unique language, cuisine and architectural heritage.

Until recently, Svaneti was best known for its Svan Towers, marvelous house-towers which line the valleys, the oldest dating back to the 8th century. In ancient times, the towers were used both as dwellings and defense posts against invaders. The village of Chazhashi in Ushguli has over 200 of these house-towers.

If you visit Svaneti in February, ten weeks before Orthodox Easter, you can witness Lamproba, a half-pagan, half-Christian Svanetian feast dedicated to the commemoration of ancestor souls. On this night, Svans organize torchlight processions, make bonfires, pray and enjoy a festive meal.

Other notable places to visit in the region include: the Museum of History and Ethnography, House-Museum of Mikheil Khergiani, the Transfiguration Cathedral in Laghami, Lamaria Church and the Becho Community.

WHERE TO STAY IN HATSVALI

Hatsvali Ski Resort has a hotel for its guests. There is also a range of accommodation options available at Mestia with hotels and vacation rentals to suit all preferences and budgets. Mestia is a convenient point to stop overnight before moving to the ski lifts, equipment rentals, marked pistes and virgin slopes of Hatsvali. Mestia is well-developed for Georgia tourism and serves as a summer hub for trekking tours, as well as a winter destination. Visitors can also stay overnight in the surrounding villages of Mazeri, Mele, Lentekhi and Soli. 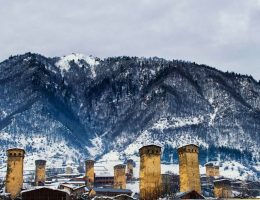 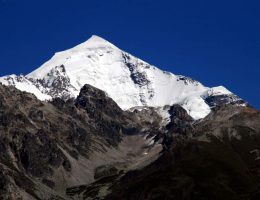 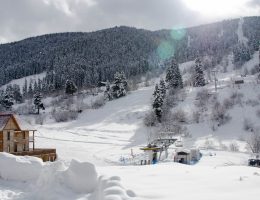