10 Places You Have to Visit in Mtskheta

10 Places You Have to Visit in Mtskheta

Mtskheta is one of the old cities within Georgia and has some of the richest histories of any city in the world.

It’s located approximately 20 kilometers north of Tbilisi. It sits at the confluence of the Aragvi and Mtkvri rivers.

It’s recognized as a United Nations Educational, Scientific and Cultural Organization World Heritage Site in 1994 as is notable for being a stronghold of Christianity in Georgia. It continues to serve as the base for the Georgian Orthodox Church. The same church declared Mtksheta as the “Holy City” in 2014.

For almost an entire millennia, Mtskheta was an enormous, fortified city and was a significant influence on the Kingdom of Iberia centuries ago.

Nowadays, it holds a small population but has large, deep roots that are a fabric of history.

Mtskheta isn’t meant for the nightlife, or restaurants, or bustling industry. The quiet nature of the town is meant for those who care about some of the most intriguing and impactful sites on Georgian culture.

Mtskheta is, by far, one of the best places to visit, with the most historic things to do in all of Georgia.

The Svetitskhoveli Cathedral is the best well-known church is all of Georgia and is directly connected to the time when Christianity first came and found the Georgian people. It’s one of the most historically-rich places to visit in Georgia and Mtskheta.

It’s aged marvelously throughout time, even though some of the toughest weather Georgia had to offer.

The test of time has also shrouded the Svetitskhoveli Cathedral in legends. You’ll find many tales of the Cathedral from the time when it was a buzzing hotspot for Christianity, centuries ago.

Tales include the story of King Giorgi ordering the amputation of a hand from the Cathedral’s architect so that he may never create something so beautiful ever again.

Another tales spins the story of how there is a seamless robe of Jesus Christ buried beneath the temple. In other words, it is known as the burial site of the claimed Christ’s mantle.

Beyond the burial of Christ’s mantle, it has also served as the burial place for kings throughout the year.

For its significant relevance to history, UNESCO honored the Cathedral with placement on its World Heritage list for the amazement of its architecture.

However, it is considered an endangered cultural landmark due to the whitewashing of the Russian Imperial authorities in the past.

Samtavro Monastery is another religious site within Mtskheta of incredible note.

The monastery itself is surrounded in mystery as no inscriptions are left that can tell us about the time of its construction. Georgian hagiographic sources state the monastery was established sometime in the 4th century, possibly during the time of King Mirian III of Iberia.

It was then that a small church was built there by Saint Nino, a woman who preached Christianity, that directly connected with the conversion to Christianity in Georgia.

Samtavro is translated into English as a “ruler’s place.” This is likely from when King Mirian III and his wife, Saint Nino, were buried within the monastery.

It’s located in the northwest section of Mtskheta and demonstrates a solid example of a cross-in-square temple. The dome rests on two pillars and the projecting walls.

Next to the large monastery lies the small church that was said to be originally built by Saint Nino.

Samtavro is also listed as a World Heritage site by UNESCO

Keeping in line with the other historic religious sites so far, Jvari Monastery is recognized by UNESCO as a World Heritage site as well.

It’s most well recognized for being one of the few early medieval Georgian churches that survived the grueling battle with history and remains relatively unchanged from when it was originally built.

If you’re interested in seeing one of the most accurate portrayals of Georgian history during the peak of conversion to Christianity in Georgia, the Jvari Monastery provides.

It lies atop the Jvari Mountain and serves as the founder of its type of architecture. It’s an amazing example of a harmonious connection with the natural environment which was a key characteristic of Georgian architecture.

Saint Nino’s impact spreads far beyond the Samtavro Monastery as the Jvari Monastery was built upon this site in honor of her.

Traditional accounts tell the story of how Saint Nino erected either a wooden, or vine, cross on the site of a pagan temple. The story claims that this cross was able to perform miracles upon people and it drew attention and visits from all over the Caucasus.

A smaller church was built directly on top of the remnants of the wooden cross around 545 AD, during the reign of Guaram I. It’s named the “Small Church of Jvari.” You’ll be able to see it when you visit – it’s just north of the main church.

The beautiful monastery has withstood the time of time. In the 10th century, it was burned by Arabs, but survived and only required minor repairments to be made.

It’s withstood the attraction of many pilgrims during the Middle age while it was fortified by a stone wall and a gate, the remnants of which can still be seen today. It even survived the Soviet period, at which time the church was preserved as a national monument that had severely limited access. It wasn’t until the independence of Georgia that the monument was made an active religious site once more.

The monastery did suffer some damage from rain and wind erosion over time due to lack of proper maintenance and it was listed in the 2004 World Monuments Watch list by the World Monuments Fund.

Shio Mgvime isn’t within Mtskheta, but it’s short skip, hop, and a jump away.

It’s located approximately 13 kilometers from the city within a limestone canyon.

Shio Mgvime was known to be a beautiful, bustling, community that was populated with an enormous amount of monks. There were, at one point, around 2,000 monks living in Shio Mgvime – a staggering amount, for the time.

Shio Mgvime isn’t just one monastery, it’s a complex that was built over a long period. It was truly a religious hotspot for the region.

The first monastery that was built was St. John the Baptist’s Monastery and was followed by more as time went on.

While it’s religious history is a large part of Shio Mgvime’s appeal, it’s still not the most unique thing about this historic site.

Shio Mgvime gets its name from the caves that surround the mountain. It is within one of these legendary caves that Shio, the missionary who founded Shio Mgvime, lived. He was one of the 13 Assyrian Fathers who originally spread Christianity throughout Georgia. Thus, the Shio Mgvime complex was born.

The Pompeous, or Pompey, Bridge became famous or its significance in the battle between the Roman military, Pompey, and the King of Kartli Kingdom Artagi.

Pompey’s forces were able to quickly strike and capture the pass that led into Iberia and seized a fortress. He took shelter along the bank of the Mtkvari river, where the city of Mtskheta lies now.

Pompey burned the bridge to stop the Romans from access to cross.

A truce was offered and the Romans were promised that the bridge would be restored and food would be given to supply them with. True to their word, food and supplies came to prevent death from befalling the Romans.

Upon restoring the bridge, Pompey crossed it with his men in tow and attempted to seize the King.

In more modern times, the Pompeous Bridge wasn’t easily visible to the public. In 1926 the Zahesi hydroelectric power station was built and the bridge was submerged. However, you can still see the bridge if the water levels run low enough.

The bridge still stands to this day and is one of the most interesting non-religious things to do within Mtskheta.

Bebris Tsikhe is a medieval fortress that lies upon a mountain in northern Mtskheta.

Originally the fortress was built to protect the city as well as Tbilisi from the north – the side of the Greater Caucasus Range.

The walls are more than two meters thick and are built with equally large stones, with two levels that separate the fortress and three towers at each corner of the triangle that it forms.

While there is no written documentation about the origin of the name, legend surrounds its source. Religious tales say that the original owner of the fort gave his soul to God and since that day it has been dubbed “Bebris Tsikhe.” This translates to English as “fortress of an old man.”

The Zedazeni Monastery is a Georgian Orthodox monastery that is located just outside of Mtskheta within the hills of Saguramo. It lies to the east side of the Aragvi River.

It is said that this monastery was founded by Saint John, one of the original 13 Holy Assyrian Fathers.

Saint John is said to have had a large impact on strengthening Christianity within Georgia and overall helping the country to entirely convert.

While Mtskheta isn’t the best place for a jam-packed nightclub, that doesn’t mean you can’t have some alcohol on your journey through history.

Wine enthusiasts will be happy to know that Chateau Mukhrani wine tours are incredibly popular amongst tourists visiting the area.

You’ll be able to visit and take a 30-minute tour of the Georgian royal family estate that was built in the 19th century. The entire chateau is filled to the brim with wine cellars of rich origin and flavors.

You’ll learn about the royal family as well as the intricacies behind Georgian wine-making.

If you’re visiting the city, this can be a nice stop to relax and enjoy before wandering to one of the traditional sites of the area.

You’ll also be able to taste and buy one of the many fine wines available.

Wine and history have always been a great combo.

Gvinis Palata, otherwise known as The Wine Chamber, is another place to visit where you can incorporate alcoholic beverages into your visit to Mtskheta. It can also double as a fabulous date night for you and your significant other.

This is a restaurant, but you should be paying extra attention to the wine available. You’ll be able to drink and taste many different selections of wine while experiencing an amazing view of the city and the Jvari Monastery.

Even if you’re not a drinker, you’ll still find plenty of fun, food, and learning while visiting.

You’ll hear the stories of incredibly rare and expensive Georgian wine as well as grapes. You’ll learn the process of baking traditional Georgian bread. And, on top of everything else, you’ll be dancing along to Georgian folk songs to make it all the merrier.

It’s definitely a can’t miss evening while you’re in Mtskheta.

If we’re going to talk about the beverages of Mtskheta, we must mention the food as a delicious thing to do while visiting.

Salobie translates into English as “a place to eat beans.” Beans are an incredibly popular food within Georgia and are significant in the cultural world of food.

Salobie is the most traditional restaurant you’ll find in Mtskheta, perfect for those who want a truly authentic experience to top off their visit.

While any plate of authentic Georgian food is delicious, you must do as the name states and try beans in a pot with some Mchadi, a traditional cornbread.

If that’s not your cup of tea, don’t worry, almost any Georgian food is hard to go wrong with. 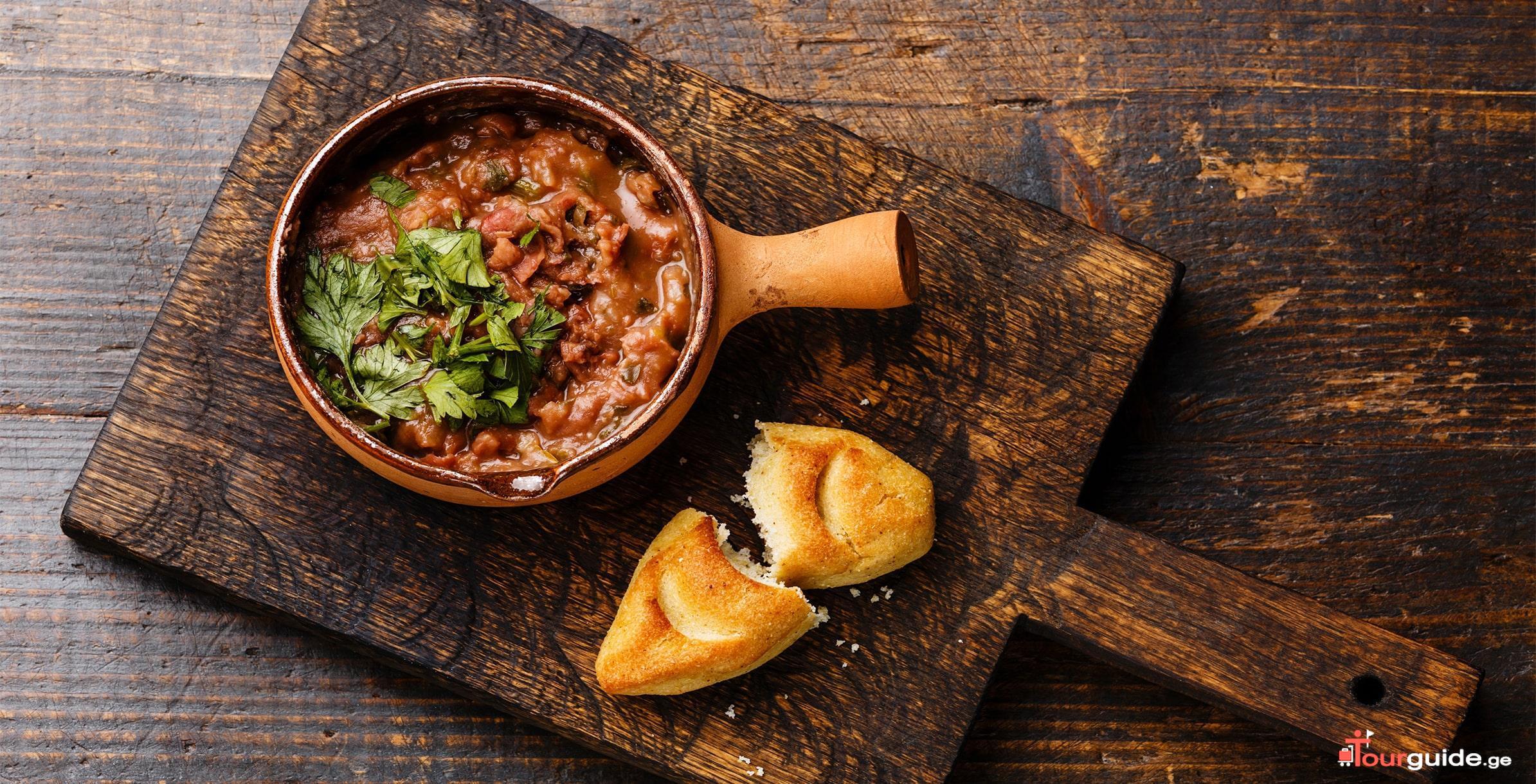