If you’re wondering what to do in Georgia, fine dining in Tbilisi is the one thing you cannot afford to miss. The crown jewel of Eurasia, Tbilisi is fast becoming famous for its distinct cuisine that wonderfully blends the flavors of its European and Asian neighbors. The Georgian capital today boasts a burgeoning food and wine culture that draws travelers from around the world. Classic Eurasian cooking continues to reign supreme among the traditional Tbilisi restaurants, the best of which have earned spots on our list of the top restaurants in Tbilisi. 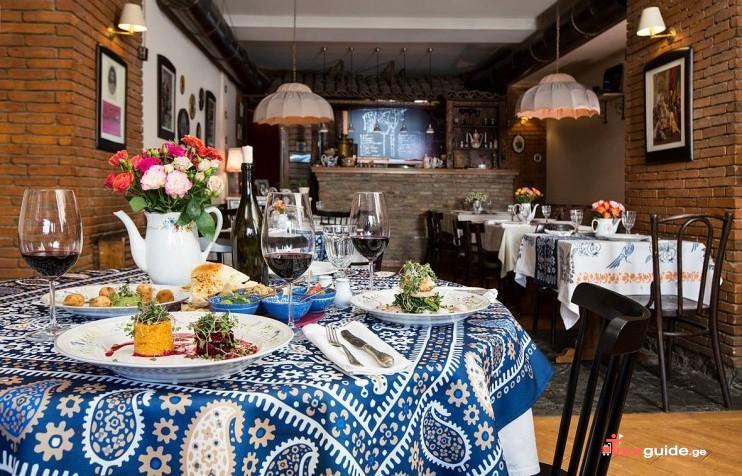 At Barbarestan, a cookbook is the star of the show. But this isn’t just any ordinary cookbook. It was authored by Barbare Jorjadze, a 19th century Duchess, who also happens to be Georgia’s first feminist. Inside, you will find hundreds of recipes that merge Georgian cuisine with specialties and techniques from around the world. Every two years, Barbarestan hires a new chef to interpret these recipes with their own new twist.

From the outside, Barbarestan looks rather inconspicuous. But its beautifully decorated interiors are what have earned its status as one of the fanciest restaurants in Tbilisi. Further down into the basement you will find an old cellar vault with beautiful walls made from natural stone. The cellar houses a selection of excellent Georgian wines that you can sip beneath the romantic low lighting. Sample the Winiveria or ask the waiters for pairing suggestions.

The menu is seasonal with specialties such as the cheese plate and the crisp, spicy walnut bread. The service is warm and welcoming, and the waiters can tell you many fascinating tales about Georgian cuisine. The restaurant was founded by a family of 10 children with the noble mission of serving classic Georgian dishes prepared from traditional recipes. On Saturday nights, the restaurant offers live retro Georgian music.

Come for the family-friendly atmosphere, but stay for the authentic Georgian cooking. Barbarestan is one of the most expensive Tbilisi restaurants, but it will be worth every dime. We recommend reserving your table in advance. 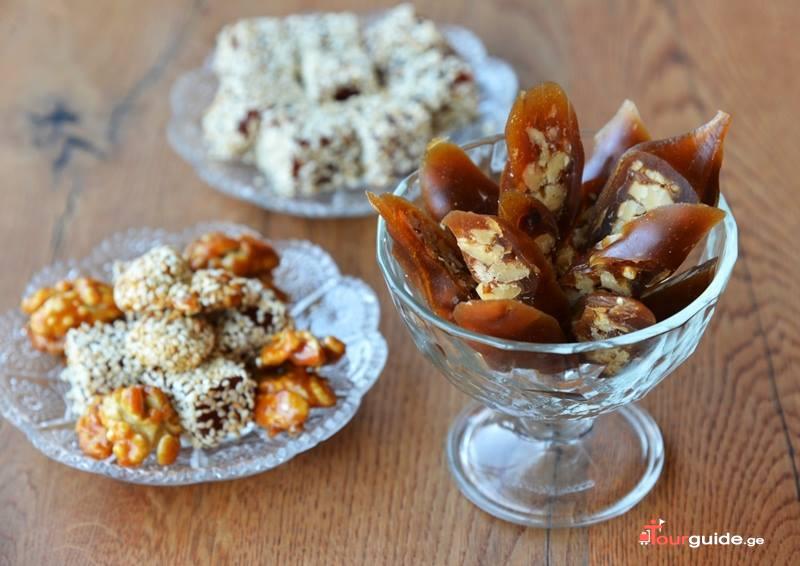 A must on any Tbilisi restaurants checklist, Kakhelebi is a favorite among lovers of traditional Georgian cuisine. With its simple design, Kakhelebi is as Georgian in its décor as it is in its menu. The restaurant has a farm-to-table ethos that ensures all its ingredients are directly sourced from the surrounding region. Georgian cuisine takes center stage at Kakhelebi with all of the country’s famous dishes featured here.

Of all of the traditional Georgian restaurants in Tbilisi, Kakhelebi is the one most popular among locals who come for its delicious khinkali. The skin on these sublime soup dumplings needs to be thin enough to show the meaty filling, but thick enough to hold in the savory juices. And Kakhelebi achieves this fine balance, which makes their dumplings worth the brief detour outside the city center.

Like any good tavern, Kakhelebi also offers a selection of marvelous wines and home-brewed chacha which is delicious albeit lethal. Reserve a table to enjoy an early dinner as they close at 9 pm. 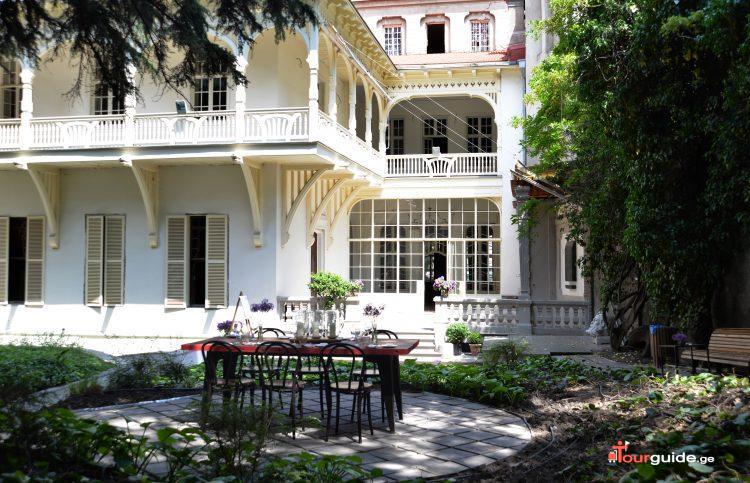 Café Littera is a popular restaurant in Tbilisi as much for the setting as the food itself. The café is nestled within the leafy surrounds of the Writer’s House courtyard, a historic building where many of Georgia’s writers from the previous century lived and worked.

Owned by Chef Tekuna Gachechiladze, arguably the queen of Georgian cuisine, Café Littera is best known for putting a modern twist on traditional dishes. Chef Tekuna was among the first to introduce international fine dining to Tbilisi, and she continues to lead the city’s high-end food scene.

At Café Littera, she continues to play with traditional local ingredients such as adjika (Georgian hot sauce), wild mushrooms and sunflower seed oil in dishes such as wild trout tartare and seared duck breast. Be sure to sample the chakapuli (stew) served with mussels rather than lamb, or the kharcho, a traditional rice and beef soup alternatively made with delicious shrimps. All wines served here are local and you may make a selection from their extensive list of organic options. 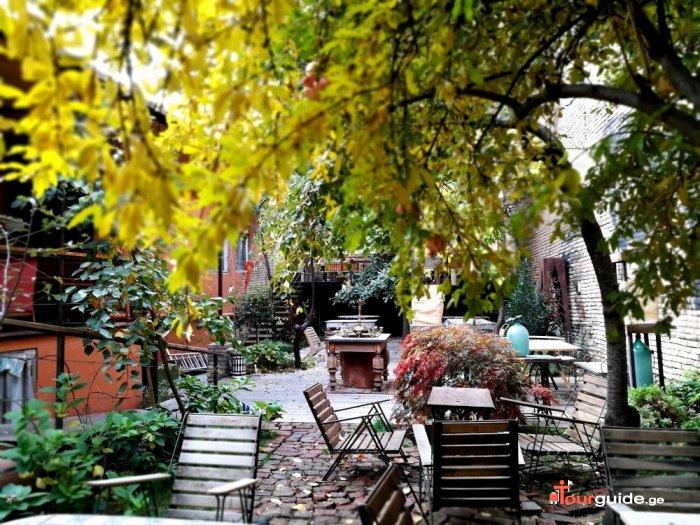 Opened by an award-winning local chef and three of her friends, Shavi Lomi was once a best-kept secret among those in the know in Tbilisi. But today, it’s a culinary hotspot whose 10 tables rank among the city’s most coveted restaurant seats.

This cellar restaurant pays homage to Niko Pirosmani – Georgia’s beloved artist, famous for hearty feasting scenes –  by serving up dishes to match. Shavi Lomi offers classic Georgian cuisine with newly interpreted dishes. The menu is extensive and enticing, and you can’t go wrong with any of the items.

Go in a group and order the ghobi for starters – this platter of traditional appetizers will set you up for a wonderful supra (feast). For your main, we recommend the beef shank (artala) in saperavi (wild-plum bouillon) – truly sublime.

As with other high end Tbilisi restaurants, reservations are typically essential, especially if you want to dine inside the vibrant garden courtyard. Here you can enjoy your meal shaded by tall trees and enclosed by old red brick walls adorned with a mural of the “shavi lomi” (Black Lion). 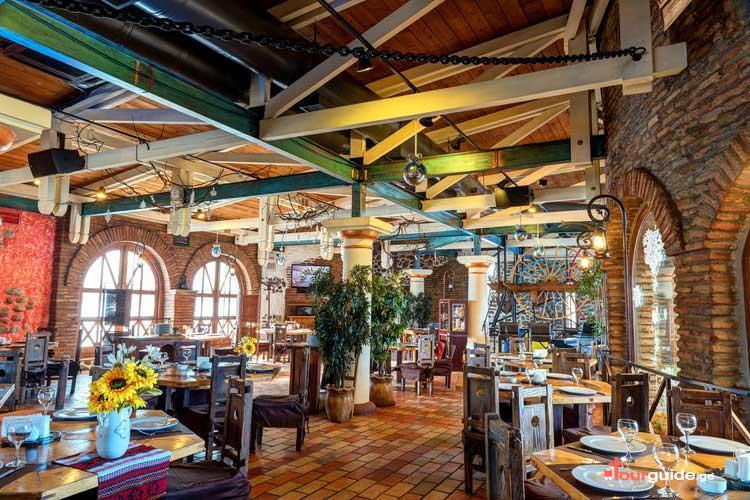 Tsiskvili offers a splendid setting for fine dining in Tbilisi overlooking the river. Popular among the locals, the restaurant is usually filled with party groups enjoying delicious Georgian food and wine. Tsiskvili offers daily live performances of traditional Georgian music and dance shows, which adds a nice touch to the cozy ambiance.

The food is absolutely divine and the menu is varied with offerings of Georgian specialties such as mtsvadi (grilled meat skewer). Their khachapuri (a pizza-like bread filled with white cheese) is deliciously sinful to say the least.

The waiters are courteous and while most do not speak English, this only adds to the local experience. The in-house sommelier is very helpful with suggestions of a wide variety of local wines to accompany your meal. 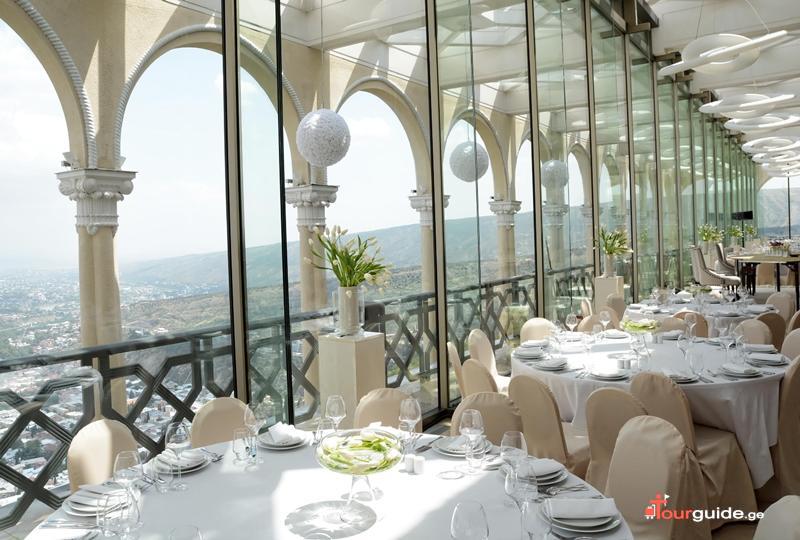 The Funicular Restaurant offers classic Georgian dishes with a twist, prepared from the finest ingredients. The menu is varied with specialties like veal shin with tomato and seafood soup. The in-house sommelier can give recommendations on the perfect wine pairings for your meal.

Once you’ve had your fill of delicious Georgian cuisine, you may take a romantic walk in the surrounding park and enjoy the fresh air. We recommend going up the funicular at night to enjoy views of the city illuminated in the dark. 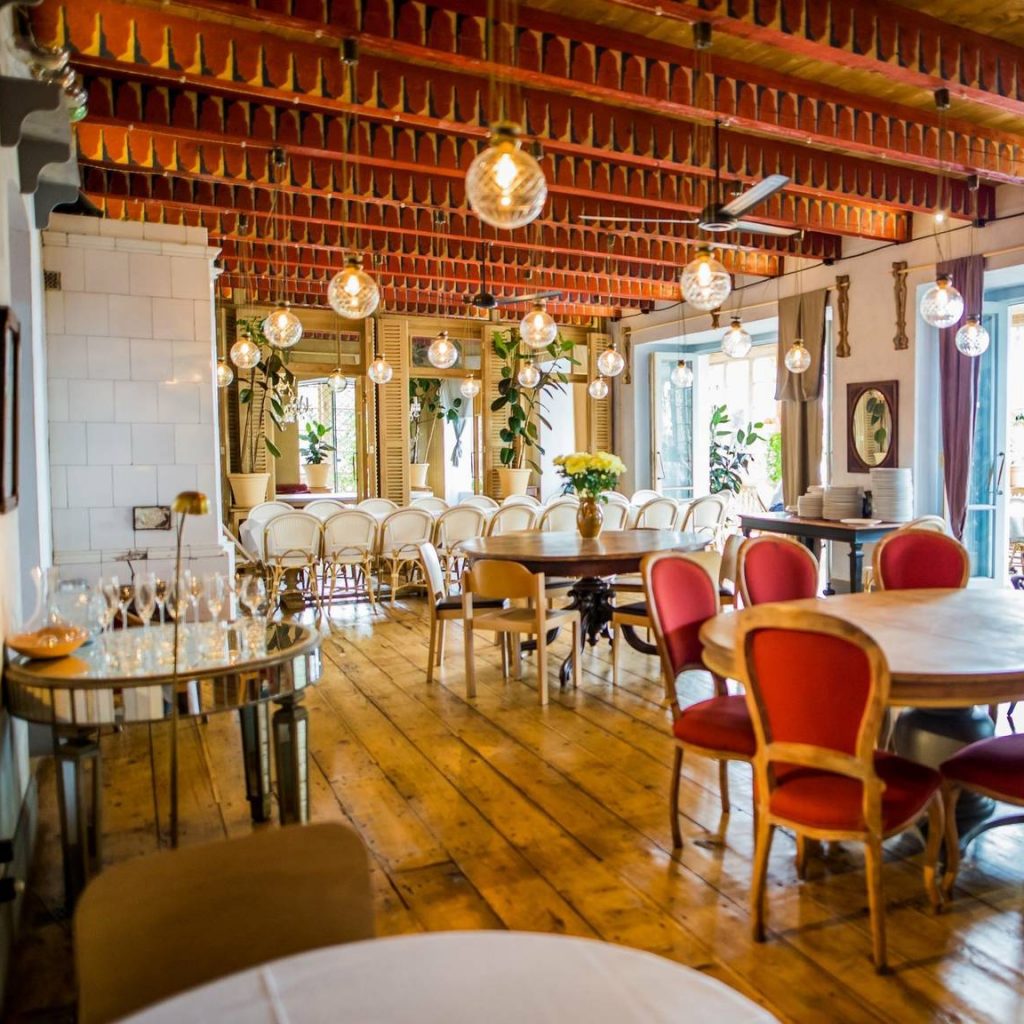 A big part of Keto and Kote’s charm lies in its “hidden location.” You may need Google Maps to find this Tbilisi restaurant, but the inevitable detour will be well worth your while – we promise.

Perched high above Tbilisi inside a beautifully restored home, the architectural style of Keto and Kote features local touches such as romantic Georgian balconies and corbels. The chic interiors are a showcase of old-world Tbilisi glamor, with ornate chandeliers suspended from high ceilings over wicker chairs arranged on stripped floorboards.

The restaurant does a great job of giving traditional dishes a contemporary European twist without losing their essence. The khinkali (soup dumplings) crafted by owner chef Ramaz Gerniashvili are a culinary triumph, while his tolma (stuffed vine leaves) are superb.

To top off your dinner, order a glass of chacha (Georgian brandy) that is made with residual grapes from the winemaking process. Be sure to book in advance for an al fresco dinner underneath the fig-tree shaded balcony that overlooks the city. 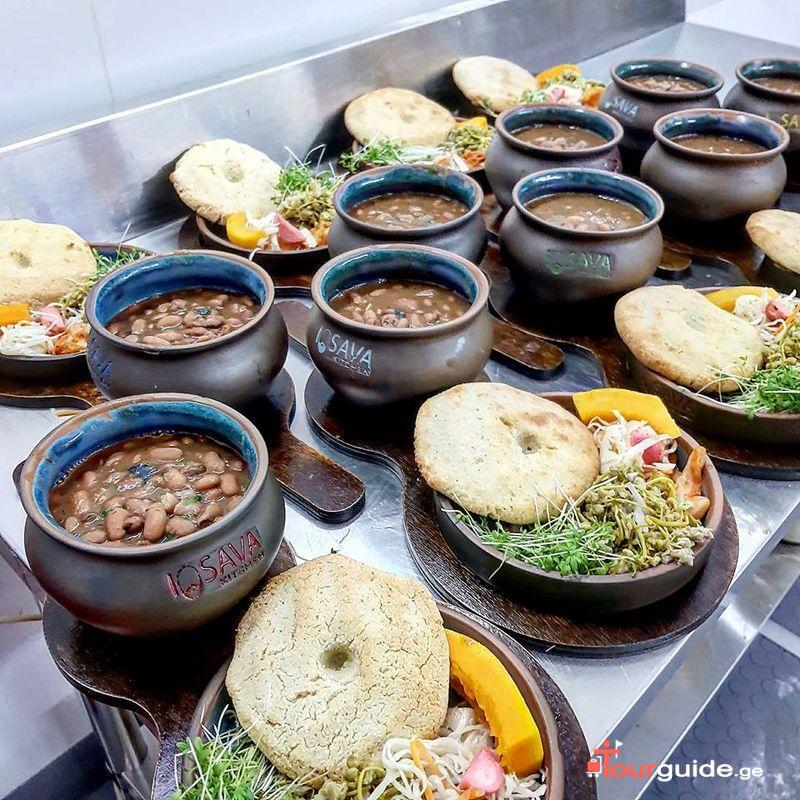 Salobie Bia restaurant is a tribute to the culinary delights of Western Georgian cuisine, which is typically hotter and spicier than that of Eastern Georgia. Salobie derives from “lobio” – the Georgian word for bean stew, which roughly translates to “the bean place.” And Salobie Bia’s version of lobio is widely acclaimed to be one of the best in the city. Diners are treated to a spicy bean stew with onion, garlic, coriander and chili, served in a clay pot with mchadi (corn bread).

The rest of the menu is equally fantastic with offerings such as the sulguni (cheese) and kupati (sausage). The selection of fine wines is easily matched by the delicious food.

A gem among Tbilisi restaurants, Salobi also delights with its creative furnishings that include many pictures of modern Georgian artists on the walls, some of which are available for purchase. The food and ambience are casual enough for a simple yet delicious lunch, but special enough to suit a celebratory night out. Don’t leave Tbilisi without dining here. 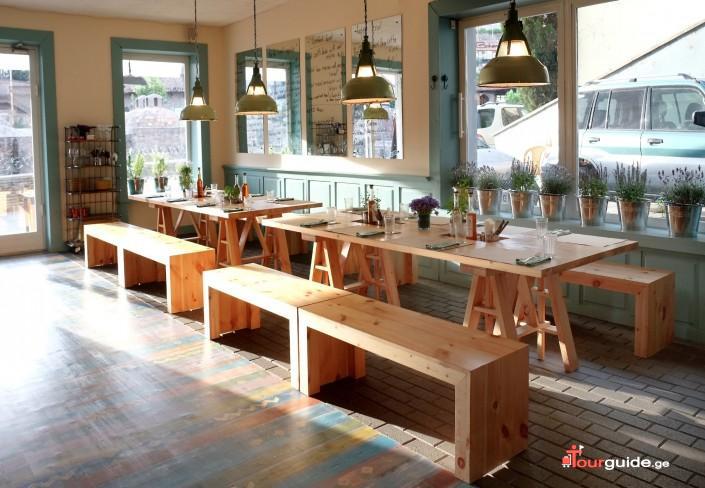 If you can only visit one of the restaurants in Tbilisi, go to Culinarium Khasheria. Cozy yet stylish, Culinarium Khasheria is a perfect foodie stop during a tour of Tbilisi’s Old Town. Its inviting exterior alone is enough to make you want to enter, and once inside, the food does not disappoint.

The restaurant serves up delicious meals in ambient surroundings from a menu curated by Tekuna Gachechiladze, the pioneering chef responsible for the modernization of Georgian cuisine. The food is famously good, with a modern twist on popular traditional dishes that produce incredible flavors that are fresh, vibrant and varied.

Although everything on the Culinarium menu is certain to delight, we recommend choosing from the “hangover cures”, a selection of Georgian soups including the traditional dumpling and a leon-mint-tarragon chicken soup, both of which deliver on their promise.

If you’re up for something more than soup, go for the mouth-watering bone marrow. Don’t miss out on the fried sulguni cheese (a fusion of feta and mozzarella) with yogurt dressing. Do yourself a favor and order a large jar of adjika (Georgian hot sauce) to accompany your meal – they make the best in town.

When Restaurant Meama reopened in 2018, it hit Tbilisi like a bomb. Located within the historic Old Town, the restaurant sits in a beautifully refurbished building with blue balconies that exude great charm.

Its famous chef Levan Kobiashvili relies on traditional Georgian cuisine which he marvelously reinterprets. Old and almost forgotten recipes of Georgian classics are revived, modified ever so slightly and blended with international influences. The result are fascinating creations, all beautifully arranged.

The professional service at Meama leaves nothing to be desired and guest always feel at home. If you dare, try a glass of 75% chacha (Georgian brandy) at Meama. While it’s not for weak nerves, its surprisingly fine and digestible.

Of all the places to travel in Georgia, Tbilisi never ceases to impress with its abundance of things to see and do. And just like the whole city, the gastronomic scene of the Georgian capital is thriving. Each year, more and more restaurants in Tbilisi open up.

While international cuisine has made its way into the city, there are still a great number of Tbilisi restaurants offering Georgian cuisine – be it in a traditional or contemporary way. It’s not always easy to keep track of this jungle of culinary delights. But with a good travel agency, you can enjoy a choice of vacation packages that include stops at the best restaurants in Tbilisi.