Just a year ago, an archaeological find 50 km away from Georgia’s capital, Tbilisi established that wine was being made in the area 8,000 years ago. Georgia has always boasted about its tradition of winemaking, but this was the first proof that it was the home of wine production because there has not been any similar find anywhere that is older. The evidence is a chemical found on a clay jar and the Guinness Book of Records has readily accepted the evidence.

Each region of Georgia has its own favorites with more than 500 different vines nationally. The Region of Kakheti leads the way with its most popular wines including Kisi. Saperavi, Rkatsiteli and Khikhvi. Kakheti produces almost 70% of Georgia’s wine by volume and grows 75% of the Country’s grapes, the main areas being either side of the Alazani River.

A few years ago, UNESCO recognized the traditional method of producing wine in Kvevri clay jars by adding that to the UNESCO Intangible Cultural Heritage List. Grape juice fermented and was placed into Kvevris which were lined with beeswax and covered with wooden lids and buried to get them to room temperature. It seems that some were left buried for half a century.

Many silver, gold and bronze relics from the 3rd and 2nd Millennia BC can be seen in the State Museum of Georgia bearing grape images. The Greek God of Agriculture and Wine, Bacchus, is regularly depicted. Moving into the 4th Century, and the arrival of Christianity, the importance of wine grew even further.

In more modern years, Georgia’s production increased due to the popularity of its wines in Russia although in recent year that trade has declined with Georgia looking for new markets to the West. The loss of the Russian market has actually resulted in a greater concentration on quality over quantity. In quality terms alone, those markets should open up. Here is further information on the wines and the qualities that new customers and visitors to Georgia can expect.

Why is Western Georgia Ideal for Wine Production?

The mild yet humid air of the Region, affected by the proximity of the Black Sea is ideal for vine growing. Extreme weather is rare with winters generally free of any frost. Summers are sunny while the natural springs flowing from the Caucasus Mountains add to the reasons why vines have grown so well over the years.

Kutaisi is the second-largest city in Georgia and definitely a place to visit if you want to learn more about Georgian wine. It is home to several UNESCO Heritage sites. There are famous family wine cellars in villages like Terjola, Chkhari and Bagdati where you are welcome to try the wines. However, if your time is limited, you will find wine bars in the City where you will find a wide range of locally produced wines. Sample some of the Imeretian and Megrelian wines with local cuisine; Imeretian cheese is one of Georgia’s best.

While in this region, several itineraries will recommend visiting Martvili Canyon on a day trip. If you take that trip, go to Targameuli where a family run business will introduce you to its wines which are still made in the traditional way without additives. The place is known as Oda and Vino Martville and opened in 2012 when the couple moved there from Tbilisi.

Its products have found an export market across the world; UK, USA, Poland, Japan and Australia are examples. There are still some bottles left for you to try and take with you.

The Grapes of Imereti

The range of grapes in this Region are too many to mention here but here are some important ones to remember.

This white wine grape is common throughout Imereti today yet a few decades ago it had almost disappeared. Its origins are the village of Sviri. One of Georgia’s best quality white wines is made using this grape in combination with Tsolikouri and Tsitska. There are differences in the wines depending on the time of the vintage with the classic European kind being from September but the sweeter varieties a couple of months later.

It is a grape that adapts to most types of soil, producing decent yields in all cases. However, high humidity and disease are enemies to its success. When the wine is made in the traditional Kvevri jars, you can expect a rich amber color in your bottle, and it is a wine that will improve with age. 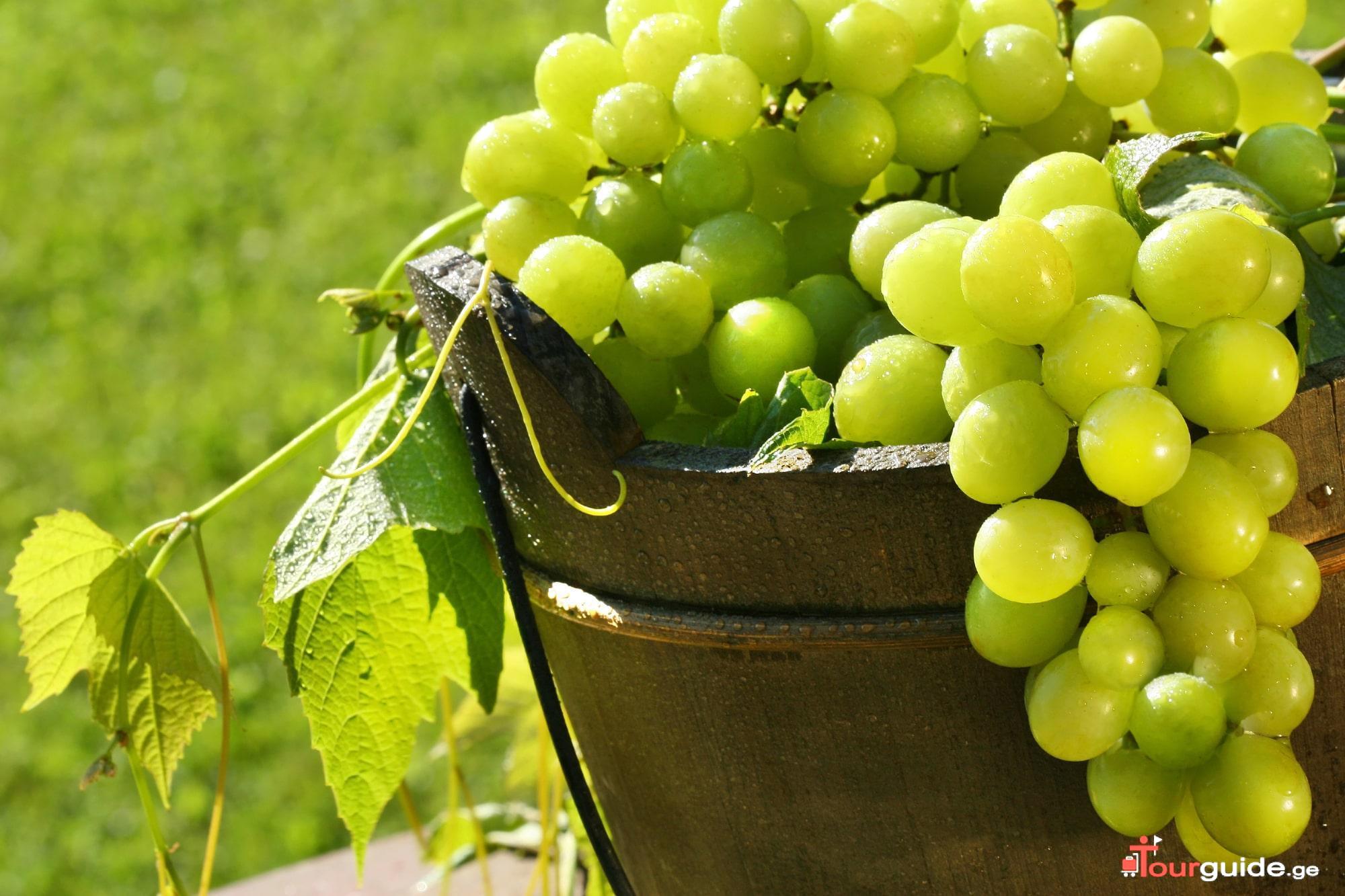 This high-quality grape is generally used to make fizzy wines and table wines. There are vineyards growing this grape in several villages in Imereti. Expect to see a clear, straw-colored wine which becomes softer with age while tasting and smelling especially fruity.

The grapes are medium-sized and grow in dense bunches. Ripening at the end of October, the yields are usually very good. 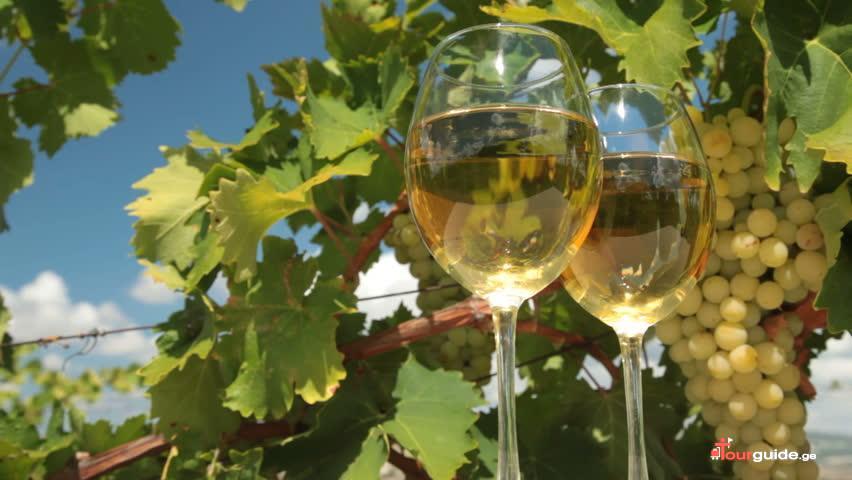 This white grape is also best for table wines as well as sweeter dessert wines. There are differences in the sweetness of this variety depending ion exactly where the producing vineyard is located. Middle and Lower Imereti varieties are sweeter than those in Upper Imereti.

It is an ideal grape for the relatively humid climate of Western Georgia as well as being fairly resistant to fungal diseases. It can be blended with other grapes but also stands on its own as a grape that will produce wines that age well. 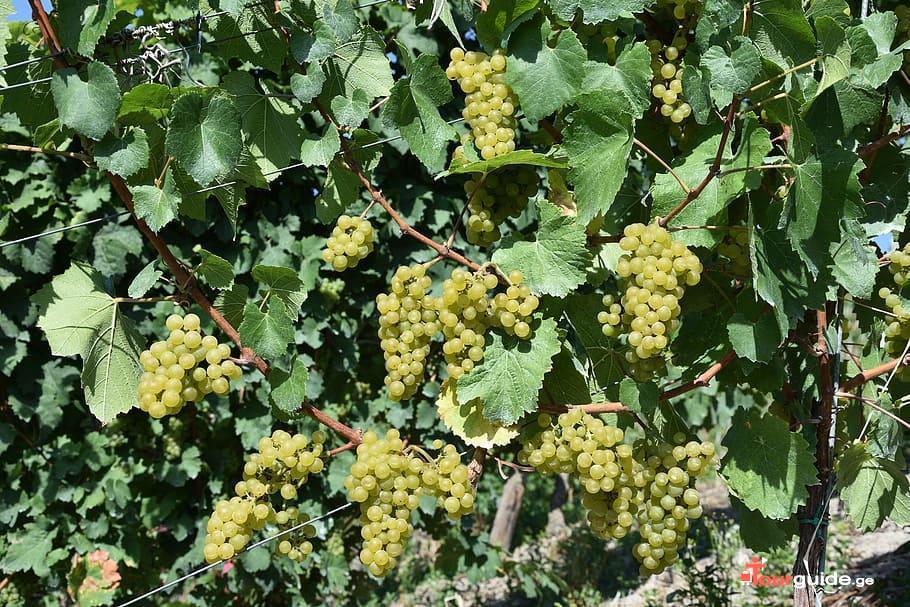 Otskhanuri Sapere is a red variety widely available in places such as Chiatura, Terjola,

Sachkhere, Zestaponi and Baghdati. On its own, it can produce high-quality reds with rich deep color, but it is also used in combination with other red and white grapes. Wine made from this grape is at its best once it is 10 years old or more and certainly loses nothing if it is left for several more years.

It is certainly one of the oldest grapes in Western Georgia. 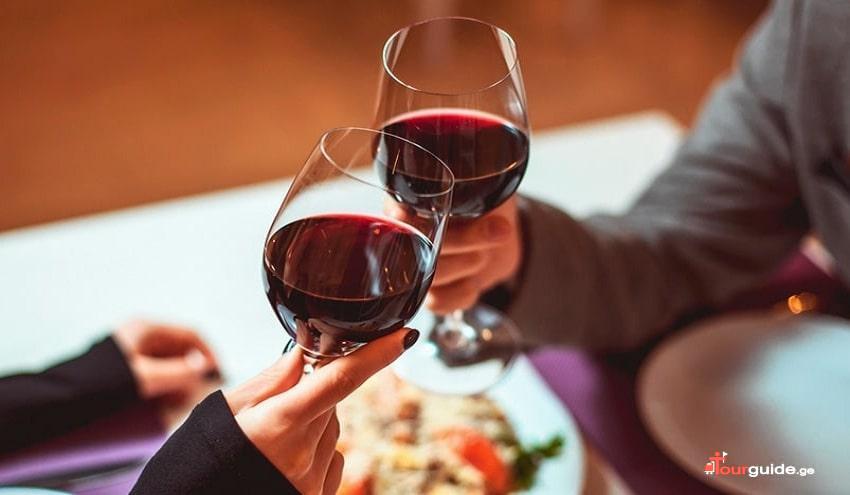 This red found largely in the Middle and Lower Regions of Imereti is another of quality. The wine it produces is not only full-bodied, but it has a rich aroma.

This grape gets its name from a village on the Lakanuri River though it is now planted in other regions of Georgia as well. Medium-sized grapes that ripen unevenly suggest that it is similar to wild grapes grown locally.

‘’Shavi’’ is the Georgian word for ‘’black.’’ This ‘’old black’’ grape matures in mid-autumn and while it is reasonably resistant to fungal disease, it does not like rainy weather. It does not have a reputation for producing high-quality wines and is often blended with other grapes such as Otskhanuri Sapere to produce basic red table wines as well as a rose.

The range of grapes in the Region of Samegrelo has dwindled dramatically over the years. The only one that is found throughout the Region is Ojaleshi, formerly known as Shonuri or Svanuri. It is capable of making strongly flavored wines, but the harvest yield is regularly low. It is dark in color as is the wine it produces and once again, it has a rich aroma.

Over time, fungal diseases were a regular problem to the Ojaleshi grape. Formerly, the vines were trained up trees (Ojaleshi actually translates into ‘’growing on a tree’’) but they are now proving more successful lower to the ground. It is harvested late in the season, the earliest the end of October. 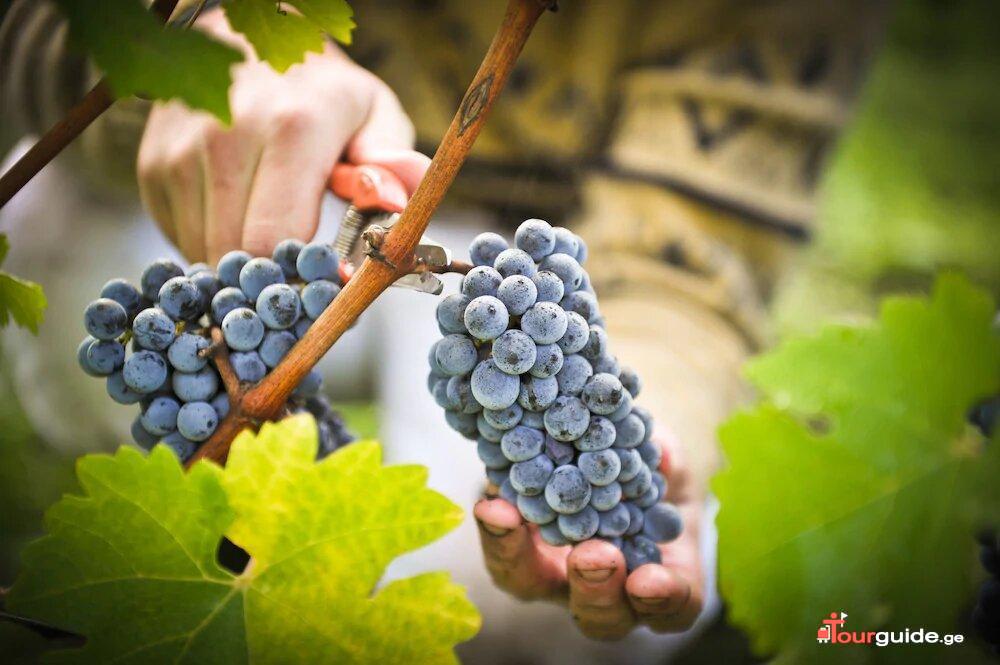 The Grapes of Guria

At one time, there were around 60 different grape varieties being grown in Guria, but that number has dropped dramatically. There a just a few people involved in the industry now who are intent on reviving winemaking. The common regional grapes are as follows.

This grape is a dark rose color and regularly a good harvest is produced. It is Guria’s most common grape and is sweet despite a slightly bitter taste. Expect a wine made from this grape to retain the rose color and to have a rich aroma.

It needs care and attention to produce good vines but the humidity, lack of frost and limestone soils are definite advantages in Western Georgia. It prefers southwest slopes without the glare of the sun. 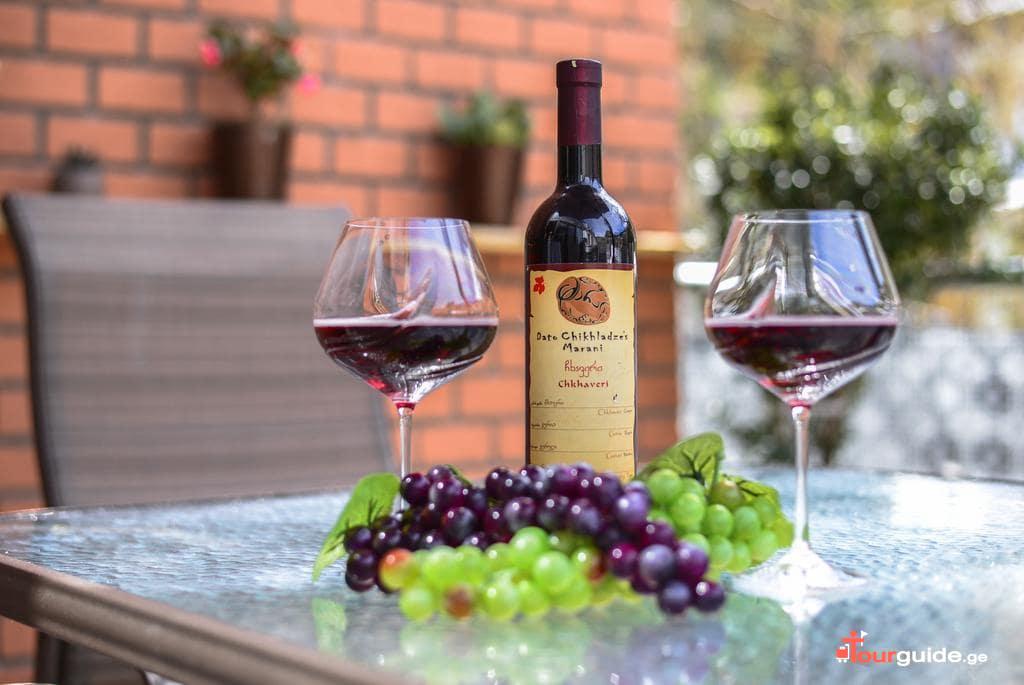 Jani, “strength” in English, is one of the vines in Guria that has begun the Region’s revival. Its berries are dark and need to be picked before they dry out on the vine. The wine made from Jani strikes a fine balance between sweet and acidic and is regarded as one of Georgia’s best.

Jani was hit by fungal disease a century ago, and the 20th Century was unkind to attempts to regrow vines. Fortunately, people remembered the quality of the wine it could produce and just a few years ago, a government initiative resulted in many acres of vines being replanted. The yield per hectare is regularly low, seldom more than 3.5 tons.

Mtevandidi grapes are dark, thin-skinned and sweet. The resulting wine is dark red with a good balance of sweetness, acidity and aroma. It is a wine that ages well, becoming richer in the process. 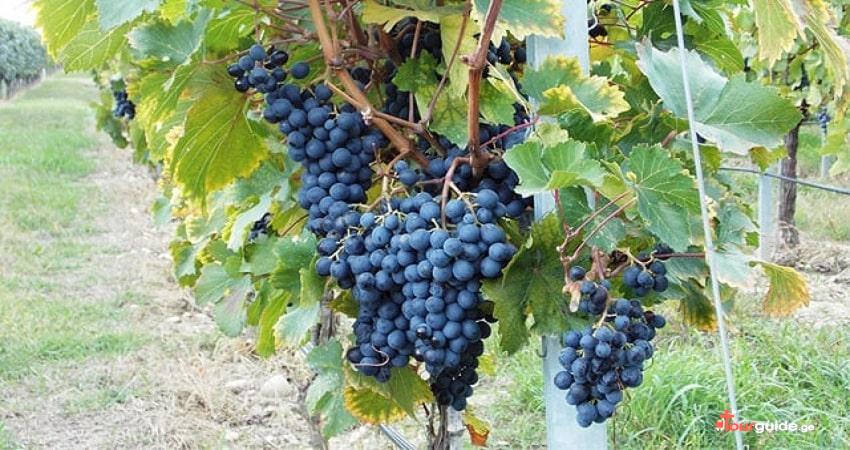 This grape is common to Imereti and Guria with the wine produced lacking the richness of other regional wines. It is light-bodied and somewhat pale in color. It gets its name from a village in Guria, Aladast. At one time growers trained the vines up trees but cane frames are now used.

The best place to ensure good growth is one with good lime content in the soil which must be well-aerated. That often means the lower slopes on hills. 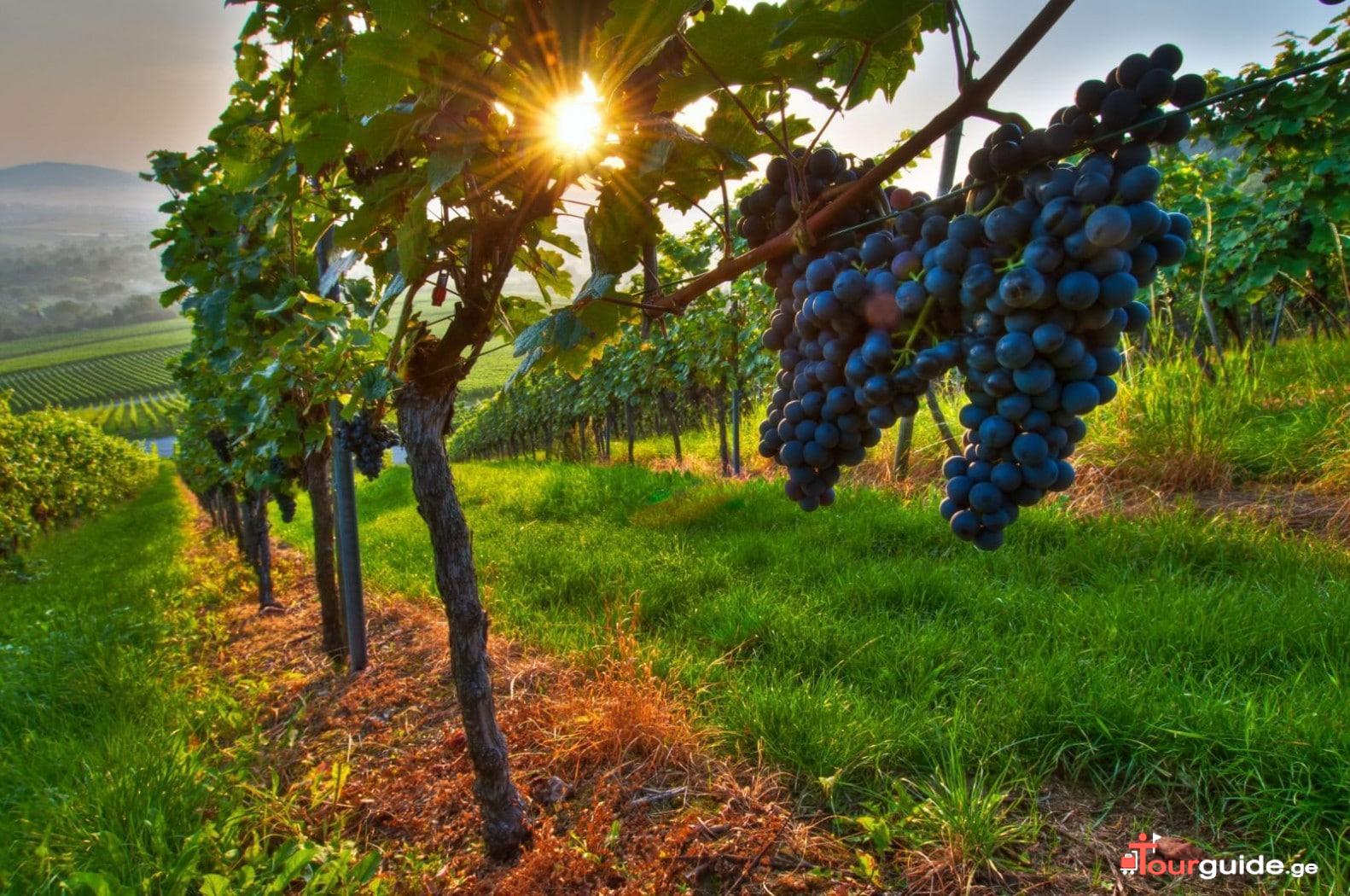 The village of Bukistsikhe in Chokhatauri is a good place to go to sample the wines of Guria. Teimuraz Sharashidze has a wine cellar that includes wines from 12 different grapes. He is intent on reviving more varieties and already has 8 others from which he is yet to start any production.

The cellar is in a traditional wooden house typical of Guria and the house itself is extremely interesting. Examples of the grapes that are being used to make his current wines include Aladasturi, Jani, Tsolikouri, Chkhaveri, Otskhanuri Sapere and Gurian Saperavi. 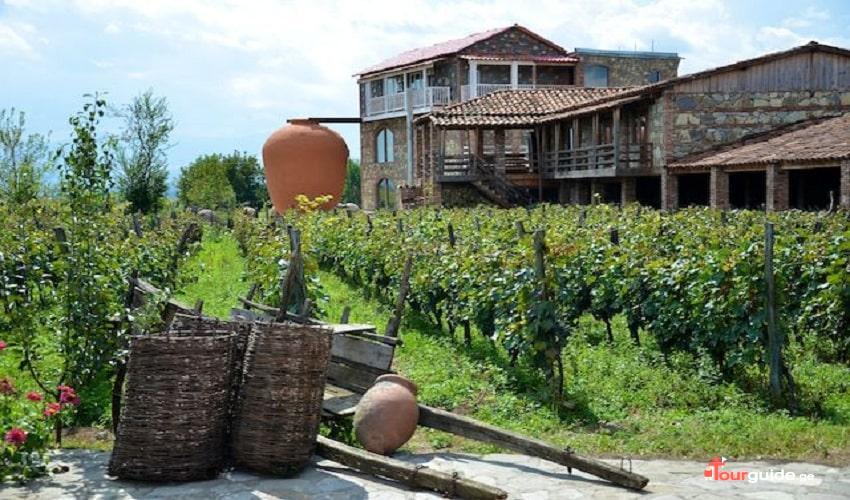