Svaneti is a province of Georgia, an area comprising exquisite nature, unique in this part of the area, with magnificent mountains, traditions, and culture. It’s in the north-western part and inhabited by the Svan people, an ethnic group of Georgia. Svaneti is named after this ethic group. World Heritage Sites, Ushguli and Chazhasi are close by, as well as the city of Mestia.

The landscape of this area is particularly mountainous, with deep valleys and gorges in-between, covered by beautiful forests of conifers, oak, beech, spruce, and heaps of other tree types. There are also plenty of grasslands and meadows in this area. It snows a lot here too, so you can imagine how magnificent and picturesque the snowy mountains, the lakes and conifers on the slopes look – like a postcard. One peak nearby is so high, Mount Ushba, that you can see it for miles off.

In this deep valley, it is a bird lover’s paradise. You will no doubt catch sight of owls, woodpeckers, falcon, wood pigeon, goshawks, stock doves, and many more. Actually, there are too many to mention. After all, the subalpine forests, meadows, the alpine tundra, and rocks make for a perfect habitat for birds to live and the perfect sites for watching them.

The Svaneti area is a humid area; the humidity arising because of the Black Sea nearby. The lower regions of Svaneti experience warm, long summers and snowy cold winters.

The Chuberi and Khaishi areas are unspoiled and untouched, with plenty of hiking routes so visitors can truly discover the hidden delights nestled in the Nenskra valley. It’s almost stayed untouched, with mostly the hospitable Svan people living there for centuries on end, with their own religious and cultural traditions.

There are amazing trekking experiences to be had in this area. The Nenskra river flows in the gorge and you might even spot bears walking around in the forest. The mountains that the Nenskra River originates from are called Azavchiber and the locals call the Nenskra River Chubrula – that’s why they call the area there Chuberi.  Chuberi actually means hazelnut in one of the Georgian dialects – that’s right because there are so many hazelnut trees here. There are many guesthouses in Chuberi too; one is even called “Nenskra”. It was one of the first guesthouses to host tourists, run by Melor Tsindeliani and his family. He says that “Georgians, and especially Chuberi residents, believe that a visitor is from God. This village was the most distinguished in the entire region. Although the Upper Svaneti villages have towers and good views, when people come down from there, they note that this place has better nature compared to other parts of Svaneti.” 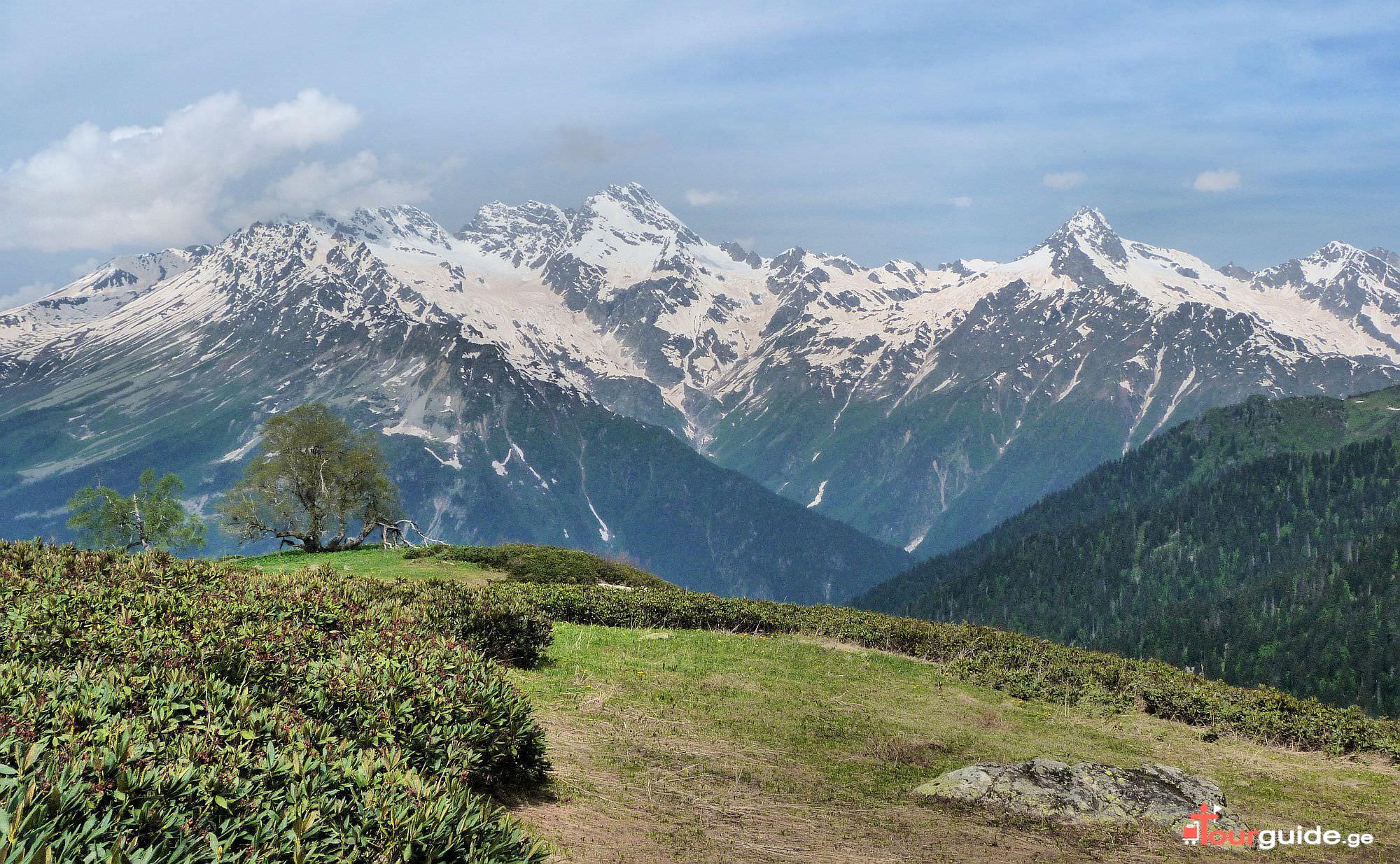 WHAT TO DISCOVER IN THE NENSKRA VALLEY

The three lakes mentioned above you will see on your way to the Utviri Pass. Tobuldari is situated 2300 m above sea level. The road that goes to Tobuldari Lake is a complex one so maybe it’s best to go with a driver with the right kind of car. About 5 km after that, you will go by foot to reach Ltnari Lake. Another of the lakes, Lamkhatobi Lake is harder to reach because it is much higher up, located at 3500 meters. 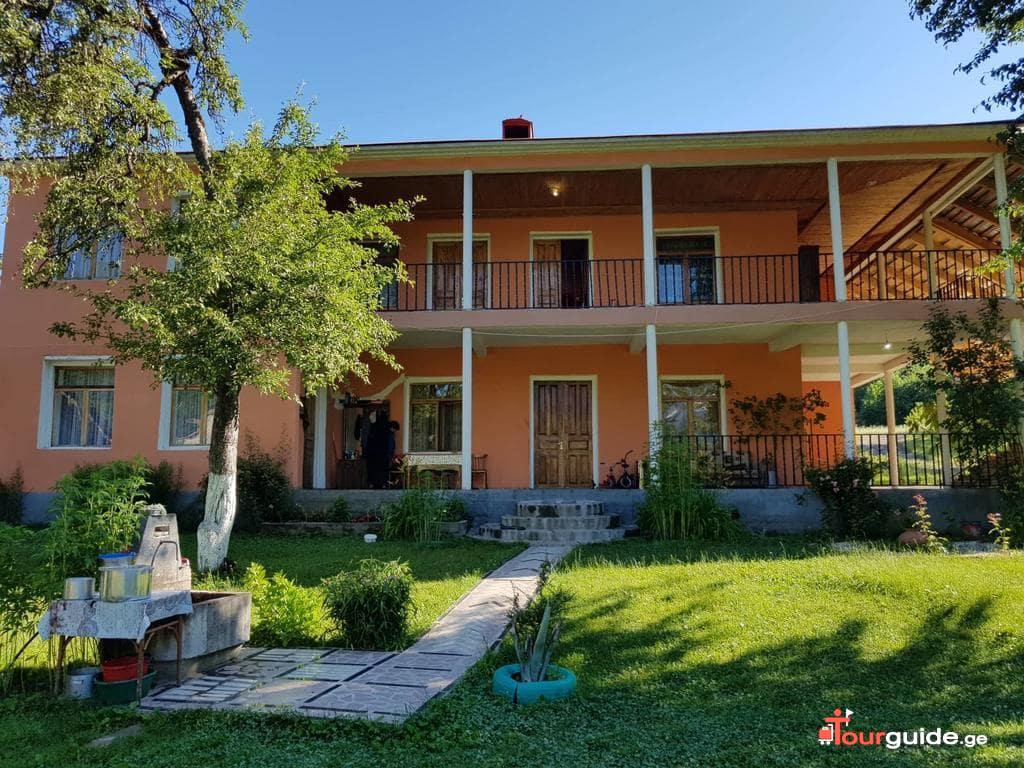 GOOD TIMES TO VISIT SVANETI AND THE NENSKRA VALLEY

Every single season and month has special reasons to visit, but lots of tourists choose the summertime because they love to come and hike. During the winter they come for the skiing. Browse here to see which will be the best time for you:

The best time for skiing is from the second half of December and usually, by April, the skiing season has come to an end. There are two resorts in this area, Tetnuldi, and Hatsvali. Some people like to visit here because they enjoy chilling out here in such picturesque surroundings when all the old villages are shrouded in snow.

These two months usually see fewer tourists because the skiing season has come to a close. It’s also a bit early for some serious trekking because there is still really a blanket of heavy, wet snow on the mountain passes. It’s still fantastic for sightseeing, though. In early summer, say late May to June, some of the hiking trails start opening. One famous one, Mestia-Ushguli, hikers get the privilege of enjoying stark contrasts from experiencing the green valleys and also the snowy mountains – it can rain as well in this period. If you didn’t know it, Ushguli is known to be the highest inhabited village in Europe!

The High season is (July – August)

This is the busiest time, and it is advised that you book your guesthouse for this period. The weather is wonderful during this time, with hot days and also some rain.

This is the perfect time for trekking because a lot of the crowds have gone and the days are dry. Not only are these months great for trekking, but nature lovers revel in the beauty of the trees as they put on their magnificent show of autumn colors. The snow is expected from around the second half of October.

This is the low season when the days are short and it is cold. However, being such a beautiful, well-loved place, many people find this a wonderful time to escape the crowds and enjoy the warm hospitality offered in Svaneti.

COMING AND GOING IN SVANETI

Getting around Svaneti is easy as well as complicated; however, motorways now connect all villages. There is a road to Mestia and even further on to Ushguli, so a good bet would be to catch a marshrutka, or even to hitch a ride. It gets more complicated when you want to get to the smaller villages like those in the Nenskra Valley because there isn’t public transport. You might need to take a taxi to these places; there are many taxis, but it is recommended you get prices from several to get the best deal. 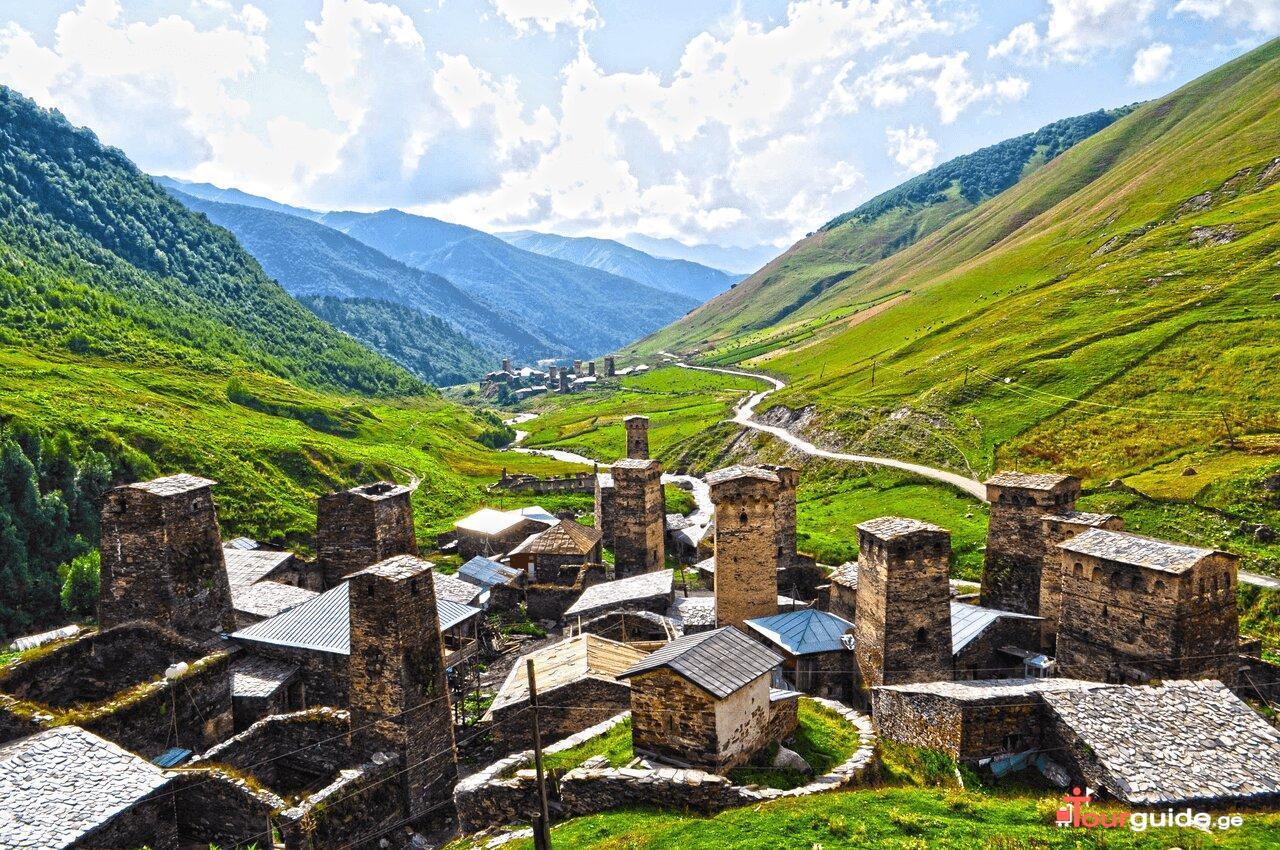 WHAT TO KNOW BEFORE HIKING IN THE NENSKRA VALLEY

Tourists wanting to hike the Nenskra Valley will make use of the hiking routes that go to Nenskra. For hiking in the valley, you will need the right kind of shoes and hiking equipment and of course, you will need warm clothes as well as a raincoat. As this magnificent area is noted as the alpine zone, carry some food with you as you are only likely to find berries along the route.

The secrets of this valley are just that, you are probably going to see and experience magnificent things that not many people have seen and done. As you travel on your way to Tobuldari you will go through forests with just mountains towering above you on both sides. Get out your camera, because you are not likely to encounter such awesome vistas too often again. You will hear springs gurgling on their way, providing natural cold and very clear water that comes from the mountains. When you get to the end of the forest, you will reach lowland – it is not likely you will come into lowland again on your hike; the hikes are ones usually surrounded by mountains with views of the gorgeous Alps. You can camp here too. 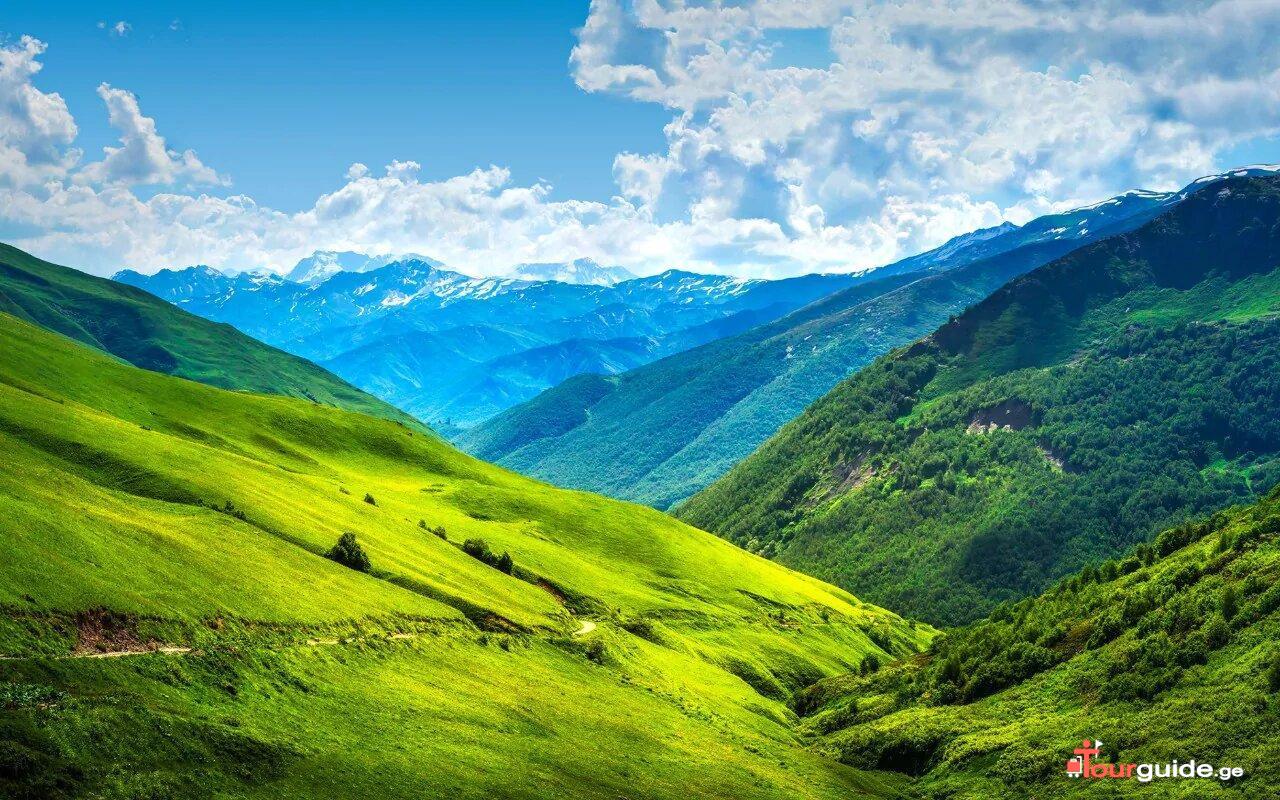 If you carry on towards Tobuldari, you will come across a wooden hut which the locals call a “tent”. You won’t be able to spend the nut in the “tent”, but you can rest in it because after all, you have already covered 15 kilometers of your hike. These wooden huts are typically what the shepherds use. Moving towards Utviri Pass, you will come across a little lake shaped like a heart. It is not always there though; after July, it disappears and ‘sleeps” until the summertime comes around again.

Lmakhatoba Lake is the lake above Ltnari. It is Lamkha for short and in Svan language means ‘a lake to call bad weather’. There is a legend that goes that the lake was used for water in the drought period and people would either throw a stone or a branch in the lake. If they did this, the weather would change and become cloudy and rainy. Don’t do it if you want good weather on your hike!

According to local residents, they say the main tourist destination in the Nenskra Valley is the Utviri pass – connecting the Nakra and Nenskra valleys, and of course its beautiful lakes. 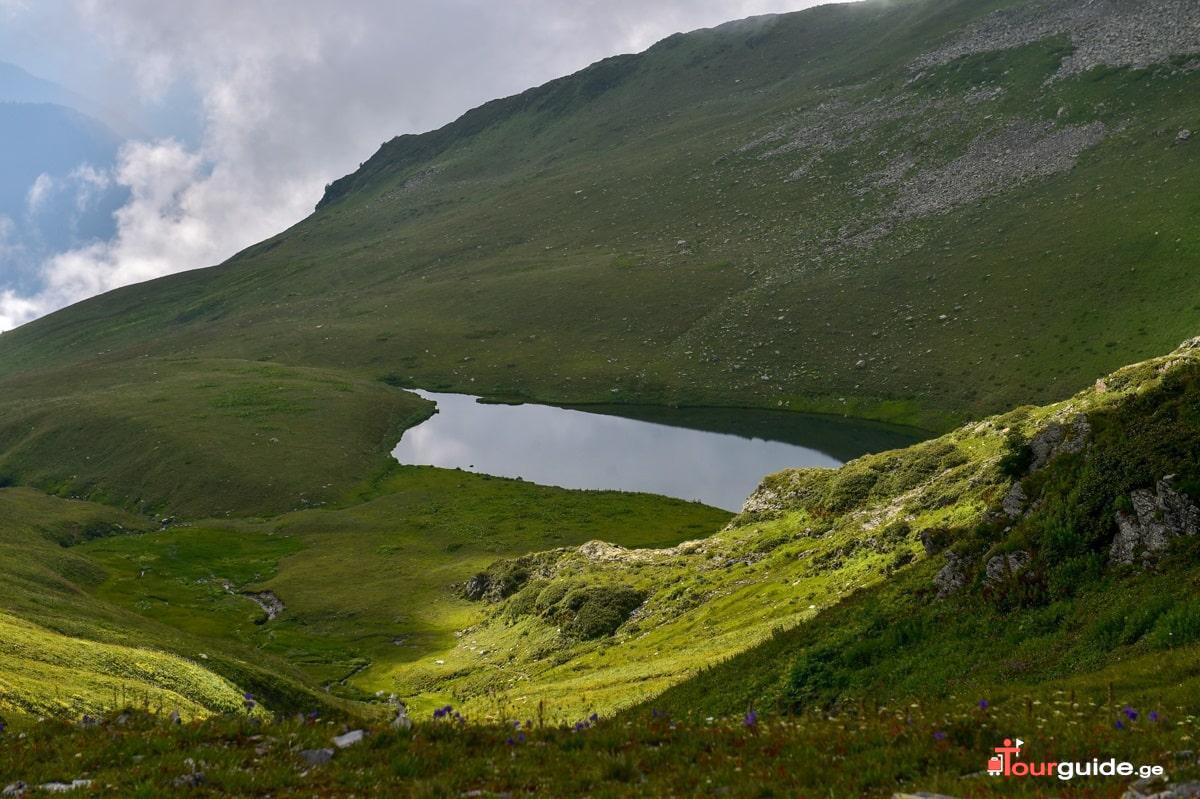 Special markings have been made for tourists

Members of the Transcaucasian Trail have been marking the way for tourists going towards the Utviri Pass. The Transcaucasian Trail (TCT) is a world-class hiking trail over 3,000 km long, and it follows the Greater and Lesser Caucasus Mountains, connecting around two dozen national parks and protected areas in this part of the world. The Caucasus is one of the most cultural, biological, and linguistically diverse regions in the world! Not many people have had the chance to discover its secrets. Many local and international hikers, map-makers and conservationists have started putting this area on the map so future generations can enjoy it. Tourists also end up saying they think Utviri Pass is one of the most beautiful places to see in Georgia.

Along the route, you will come to the village of Tita, ideal for those who love all things fishing. In this village of Tita, you might want to stay at Gia Vibliani’s place; he can offer you accommodation and meals. He says that the valley has so much potential, filled with natural lakes and beauty and so fascinating for tourists. He says that the people in the Nenskra valley “don’t have towers and museums, but we have nature, tranquility, peace”. 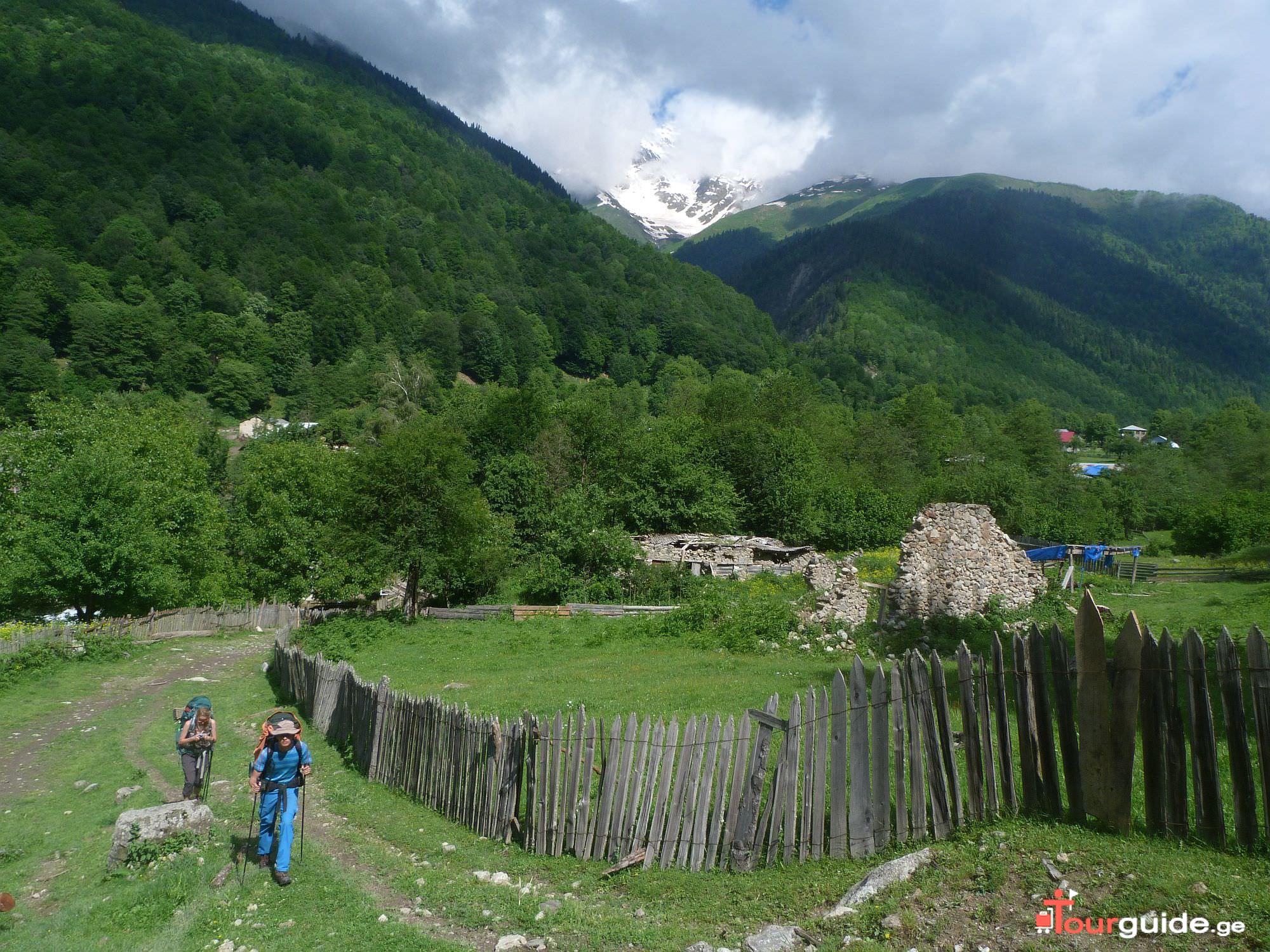 MYTHS AND LEGENDS REIGN IN THIS VALLEY

Beautiful Svaneti is a place of legends and myths, the people who live here believe in stories of ancestors and famous legends, like the goddess of hunting – Dali. She is very prominent in the stories of the Svan people. She acts as the patron of mountain animals like the ibex and the deer. Any of the hunters who obeyed her various taboos would have great success in their hunts, but on the other hand, she would punish anyone who violated them. It was said that she resided high up in the mountains in a cavern – keeping watch over the hoofed animals that lived on the cliff. Her story remains an important part of the Georgian culture and some of the older hunters still believe her to be real and that they might even encounter her in the deep forests and valleys. Hunters tell this folklore to their children so they learn how to respect nature and animals right from birth. All these legends and myths go hand in hand with the reality of Svaneti.

IT’S A GARDEN OF EDEN, THIS

They say a dam and hydropower plant proposed for the region could threaten the livelihoods of numerous villages perched in the valleys and flanked by the huge mountain peaks. The Svan people say this is “severe aggression against nature.”

The Nenskra Valley is a natural gem, to be found in absolutely pristine surroundings, and marked by majestic snow-capped mountains. Animals, birds, flowers, rivers, and flowers adorn this area and have made this their home over the centuries. It was always meant to be protected, this Garden of Eden, making it absolutely worth a visit – unfortunately, it has also become a biodiversity hotspot at great risk. Experience the delights of the Nenskra Valley before it gets scarred – you won’t regret it because the memories will last a lifetime.