If you have plans of traveling around Georgia, then summer is the best time of the year. There are so many more exciting things to do –like long mountain walks in some of our remote mountain regions. What about our canyons – and then there are our romantic beaches with sparkling refreshing waters? That’s just a start. Can we make some fabulous suggestions for you that won’t disappoint?

Tusheti is a pretty remote region, yet ranking as of the most charming; to be found in the northeastern corner of Georgia. It’s hidden between the valleys of the Caucasus and the pristine mountain peaks. To get there you go over the Abano Pass. Even though extremely beautiful it’s considered to be one of the most dangerous roads in the world – actually, you need a 4×4 vehicle to tackle the road. Add to that nerves of steel, but worth it all the way! The road to Tusheti is open only for 5 months (May to October).

Some of the places around here haven’t even been ‘touched’ by many visitors so when you get to see them, it makes you feel truly privileged to see such natural wonders of the world! It’s the ideal place if you are keen on horse trekking and hiking. Even in summer, nights can get cold so remember a warm jacket.

In many of the villages in this area, such as Omalo, the biggest village, you will find stone shrines with horns of sacrificed sheep or goats. You will also notice ancient towers steeped in mystery and intrigue standing around. These are known as keseloebi. You don’t have to rush if you long to linger; there are lovely guesthouses with superb Georgian hospitality that makes it all part of the experience. 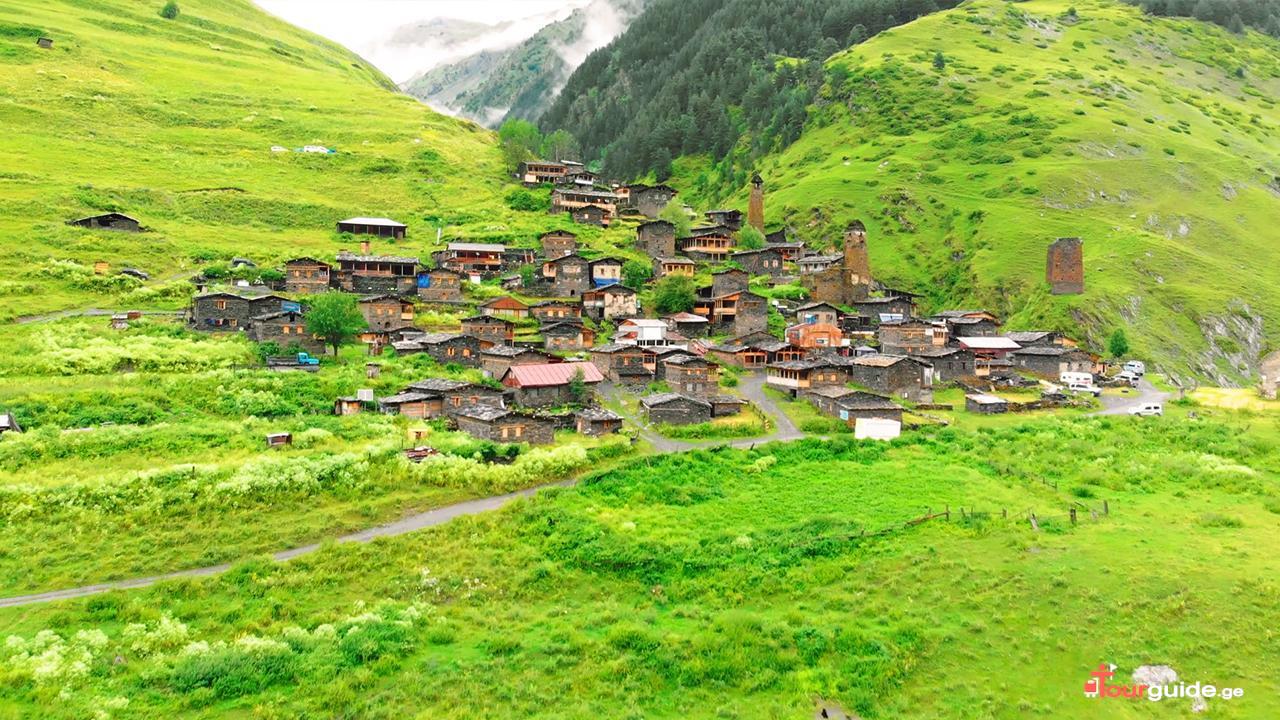 A lot of the villages in Tusheti are 2000 meters above sea level. Impressive views are to be seen over the grassy valleys of the South Caucasus. One of the prettiest villages around is Diklo village – don’t miss it! It’s got quaint old houses built of stone with huge wooden balconies. Look out for the functional Orthodox Church in the area. Dartlo village is about 12 kilometers on from Omalo village. Try and include Parsma and Girevi villages as well! Some of the villages, like Parsma; can’t even be reached by car. You have to walk or go on horseback.

Take a tour to see the most sought after canyons in Georgia; Martvili, Okatse, and Dashbashi. Dashbashi Canyon is quite close by; a mere 109 km from Tbilisi, truly one of the most exciting places in the country. Take note of the “weeping wall”, it’s a wall of many little waterfalls. It is so picturesque, it’s picture-perfect!

Okatse, near the Imereti region, is just an hour’s drive from Kutaisi. This canyon is about 100 meters deep, and you can walk on a 700 meter-long hanging walkway to the viewing point and then on to Kinchkha waterfall. This waterfall is considered one of the tallest in the country.

Martvili Canyon is spectacular, and you can take a boat ride through a part of the canyon and admire moss-covered trees along a walking trail. 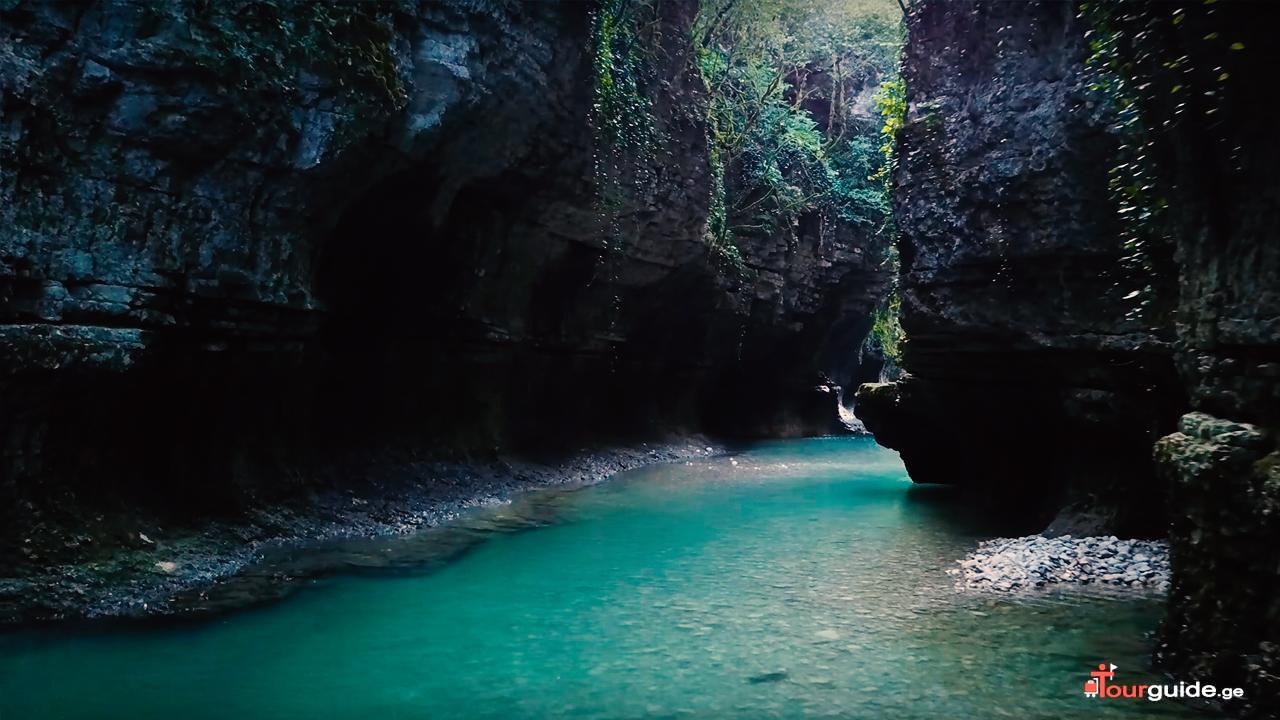 Because it is so close to the capital, Stephantsminda is a very popular place to stop over; it is breathtakingly beautiful. It’s also known as Kazbegi, surrounded by the massive Caucasus Mountains. It was a Georgian Orthodox monk called Stephen after which this town was named; he built a hermitage here, later to become the Georgian Military Road. This place is famous, too, for the special medieval Gergeti Trinity Church with its neighboring bell-tower. What a photographic hotspot with the magnificent backdrop of Mount Kazbek. 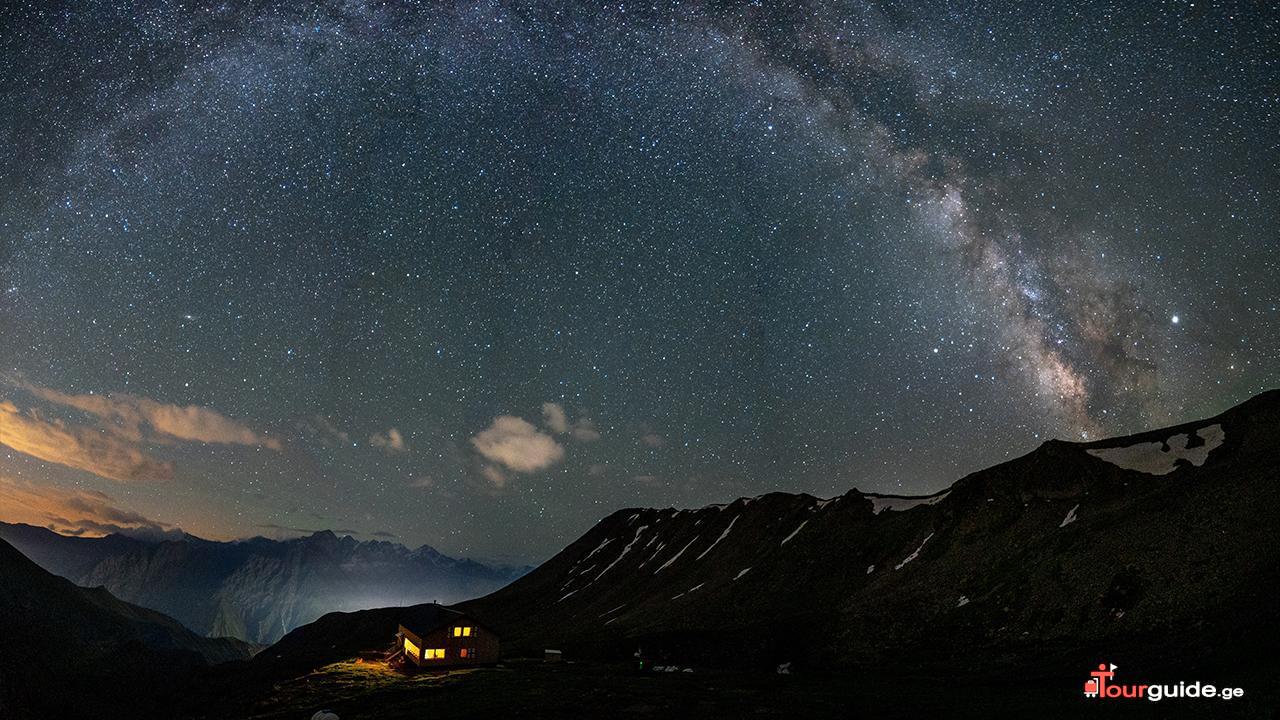 If you want to escape the main cities, come to the Guria area, it’s in the eastern part of the country with the Black Sea as a border. Ozurgeti is its capital. It has abundant greenery, with forest beech, pine, and fir trees in abundance as well as a bevy of forest animals.

Visit cultural sites such as the Likhauri church, the Askana Fortress, the Jumati or Shemokmedi Monasteries, as well as the palace of Prince Gurieli. Here are 4 resorts you should try and visit:

The Guria region is noted for its delicious local cuisine – don’t go away without a taste of the famed Gurian Pie, a crescent-shaped cheese bread stuffed with boiled egg and cheese. If you fancy something sweet afterward, try janjukha, made with nuts and grape juice. Unforgettable times can be spent tasting the local wines and chacha. 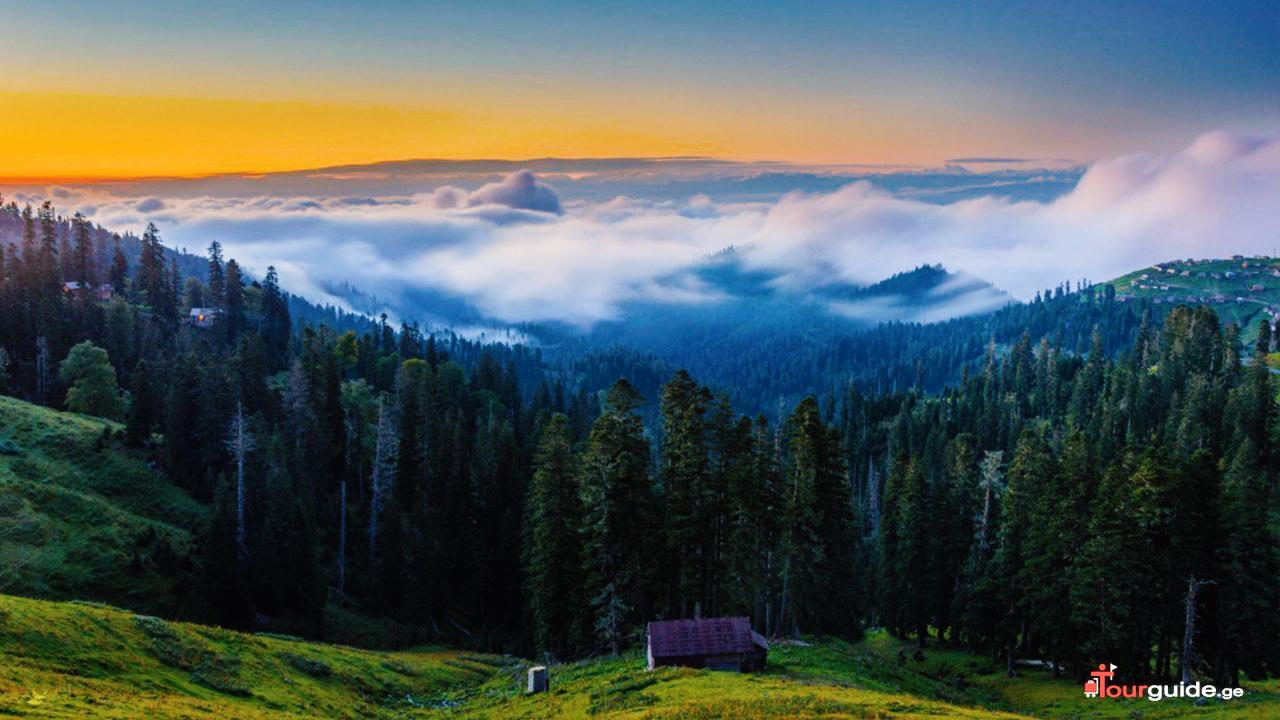 Ravishing Svaneti, a world UNESCO-listed site in Georgia, home of the traditional Svan people. The Svan people are very self-sufficient, possessing cultures that have survived thousands of years.

View the watchtowers of Svaneti, set against the peaks of the Caucasus Mountains; left over from medieval times. These towers have withstood centuries of floods and avalanches, protecting the people through the years. Mestia is the capital of Svaneti and the tourist center. It’s got hotels and guesthouses for you to stay over – the popular Hotel Svaneti is the only hotel though, with a spa and sauna. Other nice hotels are the Mountain Mestia, Old Seti, or the Lileo Hotel. The best guesthouses are here too if you would rather stay in more family-run accommodation, such as the Elite House Mestia. Chalet Mestia, Bapsha Guesthouse and the Svan House in Mestia are other good options.

When night time falls, all the restaurants and cafes come alive with sounds of traditional music performed by the local bands. 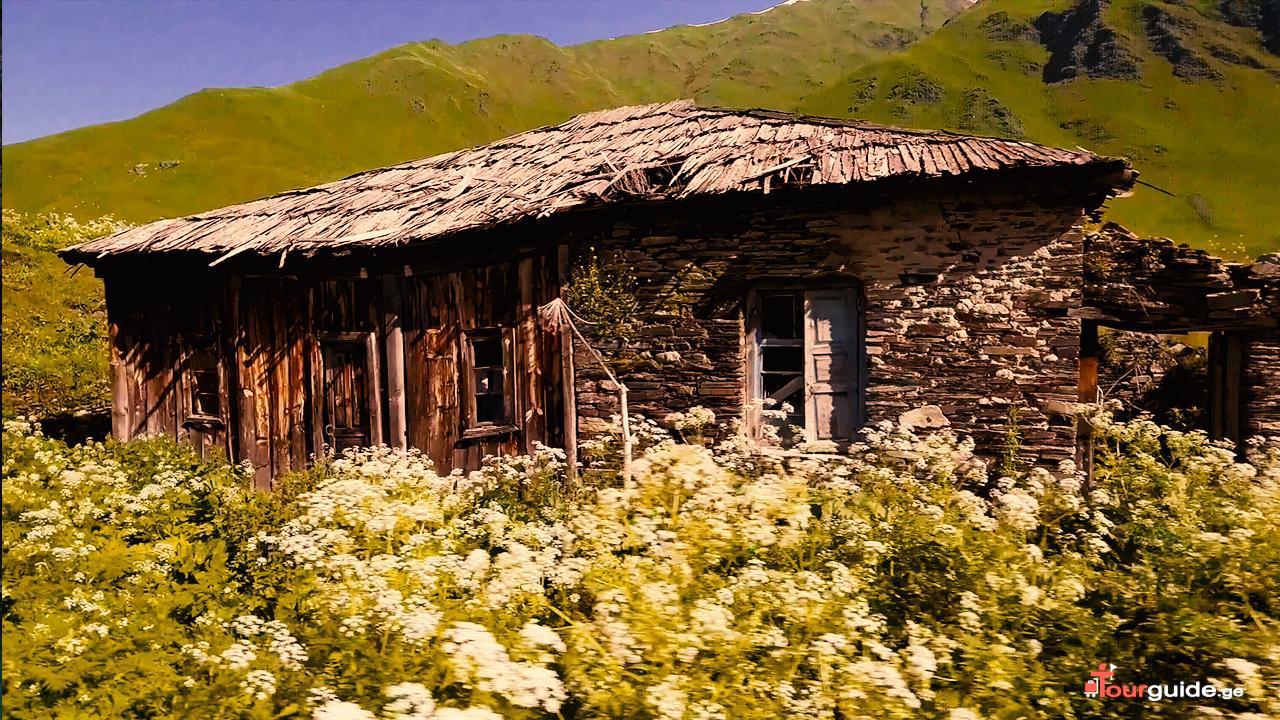 Ushguli consists of four villages tucked into the mountain. You need to visit as part of a tour group or by hiring a 4×4 to endure the 2-hour bumpy ride to get there. Even though tourists can visit for a day, it is suggested you stay overnight in Ushguli to soak in all the excitement and magic. Try Ushguli Panorama Guest House or Hotel Tekla – there are a few delightful places. If traveling to Svaneti sounds like something you cannot miss out on, and yet you find it a bit too hectic to organize yourself, a tour company can handle all the logistics for you. This allows you to just sit back and relax and let the guys who know it all to organize it for you – a great way to explore! 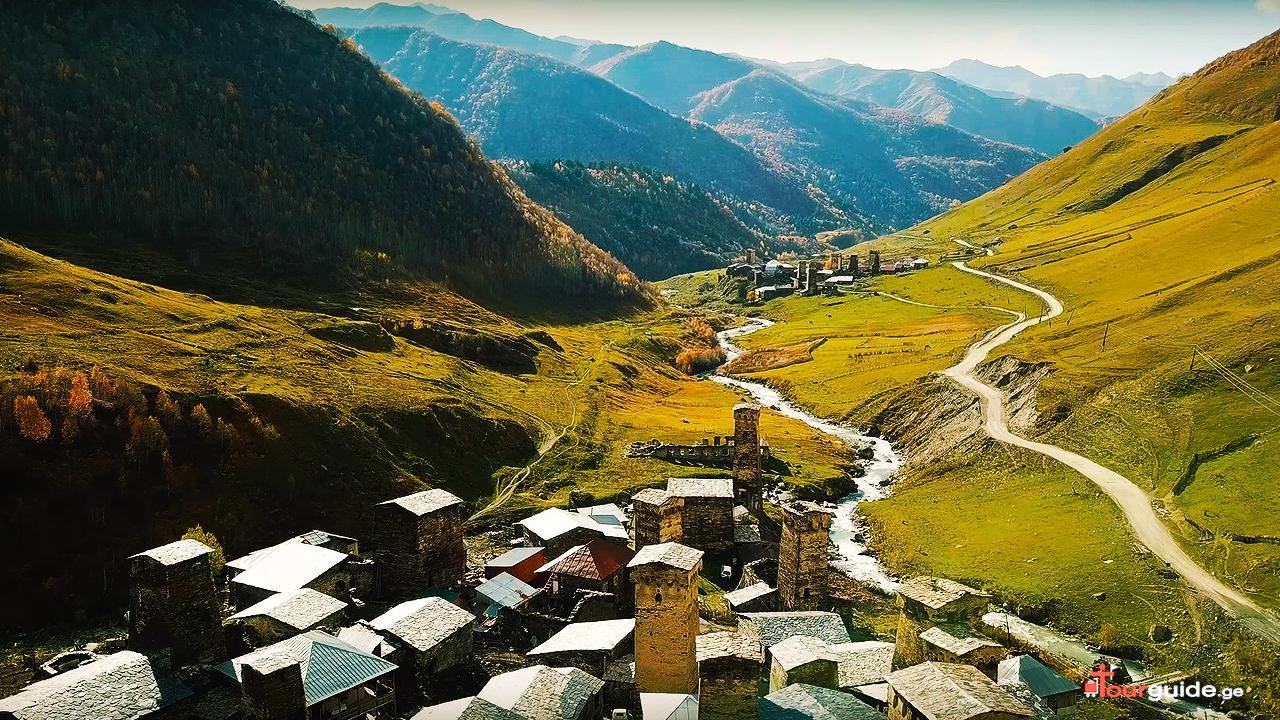 To get to Svaneti though, to start your adventure, you can either fly there via government-subsidized flights from Tbilisi, but you need to book well in advance as they get pretty booked up. Another way is the Marshrutka, or bus. They usually leave often every morning from Tbilisi, and it’s a grueling 8-hour trip to get to Mestia. The bus costs around 30 GEL. Then there’s the train; in fact, this is the most popular route to Mestia from Tbilisi – an overnight train to Zugdidi. Then you transfer for a 4-h our journey to Mestia.

The summer months in Georgia from around June to early September are the warmest and most popular time to visit Svaneti. This is when the hiking trails are open and when the nights are at their warmest – you just have to remember that in summer, the nights can still be quite chilly.

THE HATSVALI-ZURULDISKI LIFT IN MESTIA

Ride this lift right to the top and enjoy a meal and of course the view in Restaurant Zuruldi, it’s the highest restaurant around in Georgia. The lift tickets cost 15 GEL for Adults or 10 GEL for children. You are also able, if you want, to hike to the top and then you can ride down in the lift for free. 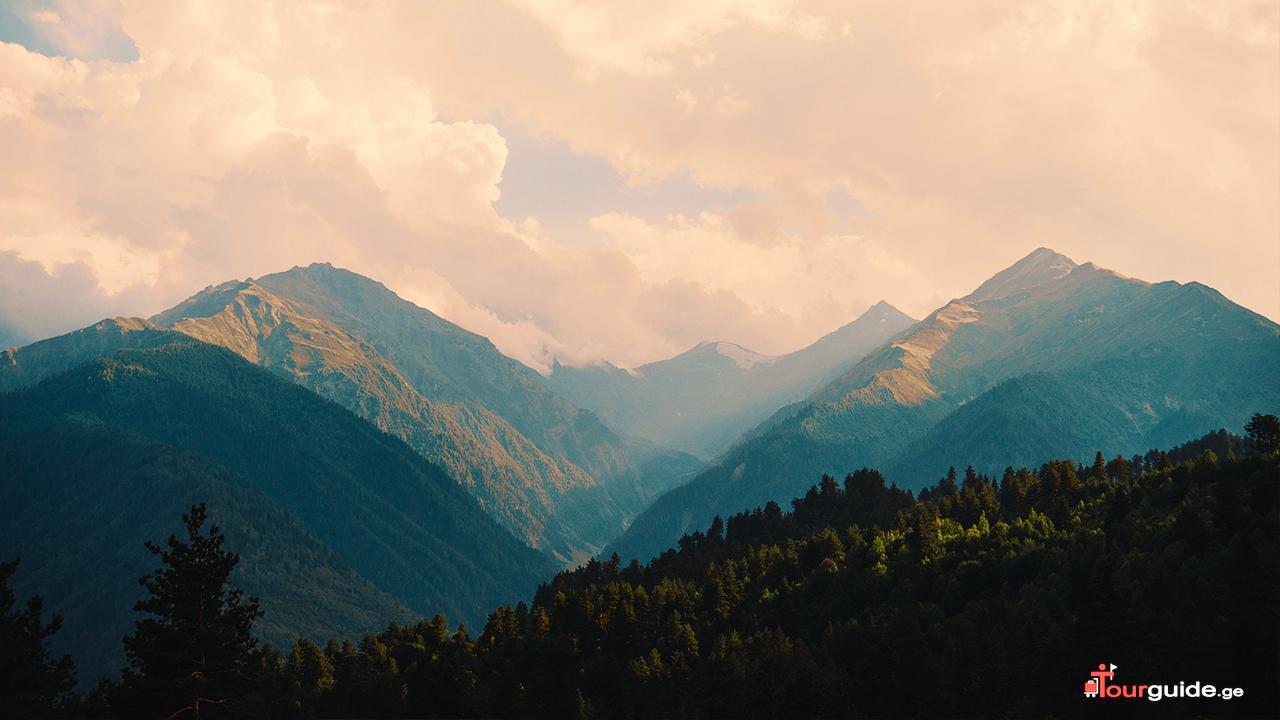 A very popular music festival to visit is the Tbilisi Open Air one, organized every June. This festival is for you if you are into rock and electronic music. It’s a blast if this is your thing and lasts for 3-4 days. If you can’t bear the thought of not attending each day, there are camping areas near the site for those who want to stay nearby. 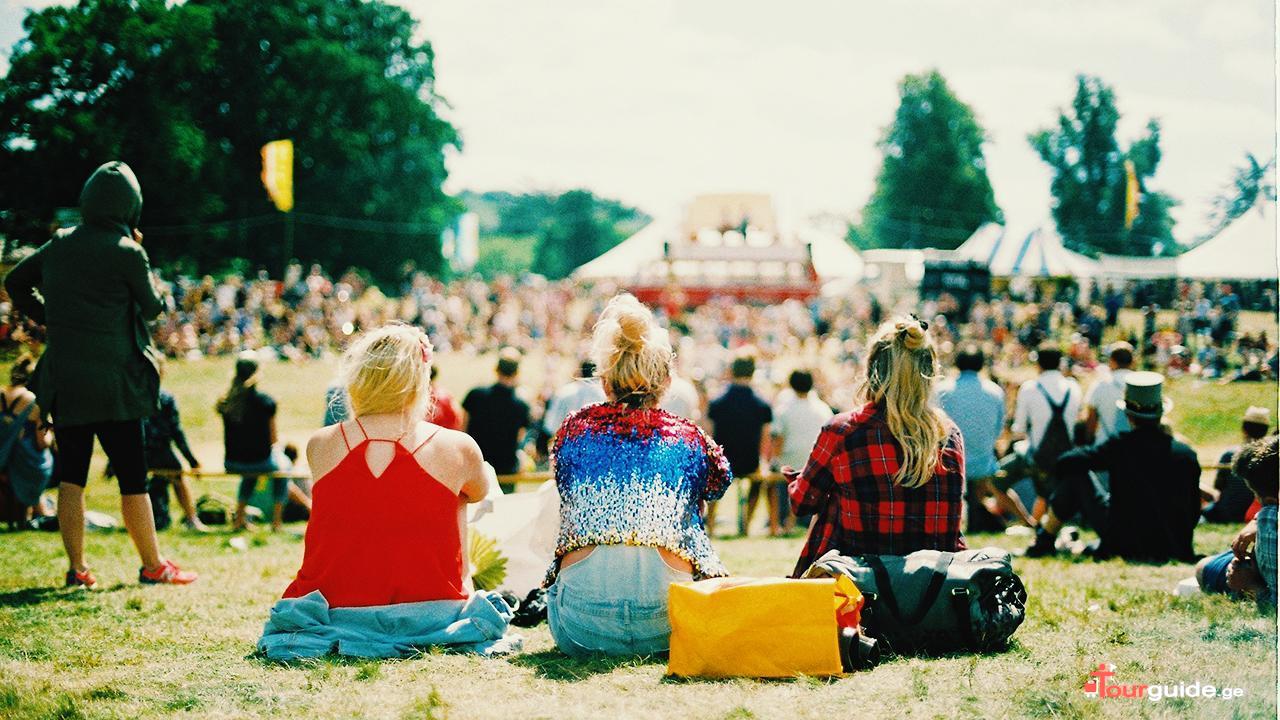 About 53 miles from Tbilisi, you will find Gori. If you enjoy history this is the birthplace of Joseph Stalin, where even his house is featured and his private railway carriage he traveled in. 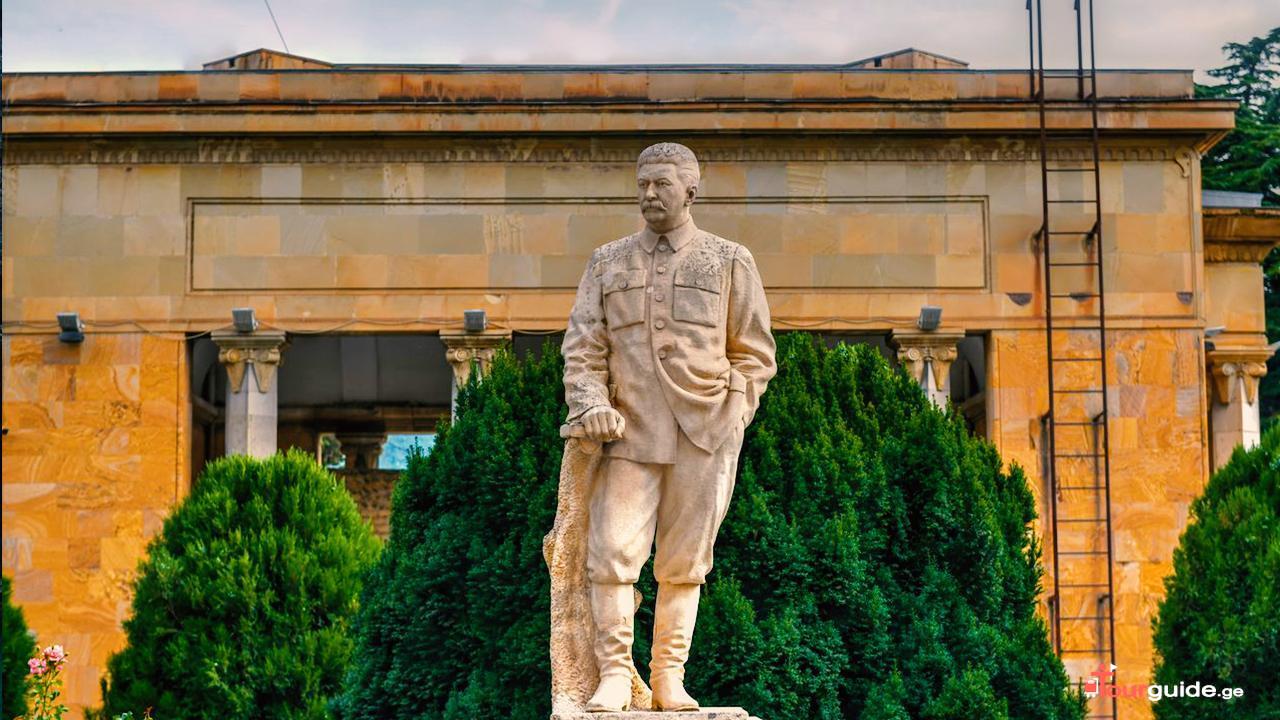 These lakes are situated in a mysterious, magical place, with views over the majestic Chiukhi Mountains. There are heaps of myths and legends surrounding these lakes. Getting to the lakes doesn’t involve a whole heap of energy if your only intention is to see the lakes. All three lakes are situated near the village of Roshka, in the Khevsureti region. In one day you can view all three lakes, but you would need to stay overnight in the village or you can also erect a tent at Green Lake. The most spectacular of the lakes is White Lake, so white, that at times it seems to be a baby blue color. 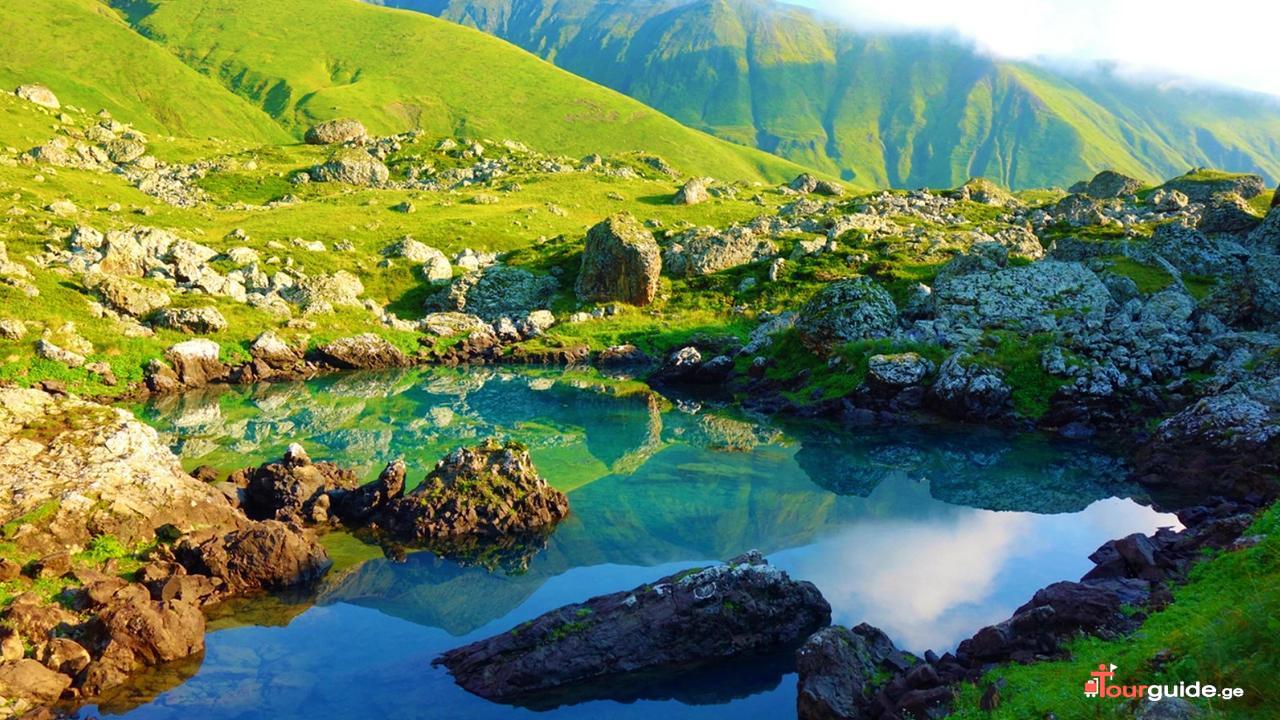 If you are an adrenalin junkie, hiking these beautiful areas is a must, but if you want to go on and on, and add more exciting adventurous pleasures to your list there is paragliding, parasailing as well as white water rafting, speed racing at the Rustavi International Motorpark, balloon flights, jeep tours, amongst others. The summertime is the ideal time for these types of sports. 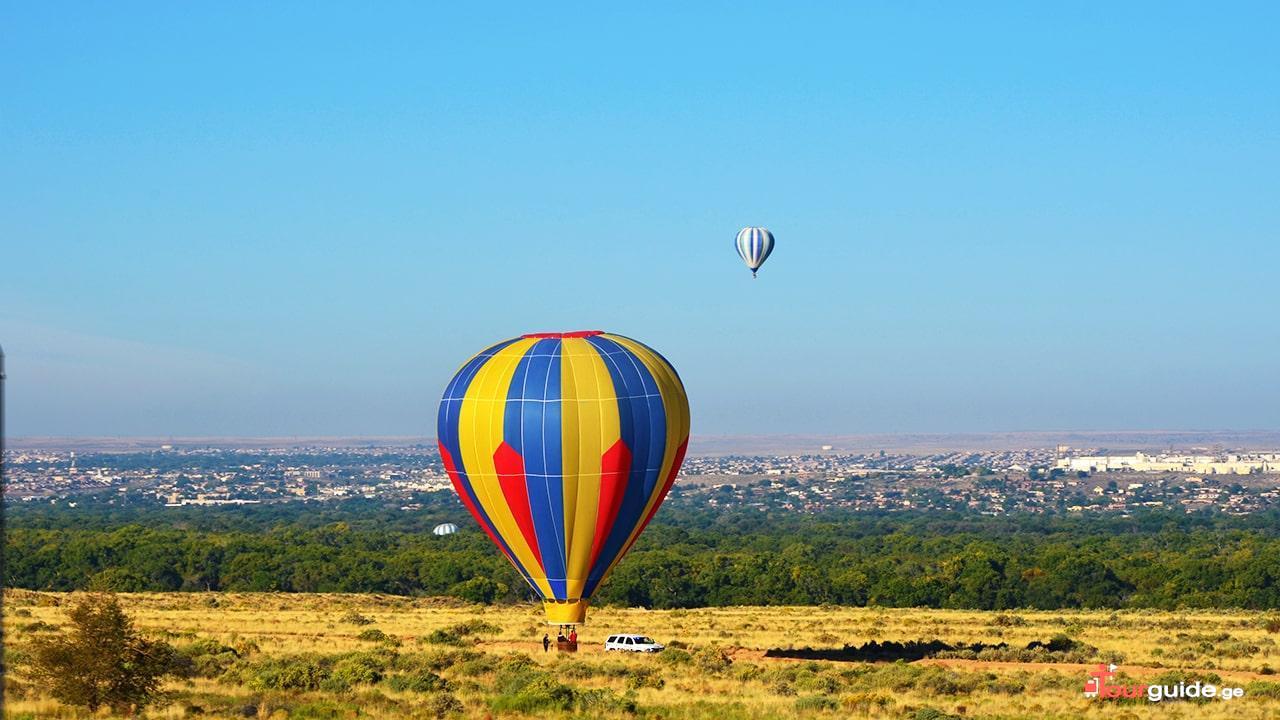 The bustling town of Batumi, the capital of Adjara, is situated on the Black Sea Coast and not to be missed. In the summer months, locals and international tourists swarm to this main seaside resort. There are heaps of cafes, hotels, bars, and clubs. Here, you will find national parks of natural mountainous beauty such as Khulo, Kintrishi, Beshumi, Machakhela, and Mtirala, to name a few.

Enjoy some jazz at the Black Sea Jazz Festival 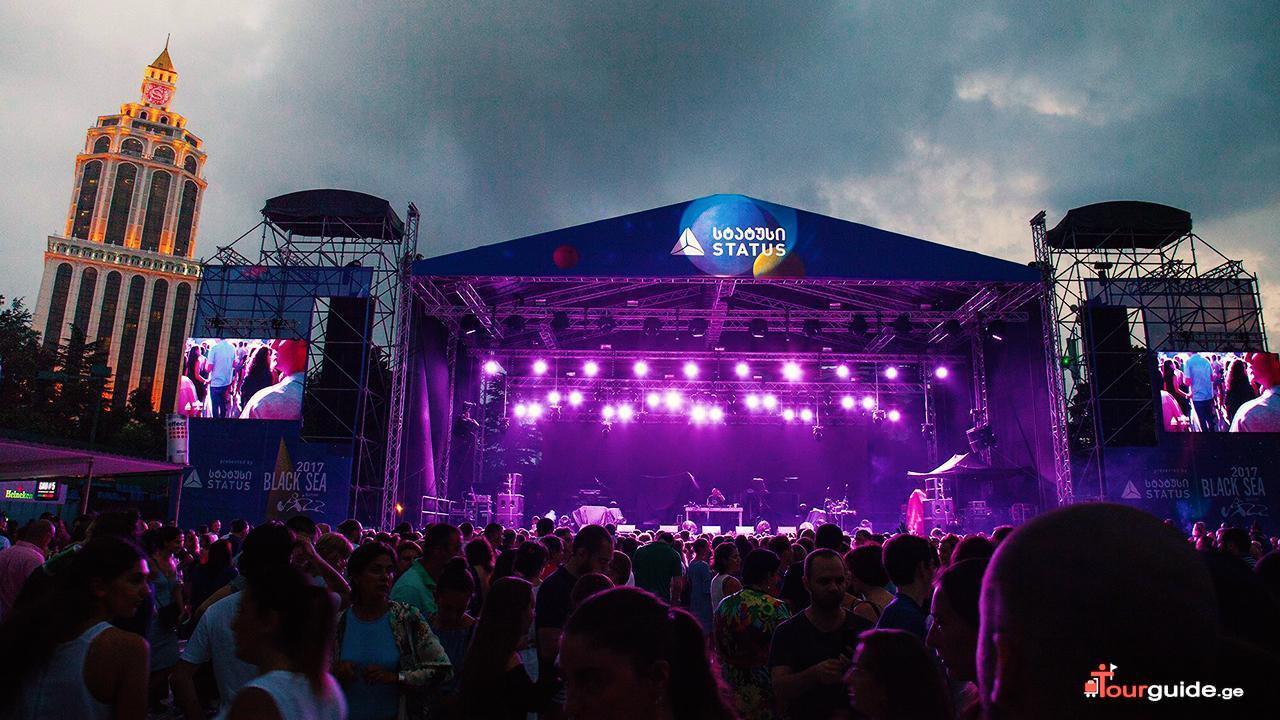 Kvariati, also to be found on the Black Sea coast, is another popular holiday resort, offering the sea and the mountains. If you’re not enjoying the blue waters and golden beaches of Kvariati, you can enjoy shopping at the Istanbul Bazaar Shopping Centre or the Batumi Dolphinarium or let Lady Luck entertain you at the Casino Campione – all of these destinations are close to Kvariati. 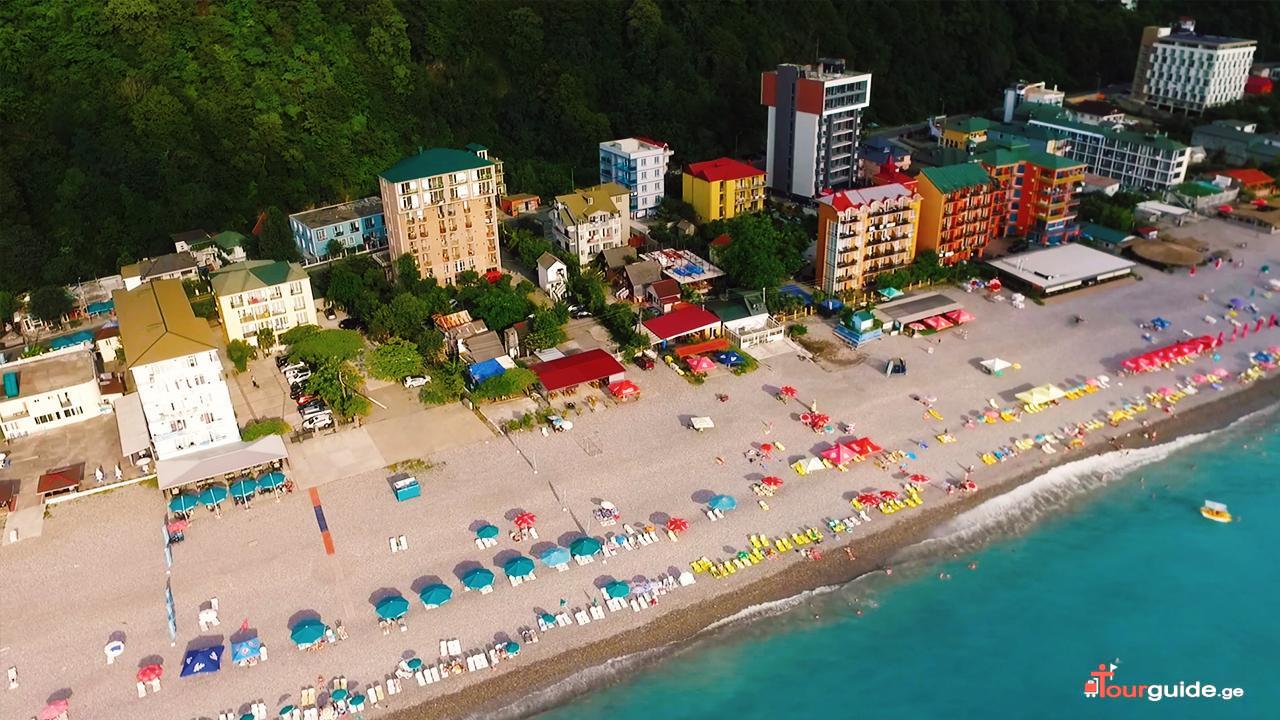 GEORGIA IN THE SUMMERTIME MAKES YOU FEEL FREE AND EFFERVESCENT

OK, while Tbilisi and the Caucasus Mountains are really what has drawn and continues to draw people when it comes to Georgian tourism, the other places mentioned above are becoming so popular. It makes perfect sense because a guest is a gift from God, so the saying goes in Georgia. Visitors are plied with delectable foods and drinks, and a toast is always ready for the visitor. Who wouldn’t want to toast to summer days in glorious Georgia – the Georgians welcome you so that you can’t wait to come back again!